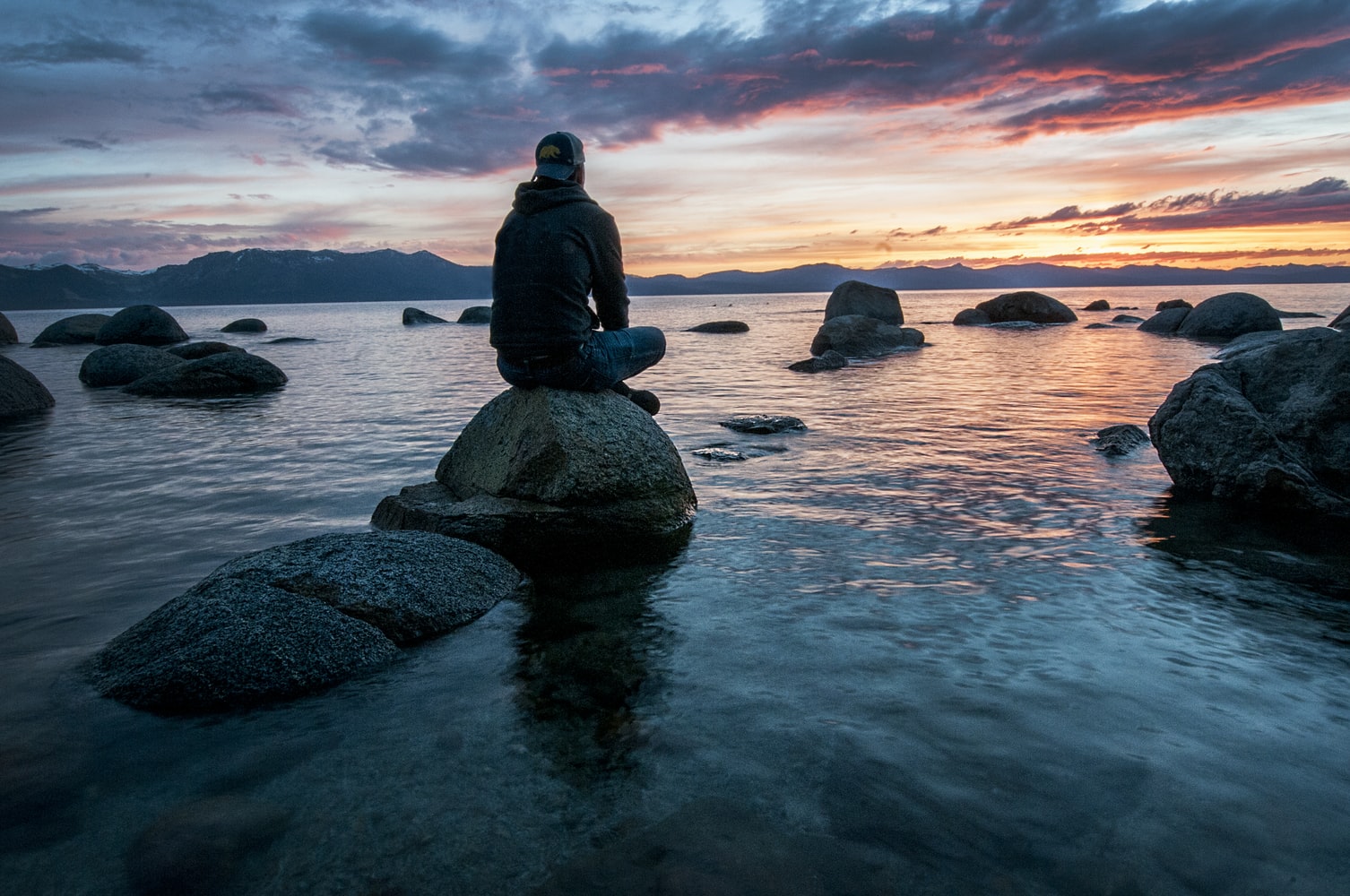 Solitude has become a topic of fascination in modern Western societies because we believe it is a lost art – often craved, yet so seldom found. It might seem as if we ought to walk away from society completely to find peaceful moments for ourselves. Yet there is a quote I really like from the book Solitude: In Pursuit of a Singular Life in a Crowded World (2017) by the Canadian journalist Michael Harris:

I don’t want to run away from the world – I want to rediscover myself within it. I want to know what happens if we again take doses of solitude from inside our crowded days, along our crowded streets.

Steadily, slowly, research interest in solitude has been increasing. Note, solitude – time alone – is not synonymous with loneliness, which is a subjective sense of unwanted social isolation that’s known to be harmful to mental and physical health. In contrast, in recent years, many observational studies have documented a correlation between greater wellbeing and a healthy motivation for solitude – that is, seeing solitude as something enjoyable and valuable. But, by itself, this doesn’t prove that seeking solitude is beneficial. In science, to make such a causal statement, we’d need to isolate ‘solitude’ as the only variable, while holding other alternative explanations constant. That’s a difficult challenge. In daily life, we spend time alone while also doing other things, such as working, grocery shopping, commuting, taking a walk, learning a hobby or reading a book. Arguably, with so many variations in the ways that people spend time alone, it is difficult to make a definitive statement that it is solitude per se that enhances our wellbeing.

By conducting experimental studies – in which volunteers spent time in controlled conditions in solitude or with others – a team of researchers, led by the clinical psychologist Netta Weinstein at Cardiff University and me, overcame the shortcomings of the correlational research, shedding light on what solitude is really good for.

In one series of studies, we looked at how people’s emotions changed after spending time alone. We measured positive emotions associated with high arousal, such as excitement and energisation, and positive emotions that are low in arousal, such as calmness and relaxation; we also measured high-arousal negative emotions, such as anger and anxiety, and low-arousal negative emotions, such as loneliness and sadness. By covering both poles of what psychologists call ‘affective valence’ (positive vs negative) and ‘affective arousal’ (high vs low), we demonstrated that time spent alone offers a unique opportunity for ‘arousal regulation’ – that is, both positive and negative forms of high arousal drop lower when we spend time alone. We called this the ‘deactivation effect’.

While the deactivation effect was consistent across all the solitude and alone conditions that we devised, changes in low-arousal positive and negative affects depended on how motivated a person was to spend time alone. If volunteers embraced and enjoyed solitude for its benefits, they tended to experience an increase in positive low-arousal emotions – ie, to feel more relaxed and calm afterward – but if people didn’t value spending time alone, they were more likely to experience an increase in negative low-arousal emotions – ie, to feel sad and lonely.

This means that, in order to gain more from spending time alone, it is important to be open to the benefits that solitude can bring. For many people now experiencing restrictions on their movements and their social lives, it will be a lonely time; for some of us, it might be a chance to try experiencing the benefits of unexpected solitude. While it might not improve our life as a whole, it can make momentary bouts of negative emotions more bearable.

If we can benefit from the deactivation effect (that is, lowering our levels of arousal) simply by spending time alone, does it matter whether we go on social media, during that time, or do something else? I get asked that question often. The evidence we’ve gathered suggests that browsing on your phone doesn’t cancel out the deactivation effect. However, it takes away a different benefit of spending that time alone without an occupying activity: the opportunity for self-reflection.

In our studies, we define self-reflection as the act of attending to one’s thoughts and feelings. In two experiments, we found that those who were in complete solitude, without a secondary activity, self-reflected more than those who read alone. Those who were alone, browsing on social media, were the least reflective. In fact, if you are someone who tends to be self-reflective, our research showed that time alone is most enjoyable if you allow yourself to sit in solitude rather than reading or using your phone.

Of course, this is not a new insight. It has been widely suggested in popular books and philosophical texts that time spent alone is good for self-reflection. Yet, not all self-reflection during time spent alone is qualitatively the same: it can be insightful or ruminative. In our current experiments, when Weinstein and I ask participants to describe a time when they were alone and felt inauthentic or ‘not true’ to themselves, this is characterised by the ruminative variety of self-reflection, filled with negative thoughts and regrets from which they couldn’t get away.

When self-reflection turns sour and rumination takes over, mindful practices might be an effective strategy for some people to calm their repetitive negative thoughts. However, this suggestion should be taken with caution as mindfulness doesn’t work for everyone and might be best practised in moderation. So, alternatively, it might not be a bad idea to break the solitude and reach out to a trusted friend, even if by a phone call or message. If you have a choice, it’s never advisable to remain in solitude when it’s no longer fruitful, particularly if you feel that rumination and worry are causing you distress.

Time alone is an opportunity for us to hit the reset button, to calm our high-arousal emotions. During the time we spend alone, we also have the option to seek complete solitude, to drop our daily activities and find a space to attend to our thoughts and emotions. Yet, if daily solitude is a lost art, as Harris suggests, how do we find the motivation to harvest it?

The answer depends on the individual but, surprisingly, not so much on whether you are an introvert or an extravert. Instead, our research shows that a healthy motivation for spending time alone is linked to a personality characteristic called ‘dispositional autonomy’, which describes people’s capacity to regulate their daily experiences at will. Essentially, this means that embracing solitude is more about having the ability to self-regulate your emotions than about how introverted you happen to be.

People with an autonomous personality feel that they have chosen to do what they’re doing, instead of seeing themselves as pawns at the mercy of the external environment. Having this approach to life is also about taking interest in every bit of your experience, trying out new experiences and exploring how you feel about them. Indeed, when we created a manipulation in the lab where some people were forced into experiencing solitude (thus reducing their sense of autonomy) and others were invited to take interest in it and try it out (fostering their autonomy), those who were forced into solitude saw less value in experiencing it and, in turn, derived less enjoyment from it.

It is important to note that all the volunteers tested in these studies were university students in the United States. Thus, these findings from 2017-19 tell us about the daily experiences with solitude of young adults in societies that offer easy access to many entertainment options and flexible working hours. In a culture fuelled by fast-paced lifestyles and convenient technologies, we are easily pulled by our devices and our obsession with productivity. When we are alone, we find ourselves working, and when we have a free moment, we want to catch up with what other people are doing by picking up our phones. This can be true even when people are in lockdown and unable to socialise in person. Such a mindset, in which we actively seek to avoid solitude, only increases the chance that we’ll find the experience unpleasant when it arises. Conversely, by seizing the opportunity for relaxation and reflection afforded by moments (or even stretches) of solitude in our busy lives, we can reap the benefits. Time when we are unexpectedly alone can be difficult but, at least for some of us, it can also be a blessing in disguise.