Classic Article by Nita Arnold from 1951

What basic principles of Adlerian-Psychology should be accepted by every Adlerian? Before we can answer this question we have to clarify: what is Adlerian Psychology? It is a science developed by Adler which attempts to understand and explain human behavior. Not all psychologists try to do this. As a student of psychology, on might be interested in testing or measuring, in animal experimentation in perfecting description of psychoses for the purpose of diagnosing mental illness. All of these approaches will not make you an Adlerian or exclude you from being one.

Adlerian Psychology is interpretative; it is an endeavor to understand human behavior. There are other psychologies which, like that of Adler, are dynamic, depth psychologies. Principal among these ar the systems of Freud and Jung. However, Adler has developed his science in a direction essentially different from that of Freud and Jung Some of his principles are not exclusive to his psychology nor are they original with Adler. Similar ideas, in some instances, have been expressed either in philosophy centuries ago or even in psychology shortly before the publication of his chief works.

It is rather the totality of Adler's principles, woven together into a workable system, which give a key to the understanding of human behavior and the possibility of altering it. This is his great contribution, and it is the acceptance of this system in totality which makes an Adlerian.

In all fields where human behavior, either individually or in group is studied, as in psychology, anthropology, sociology, criminology psychiatry, or where efforts are made to alter behavior, as in education or psychotherapy, his system is applicable. All principles of his system are interdependent; therefore, the following enumeration of such principles in numerical order is by necessity artificial.

1. Life is directed movement. The moving force is the desire for survival, the goal is security. Life may be interpreted as a movement to compensate for inferiority feelings, as if one wanted to reach a point above from below, where one would be freed from all inferiority feelings.

It is then that the child forms his life plan or life pattern, which is a plan - his own unique creation - for getting along in such a world as he sees and has come to know. He sets his goal, which is his concept of security; he devises methods, choosing some and discarding others. It short, he develops his life style, which is his way of relating himself to life.

His goal of security naturally can never be reached; it is not know to him consciously and could not be expressed by him verbally. This goal determines all expressions of his personality, his actions, feelings words, dreams, what he forgets, and what he remembers.

3. All behavior is purposeful; we are not driven by a cause, but drawn by our goal, which, however, we were free to set in our childhood. Once the goal is set we are determined by it in all our action' as if "caught in an iron shirt."

4. Adler calls his psychology "Individual Psychology," according to the Latin individere, "do not divide." The organism-as-a-whole acts and reacts always in totality, never only through one of its parts.

5. An individual's behavior can only be understood in relation to society. Here, his specific unique concept of security causes him to develop either cooperative or other methods in his effort to achieve success, based on his fictitious "private logic." Adler found that early recollections and dreams have a specific meaning to the individual and fit into his purposeful pattern of behavior.

6. Adler came to his discoveries from the observation of "abnormal behavior." Thus he found a new approach to psychopathology. Abnormal behavior, criminal actions, problem children, prostitution, sexual pathology, can be understood by the application of the above mentioned general principles.

7. Furthermore, an Adlerian also believes in the possibility of altering behavior; this alteration can be achieved by scientfic methods developed by Adler. An Alderian applies specific methods of education or psychotherapy in his respective field as teacher, parent, physician etc., based on a framework of general principles. They are essentially an attempt to recognize the goal of the individual, his life plan, the methods he uses to relate himself to life, and to give this knowledge to him. This understanding provides "insight. It is an essentially Adlerian approach to encourage in order to change the patient's misconceptions of life which he formed in his early childhood. This enables him to give up his efforts to secure himself according to his private concepts and to accept a cooperative goal. Then he can learn to use cooperative methods. Adlerian therapy helps him develop his social feeling which we all have at birth but which, according to Adler, has to be developed.

8. An Adlerian is one who accepts Adler's principles of psychology of psychopathology, and uses his methods, applying his science in all fields of life for the welfare of the people.


This stylish Alfred Adler Heart Shape Word Cloud T-Shirt is perfect for anybody with an interest in Adlerian psychology. Also ideal for helping to promote Adler's groundbreaking concept of social interest "Gemeinschaftsgefühl"; i.e.,  the importance of feeling engaged and connected with one's community, which is as relevant today as it has ever been. Sales help support All-About-Psychology.Com which has been providing free and comprehensive information and resources for psychology students and educators since 2008. 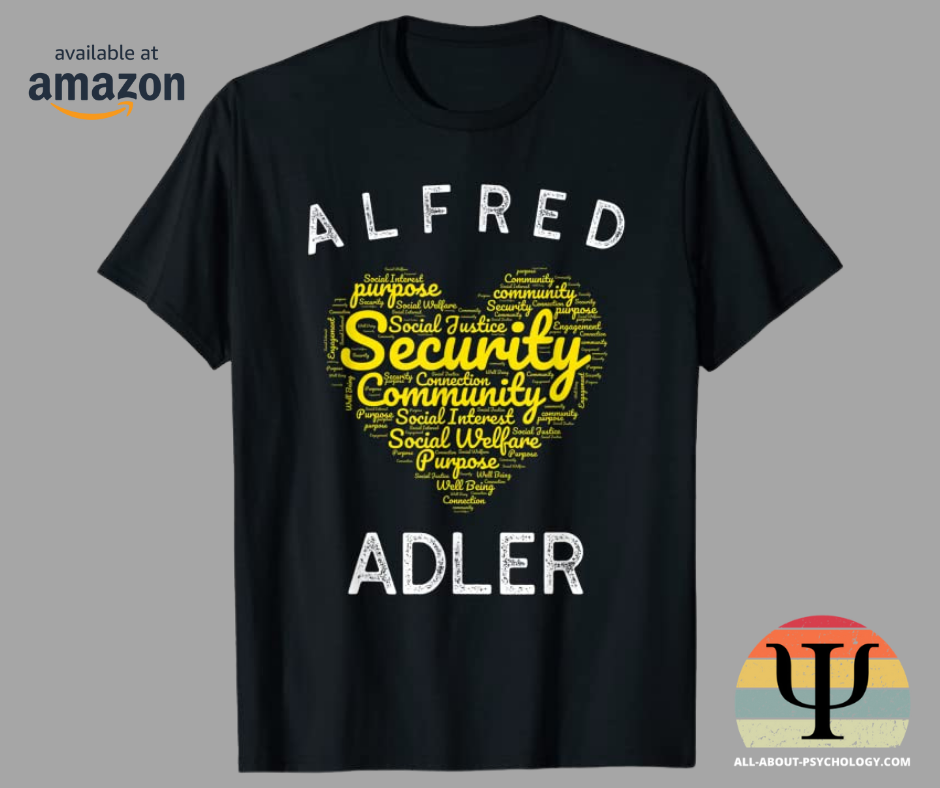