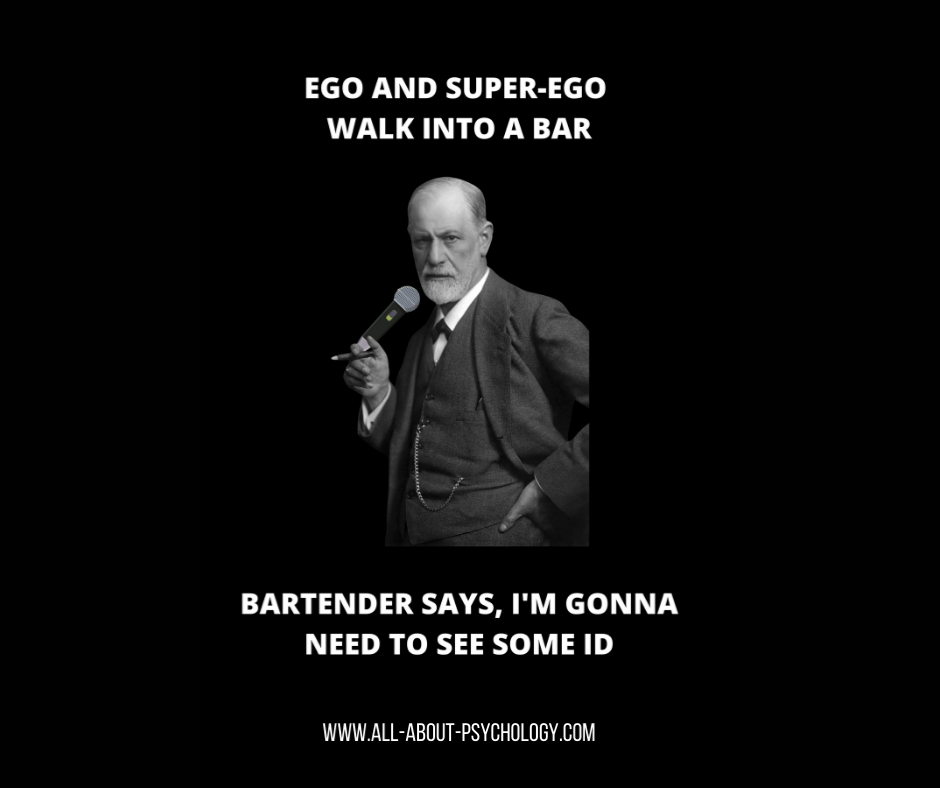 Welcome to the Sigmund Freud section of the All About Psychology website. From here you will be able to access detailed information and resources relating to the man who is widely considered as one of the most influential and controversial minds of the 20th century.


Get To Know Sigmund Freud 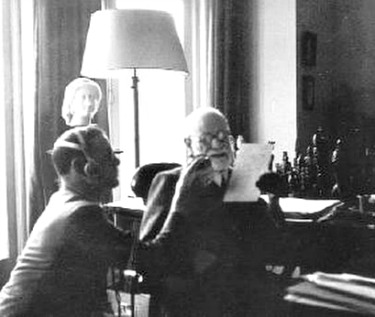 CLICK HERE to listen to a brilliant BBC World Service radio broadcast profiling the life and work of Sigmund Freud. The broadcast includes the only recording of Freud's voice in the BBC archives in which Freud outlines 'the authorized version' of his career.

Sigmund Freud began his journey to the Salpêtrière in Paris to study under the pioneering neurologist Jean-Martin Charcot. Such was Charcot's influence on Freud he wrote 'I sometimes come out of his lectures...with an entirely new idea of perfection;...no other human being has ever affected me in this way.'

Sigmund Freud opened his private medical practice in Vienna marking the beginning of his career as a specialist in nervous illnesses.

Sigmund Freud began treating one of his most famous patients 'Emmy von N,' later identified as Fanny Moser, an extremely wealthy Swiss philanthropist and patron of the arts. The case of Emmy von N not only greatly influenced Freud's thinking and writing on 'hysteria,' but it was also the first time he had treated a patient 'to a large extent' using the cathartic method. 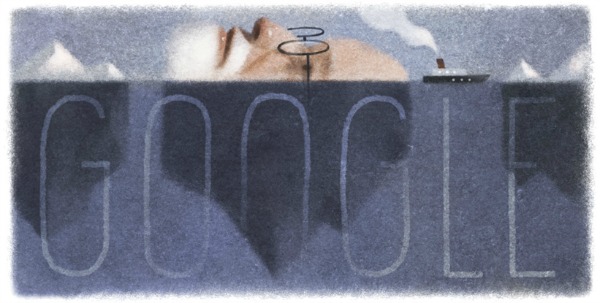 In a letter to his mentor Josef Breuer, Sigmund Freud makes his first documented reference to das unbewusste 'the unconscious.'

The legendary correspondence between Sigmund Freud and Carl Jung begins with a short letter from Freud which read:

Many thanks for sending me your Diagnostic Association Studies, which in my impatience I had already acquired. Of course your latest paper 'Psychoanalysis and Association Experiments' pleased me most, because in it you argue on the strength of your own experience that everything I have said about the hitherto unexplored fields of our discipline is true. I am confident that you will often be in a position to back me up, but I shall also gladly accept correction.

Sigmund Freud and Carl Jung meet face to face for the first time. They talk for 13 hours without interruption. The meeting took place at Freud's apartment (Berggasse 19), located in the Alsergrund district of Vienna.

Under the heading 'The Origin and Development of Psychoanalysis' Sigmund Freud delivered the first of five lectures at Clark University, an event he described as 'the first official recognition of our work.' Freud began his landmark lecture with the words 'Ladies and Gentlemen: It is a new and somewhat embarrassing experience for me to appear as lecturer before students of the New World. I assume that I owe this honor to the association of my name with the theme of psychoanalysis, and consequently it is of psychoanalysis that I shall aim to speak.' 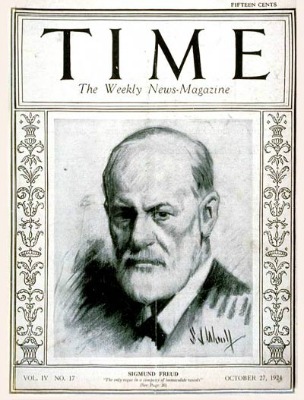 Sigmund Freud appeared on the cover of Time magazine for the first time. The accompanying article inside the magazine begins by informing the reader that two new translations of Sigmund Freud's work could now be found on U. S. bookstalls; these being 'Beyond the Pleasure Principle' and 'Group Psychology and the Analysis of the Ego,' and could be purchased for $1.50 and $2.00 respectively.

The first volume of Ernest Jones's 'The Life and Work of Sigmund Freud' was published. Subtitled 'The Formative Years and the Great Discoveries, 1856-1900,' part 1 of this classic three volume biography drew upon over 2000 letters, many of which Freud wrote to his future wife Martha Bernays during their 4 year engagement.

Jones's notes in the preface that 'The task of compiling a biography of Freud's life is a dauntingly stupendous one.... The reasons why I nevertheless yielded to the suggestion that I should undertake it were the considerations pressed on me that I was the only survivor of a small circle of co-workers (the 'Committee') in constant intimate contact with Freud, that I had been a close friend for 40 years and also during that period had played a central part in what has been called the "psychoanalytical movement.'


The Legacy of Sigmund Freud

CLICK HERE to listen to an excellent BBC World Service radio broadcast exploring how and why the 20th Century was so heavily influenced by the work of Sigmund Freud.


The Legend Lives On! 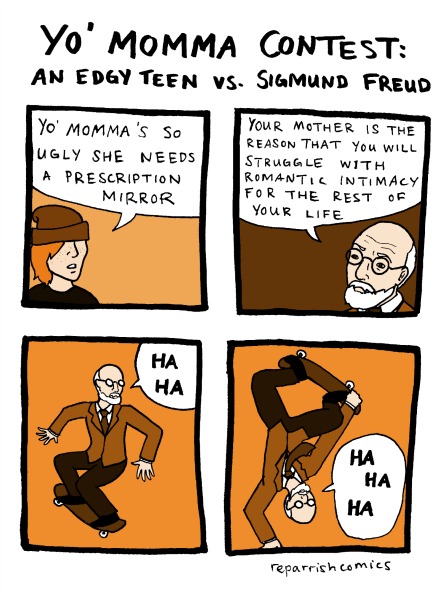 (One of the best Freud cartoons ever by R.E. Parrish)

Among many other things, the Freud Museum website has a comprehensive education section where you can learn out all about: Psychoanalysis, Freud and religion, Freud and war neuroses, interpretation of Dreams and Anna Freud.

Through its work – and the work of its individual members – the British Psychoanalytical Society has made an unrivaled contribution to the understanding and treatment of mental illness. Members of the Society have included Michael Balint, Wilfred Bion, John Bowlby, Anna Freud, Melanie Klein, Joseph Sandler, and Donald Winnicott. 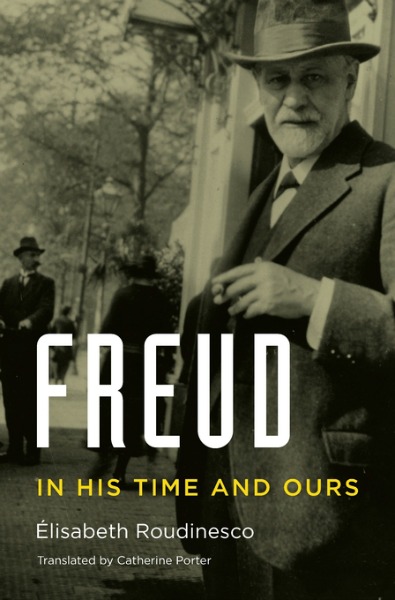 Élisabeth Roudinesco offers a bold and modern reinterpretation of the iconic founder of psychoanalysis. Based on new archival sources, this is Freud’s biography for the twenty-first century - a critical appraisal, at once sympathetic and impartial, of a genius greatly admired and yet greatly misunderstood in his own time and in ours.

Roudinesco traces Freud’s life from his upbringing as the eldest of eight siblings in a prosperous Jewish-Austrian household to his final days in London, a refugee of the Nazis’ annexation of his homeland. She recreates the milieu of fin de siècle Vienna in the waning days of the Habsburg Empire - an era of extraordinary artistic innovation, given luster by such luminaries as Gustav Klimt, Stefan Zweig, and Gustav Mahler. In the midst of it all, at the modest residence of Berggasse 19, Freud pursued his clinical investigation of nervous disorders, blazing a path into the unplumbed recesses of human consciousness and desire.

Yet this revolutionary who was overthrowing cherished notions of human rationality and sexuality was, in his politics and personal habits, in many ways conservative, Roudinesco shows. In his chauvinistic attitudes toward women, and in his stubborn refusal to acknowledge the growing threat of Hitler until it was nearly too late, even the analytically-minded Freud had his blind spots. Alert to his intellectual complexity - the numerous tensions in his character and thought that remained unresolved - Roudinesco ultimately views Freud less as a scientific thinker than as the master interpreter of civilization and culture.

Freud: In His Time and Ours

This super stylish Id Ego and Superego T-Shirt - available from Amazon (prime eligible) in a range of colors for women and men - is perfect for anyone with an interest in psychoanalysis, psychoanalytic theory and Sigmund Freud's structural model of the psyche. Also ideal for psych majors, psychology teachers and psychoanalysts who appreciate the complex interaction between instinctual desire and moral behavior. Sales help support All-About-Psychology.Com which has been providing free and comprehensive information and resources for psychology students and educators since 2008. 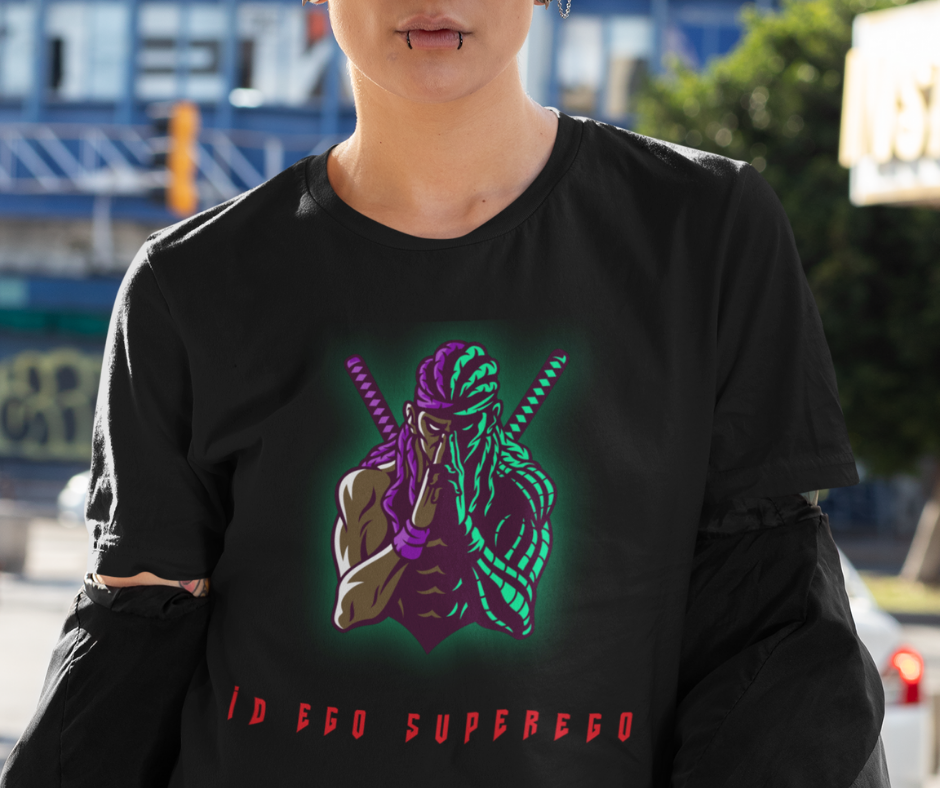