Superstition in The Pigeon 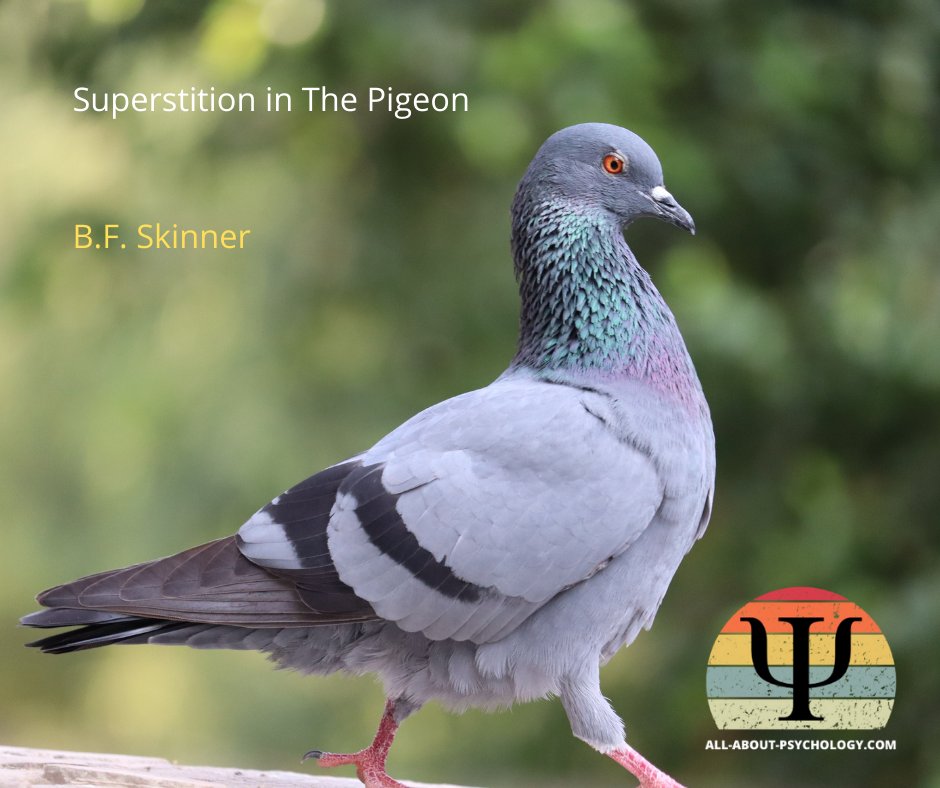 This learning theory classic by B.F. Skinner demonstrates how accidental connections between a ritual and favorable consequences can establish and maintain superstitious behavior.

To say that a reinforcement is contingent upon a response may mean nothing more than that it follows the response. It may follow because of some mechanical connection or because of the mediation of another organism; but conditioning takes place presumably because of the temporal relation only, expressed in terms of the order and proximity of response and reinforcement. Whenever we present a state of affairs which is known to be reinforcing at a given drive, we must suppose that conditioning takes place, even though we have paid no attention to the behavior of the organism in making the presentation. A simple experiment demonstrates this to be the case.

A pigeon is brought to a stable state of hunger by reducing it to 75 percent of its weight when well fed. It is put into an experimental cage for a few minutes each day. A food hopper attached to the cage may be swung into place so that the pigeon can eat from it. A solenoid and a timing relay hold the hopper in place for five sec. at each reinforcement.

If a clock is now arranged to present the food hopper at regular intervals with no reference whatsoever to the bird's behavior, operant conditioning usually takes place. In six out of eight cases the resulting responses were so clearly defined that two observers could agree perfectly in counting instances. One bird was conditioned to turn counter-clockwise about the cage, making two or three turns between reinforcements. Another repeatedly thrust its head into one of the upper corners of the cage. A third developed a 'tossing' response, as if placing its head beneath an invisible bar and lifting it repeatedly. Two birds developed a pendulum motion of the head and body, in which the head was extended forward and swung from right to left with a sharp movement followed by a somewhat slower return. The body generally followed the movement and a few steps might be taken when it was extensive. Another bird was conditioned to make incomplete pecking or brushing movements directed toward but not touching the floor. None of these responses appeared in any noticeable strength during adaptation to the cage or until the food hopper was periodically presented. In the remaining two cases, conditioned responses were not clearly marked.

The conditioning process is usually obvious. The bird happens to be executing some response as the hopper appears; as a result it tends to repeat this response. If the interval before the next presentation is not so great that extinction takes place, a second 'contingency' is probable. This strengthens the response still further and subsequent reinforcement becomes more probable. It is true that some responses go unreinforced and some reinforcements appear when the response has not just been made, but the net result is the development of a considerable state of strength.

With the exception of the counter-clockwise turn, each response was almost always repeated in the same part of the cage, and it generally involved an orientation toward some feature of the cage. The effect of the reinforcement was to condition the bird to respond to some aspect of the environment rather than merely to execute a series of movements. All responses came to be repeated rapidly between reinforcements - typically five or six times in 15 sec.

The effect appears to depend upon the rate of reinforcement. In general, we should expect that the shorter the intervening interval, the speedier and more marked the conditioning. One reason is that the pigeon's behavior becomes more diverse as time passes after reinforcement. A hundred photographs, each taken two sec. after withdrawal of the hopper, would show fairly uniform behavior. The bird would be in the same part of the cage, near the hopper, and probably oriented toward the wall where the hopper has disappeared or turning to one side or the other. A hundred photographs taken after 10 sec., on the other hand, would find the bird in various parts of the cage responding to many different aspects of the environment. The sooner a second reinforcement appears, therefore, the more likely it is that the second reinforced response will be similar to the first, and also that they will both have one of a few standard forms. In the limiting case of a very brief interval the behavior to be expected would be holding the head toward the opening through which the magazine has disappeared.

Another reason for the greater effectiveness of short intervals is that the longer the interval, the greater the number of intervening responses emitted without reinforcement. The resulting extinction cancels the effect of an occasional reinforcement.

According to this interpretation the effective interval will depend upon the rate of conditioning and the rate of extinction, and will therefore vary with the drive and also presumably between species. Fifteen sec. is a very effective interval at the drive level indicated above. One min. is much less so. When a response has once been set up, however, the interval can be lengthened. In one case it was extended to two min., and a high rate of responding was maintained with no sign of weakening. In another case, many hours of responding were observed with an interval of one min. between reinforcements.

In the latter case, the response showed a noticeable drift in topography. It began as a sharp movement of the head from the middle position to the left. This movement became more energetic, and eventually the whole body of the bird turned in the same direction, and a step or two would be taken. After many hours, the stepping response became the predominant feature. The bird made a well defined hopping step from the right to the left foot, meanwhile turning its head and body to the left as before.

When the stepping response became strong, it was possible to obtain a mechanical record by putting the bird on a large tambour directly connected with a small tambour which made a delicate electric contact each time stepping took place. By watching the bird and listening to the sound of the recorder it was possible to confirm the fact that a fairly authentic record was being made. It was possible for the bird to hear the recorder at each step, but this was, of course, in no way correlated with feeding. The record obtained when the magazine was presented once every min. resembles in every respect the characteristic curve for the pigeon under periodic reinforcement of a standard selected response. A well marked temporal discrimination develops. The bird does not respond immediately after eating, but when 10 or 15 or even 20 sec. have elapsed it begins to respond rapidly and continues until the reinforcement is received. 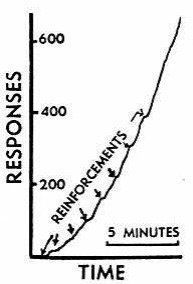 Fig. 1. 'Reconditioning' of a superstitious response after extinction. The response of hopping from right to left had been thoroughly extinguished just before the record was taken. The arrows indicate the automatic presentation of food at one-min. intervals without reference to the pigeon's behavior.

In this case it was possible to record the 'extinction' of the response when the clock was turned off and the magazine was no longer presented at any time. The bird continued to respond with its characteristic side to side hop. More than l0,000 responses were recorded before 'extinction' had reached the point at which few if any responses were made during a 10 or 15 min interval. When the clock was again started, the periodic presentation of the magazine (still without any connection whatsoever with the bird's behavior) brought out a typical curve for reconditioning after periodic reinforcement, shown in Fig. 1. The record had been essentially horizontal for 20 min. prior to the beginning of this curve. The first reinforcement had some slight effect and the second a greater effect. There is a smooth positive acceleration in rate as the bird returns to the rate of responding which prevailed when it was reinforced every min.

When the response was again extinguished and the periodic presentation of food then resumed, a different response was picked up. This consisted of a progressive walking response in which the bird moved about the cage. The response of hopping from side to side never reappeared and could not, of course, be obtained deliberately without making the reinforcement contingent upon the behavior.

The experiment might be said to demonstrate a sort of superstition. The bird behaves as if there were a causal relation between its behavior and the presentation of food, although such a relation is lacking. There are many analogies in human behavior. Rituals for changing one's luck at cards are good examples. A few accidental connections between a ritual and favorable consequences suffice to set up and maintain the behavior in spite of many unreinforced instances. The bowler who has released a ball down the alley but continues to behave as if he were controlling it by twisting and turning his arm and shoulder is another case in point. These behaviors have, of course, no real effect upon one's luck or upon a ball half way down an alley, just as in the present case the food would appear as often if the pigeon did nothing -- or, more strictly speaking, did something else.

It is perhaps not quite correct to say that conditioned behavior has been set up without any previously determined contingency whatsoever. We have appealed to a uniform sequence of responses in the behavior of the pigeon to obtain an over-all net contingency. When we arrange a clock to present food every 15 sec., we are in effect basing our reinforcement upon a limited set of responses which frequently occur 15 sec. after reinforcement. When a response has been strengthened (and this may result from one reinforcement), the setting of the clock implies an even more restricted contingency. Something of the same sort is true of the bowler. It is not quite correct to say that there is no connection between his twisting and turning and the course taken by the ball at the far end of the alley. The connection was established before the ball left the bowler's hand, but since both the path of the ball and the behavior of the bowler are determined, some relation survives. The subsequent behavior of the bowler may have no effect upon the ball, but the behavior of the ball has an effect upon the bowler. The contingency, though not perfect, is enough to maintain the behavior in strength. The particular form of the behavior adopted by the bowler is due to induction from responses in which there is actual contact with the ball. It is clearly a movement appropriate to changing the ball's direction. But this does not invalidate the comparison, since we are not concerned with what response is selected but with why it persists in strength. In rituals for changing luck the inductive strengthening of a particular form of behavior is generally absent. The behavior of the pigeon in this experiment is of the latter sort, as the variety of responses obtained from different pigeons indicates. Whether there is any unconditioned behavior in the pigeon appropriate to a given effect upon the environment is under investigation.