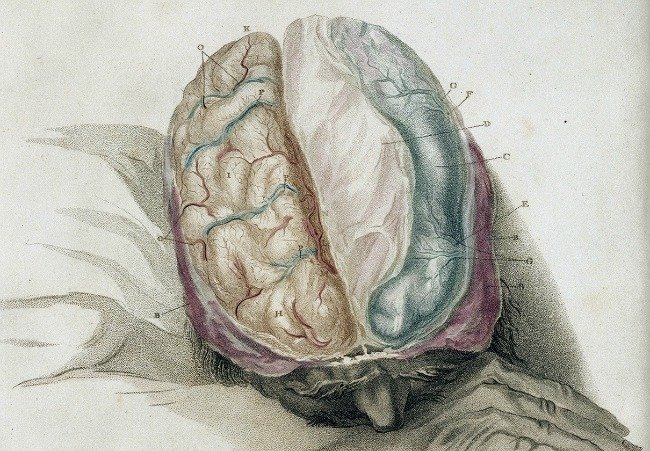 Charles Bell The Anatomy of the Brain. Courtesy Wellcome Images


The brain is perhaps the most complex machine in the Universe. It consists of two cerebral hemispheres, each with many different modules. Fortunately, all these separate parts are not autonomous agents. They are highly interconnected, all working in harmony to create one unique being: you.

But what would happen if we destroyed this harmony? What if some modules start operating independently from the rest? Interestingly, this is not just a thought experiment; for some people, it is reality.

In so-called ‘split-brain’ patients, the corpus callosum – the highway for communication between the left and the right cerebral hemispheres – is surgically severed to halt otherwise intractable epilepsy.

The operation is effective in stopping epilepsy; if a neural firestorm starts in one hemisphere, the isolation ensures that it does not spread to the other half. But without the corpus callosum the hemispheres have virtually no means of exchanging information.

What, then, happens to the person? If the parts are no longer synchronised, does the brain still produce one person? The neuroscientists Roger Sperry and Michael Gazzaniga set out to investigate this issue in the 1960s and ’70s, and found astonishing data suggesting that when you split the brain, you split the person as well. Sperry won the Nobel prize in medicine for his split-brain work in 1981.

How did the researchers prove that splitting the brain produces two persons, one per hemisphere? Through a clever set-up controlling the flow of visual information to the brain.

What was going on here? The left hemisphere could not see the left visual field, so when a stimulus appeared there, it rightfully responded that it saw nothing. Yet, the right hemisphere did see the stimulus, and indicated this the only way it could, by directing the left hand. The conclusion, drawn by Sperry and Gazzaniga, was clear: a single split-brain patient should actually be thought of as two half-brain patients – a Siamese twin of sorts. Sperry argued that this went beyond mere curiosity – it literally proved the concept of materialism in the area of consciousness. If you split the person when you split the brain, that leaves little room for an immaterial soul.

Case closed? Not to me. We’ve got to admit that split-brain patients feel and behave normally. If a split-brain patient walks into the room, you would not notice anything unusual. And they themselves claim to be completely unchanged, other than being rid of terrible epileptic seizures. If the person was really split, this wouldn’t be true.

To try to get to the bottom of things, my team at the University of Amsterdam re-visited this fundamental issue by testing two split-brain patients, evaluating whether they could respond accurately to objects in the left visual field (perceived by the right brain) while also responding verbally or with the right hand (controlled by the left brain). Astonishingly, in these two patients, we found something completely different than Sperry and Gazzaniga before us. Both patients showed full awareness of presence and location of stimuli throughout the entire visual field – right and left, both. When stimuli appeared in the left visual field, they virtually never said (or indicated with the right hand) that they saw nothing. Rather, they would accurately indicate that something had appeared, and where.

Based on these findings, we have proposed a new model of the split-brain syndrome. When you split the brain, you still end up with only one person. However, this person experiences two streams of visual information, one for each visual field. And that person is unable to integrate the two streams. It is as if he watches an out-of-sync movie, but not with the audio and video out of sync. Rather, the two unsynced streams are both video.

And there’s more. While the previous model provided strong evidence for materialism (split the brain, split the person), the current understanding seems to only deepen the mystery of consciousness. You split the brain into two halves, and yet you still have only one person. How does a brain, consisting of many modules, create just one person? And, how do split-brainers operate as one when these parts are not even talking to each other?