Chances are you’ve heard of Stanley Milgram’s obedience experiments. In 1961, Milgram recruited pairs of volunteers to take part in a “memory test”. One volunteer was given the job of teacher, the other, learner.


Each time the learner gave a wrong answer on a memory test the teacher was instructed to give the learner an electric shock and to increase the voltage with every error. What the teacher didn’t learn until later was that the learner and experimenter were actors and the machine was a prop.

In his first publication about the research, Milgram reported that a clear majority of participants inflicted what they were led to believe were painful if not lethal electric shocks to the learner. Most of us, he concluded, can be induced to torture someone else at the behest of an authority figure.


Milgram’s work appeared to say something profound about human nature. But there is no general agreement among psychologists about the meaning or implications of the research.

Did it, as Milgram argued, illuminate the Holocaust, whose executioners claimed they were merely following orders?


Did it reveal the capacity for evil lurking in our hearts?


Or did it simply demonstrate Milgram’s own blind-spots?


We decided to take a closer look at the statistical claims of Milgram’s research by revisiting his papers and data related to the obedience experiments in the archives at Yale University.


Milgram’s headline-grabbing conclusion that 62.5% of people obeyed instructions appeared to show most of us can be led to kill at an authority’s bidding. But this statistic came from his second, and most widely reported experiment, which involved just 40 people.


In fact, Milgram conducted 23 different kinds of experiments, each with a different scenario, script and actors. This patchwork of experimental conditions, each conducted with a sample of only 20 or 40 participants, yielded rates of obedience that varied from 0% to 92.5%, with an average of 43%. Contrary to received opinion, a majority of Milgram’s participants disobeyed.


In some conditions, the experimenter told the teacher to stop instead of continue. Others had two experimenters give conflicting orders. There were conditions with female teachers, or groups of teachers (using confederates again) who pressured the participant to obey or disobey.


In some conditions, the learner drew attention to a heart condition, in another he made no verbal responses at all, and in another he only agreed to take part if he could pull out when he wanted.


In several conditions the experimenter was physically distant from the teacher. In others the teacher was seated next to the learner in the same room. In one little-known condition, the learner was a friend or relative of the teacher.


Finally, Milgram varied the setting in which the experiment took place. One condition took place in industrial town of Bridgeport, far from the ivied halls of Yale, the study’s home base.

Making systematic sense of those variations did not interest Milgram himself, but we have published a first attempt today in the journal PLOS ONE. Using his original data and backed up by research at Yale University’s archives, we synthesised data from 21 of his experimental conditions, involving 740 participants in all.


We classified the 21 conditions in terms of differing roles of the experimenter, teacher, learner and the relationships between the three.


Setting aside the broader problems with the experiment’s internal validity, evidence of participant scepticism, and the lack of standardised procedures, we aimed to tease out which of the many features of his different variations accounted for whether or not teachers went to the maximum voltage on the shock machine.


According to our analysis, the most powerful factor was whether or not the experimenter directed the teacher to administer the constantly rising shock levels. In conditions where the teacher was free to choose the shock levels, very few proceeded to the maximum voltage.


By implication, obedience is strongest when authority figures give concrete directives, present a united front and maintain close contact their subordinates. It is also strongest when subordinates lack collective support for resistance.


Obedience – in the Milgram paradigm at least – is not only a matter of the subordinate’s relationship to the authority figure. This is where most Milgram scholarship focuses, but it is only part of the story. Social relationships with people other than an authority figure are a powerful influence.

Ironically, because they were isolated in an experimental laboratory, Milgram’s subjects lacked the advantage available to others in the world outside when they are being coerced and pressured to obey. In the face of bullying, the best strategy is to find allies, form alliances, and stick together.

Gina Perry is a psychologist and writer. Her feature articles, columns, and essays have been published in The Age and The Australian, and her short fiction has been published in a number of literary magazines, including Meanjin, Westerly, and Island.

Her co-production of the ABC Radio National documentary about the obedience experiments, 'Beyond the Shock Machine', won the Silver World Medal for a history documentary in the 2009 New York Festivals radio awards. She teaches in the Master of Publishing and Communications at the University of Melbourne. You can access the interview with Gina Perry via the following link.

Add a shocking psych classic to your wardrobe with this Milgram Experiment T-Shirt. Available from Amazon (prime eligible) in a range of colors for women and men. Sales help support this website, which has been providing free and comprehensive information and resources for psychology students and educators since 2008. 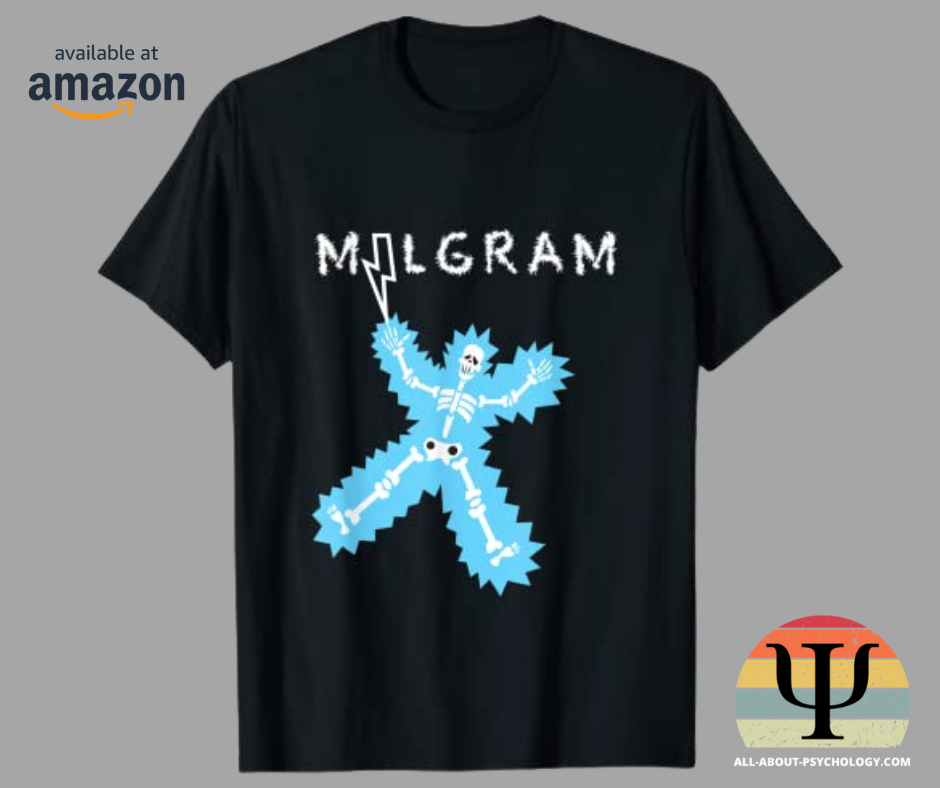