Picking Up the Pieces


When Everything Goes Wrong, How Do You Start Over? 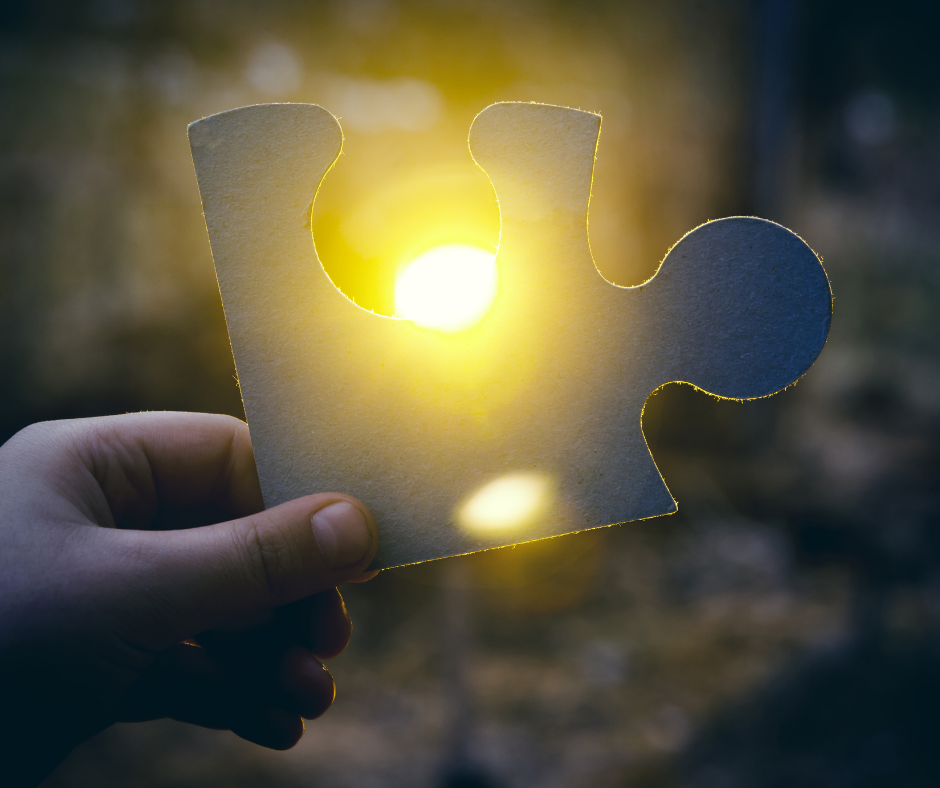 In his late 30s, Mr. Saddington described himself as a “Three-Dimensional Loser”: scammed out of his money; a broken marriage; thirty pounds heavier than he was the year before. “I’m a basket case,” he told me. “I even look like a basket.” Okay, maybe a basket with three-days’ growth.

But it wasn’t a joke. Mr. Saddington felt helpless and alone, so embarrassed by his plight that he dreaded seeing anyone he knew. He took down his Facebook page, and hid his profile on LinkedIn. He didn’t want to be found. Of course, he realized that getting in touch with people was crucial to recovery. But he just couldn’t face them. “I’m sure rumors are going around,” he said, “and I don’t want to get into explanations – when I talk about myself, I get depressed.” He cultivated self-pity. “I was so damn stupid,” he said. He developed a ghoulish interest in press coverage of the firm that had scammed him . . . before it crashed and burned in a spectacular display of financial fireworks.  “Maybe they’re teaching my case at Harvard Business School, Stupidity 101.”  He had an arsenal of snarky personal put-downs, and it was getting irksome. But I thought he couldn’t help himself. Perhaps, perversely, it was his only way left to feel clever.

As we talked, I learned that while still practicing law at a respected firm, he had invested in a client that the firm dropped when its securities fraud was finally uncovered. Mr. Saddington had suspected fraud before the firm acted, but thought he’d make a killing and get out before anything became public. So, he was “stupid.” The investors took his money and ran, leaving him to sputter that he’d been unduly careless. When the authorities came down on the investors, his firm cut him loose.

He wasn’t sure what he could do for a second act, and he’d moved into a studio in Astoria to save money.  “I don’t really need more space, since my wife left me.  She said that I ruined our life together.” I won’t get into whether that was appropriate behavior on her part, but suffice it to say that she had filed for divorce.  They had been living on the Upper East Side, and she thought that was a sort of human right – like free speech, or the right to practice your religion.  She’d told him that she couldn’t face her friends. She said that she hated him.  Fortunately, there were no children but, as a parting shot, she told him that he’d become so fat that she could never sleep with him anyway.

To say that he was humiliated was an understatement. He compensated with Doritos. And Entenmann’s cheese-filled crumb cake, a favorite since childhood. Comfort food. Buckets of KFC. Oreos (“Hey, Trump eats them by the fistful”). It was no surprise how fast he’d put on weight, since he rarely left the house (except to visit the supermarket). He’d stopped running. He had no room for his bike in the apartment, so he’d given it away. Mainly, he just sat and contemplated his navel, which was rapidly sinking into his swelling mountain of flesh. The ultimate humiliation was when he had to buy some pairs of Levi’s dad jeans, the ones that had an “ample” cut and elastic around the waist. 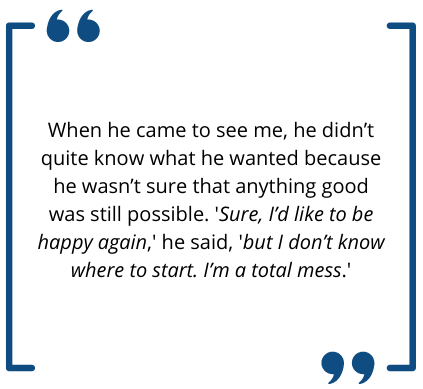 I thought that the easiest place to start was on his self-image – literally, with how he saw himself in the mirror.  His marriage was irretrievable, and it would be better to look for a new job without turning up in extra-wide jeans.  So how could he lose weight? He had been an athlete in college, and had joined a squash club when he moved to New York. He ran three times a week until he quit when he was fired. He was capable of hard physical activity. Or at least he had been – now he was so out of shape that I was afraid to recommend strenuous exercise. So, I suggested that he ease back into exercise while drastically reducing the calories. I sent him to a dietician for help.

The point is that he needed a goal, one of many that he’d need to work towards as he tried to achieve some degree of wellness. Moreover, he had to believe he had the wherewithal to reach this goal – that he had the will to work towards it. He had to believe in himself.  Did he?  I think he was sufficiently repelled by what he saw in the mirror that he was willing to try. “At this rate, I’ll have to get my jeans custom made.  Levi’s will run out of sizes.”  Also, he repeated his wife’s remark about not sleeping with him, and feared that women would never touch him again.

Of course, it’s unfortunate when incentives are negative (no off-the-rack jeans, no women will date him), but sometimes it’s unavoidable. The fact is that Mr. Saddington had let himself go, and it had happened so quickly that he hardly could have stopped himself. Now he had to start from the place he was at.

But the effort didn’t have to rest solely on his current, negative prospects. I suggested that he envision himself thirty pounds lighter, able to fit into his old wardrobe. I suggested that he envision walking into an interview looking good, and having dates again. For every incentive founded in regret and negativity, it was worth finding another that assumed a positive outcome. Every “I’ll probably never . . .” needs to be balanced against “What if I can . . .”  We don’t need to be pollyannaish to posit a reasonably possible outcome. The laws of chance are 50/50.

So, even though it was a financial stretch, Mr. Saddington joined a health club (“Hey, if money’s tight, so are my pants!”). But not without a struggle. Money was one thing but, more fundamentally, he was also angry at himself for squandering his savings on a scam. “Am I even worth rehabbing?” he asked. It’s common, when you blame yourself for your trouble, to propose your own punishment. But I told him that if he really thought the answer to his question was No, then he never would have shown up in my office (which seemed to satisfy him). It was clear that beating up on himself would compound his losses, while investing in himself could help. I say “could” because a week later, when we met again, he still hadn’t gone to the club. He was apparently still undecided about his own value. The only evidence that he was “worth rehabbing” was prospective, and in that sense intangible – he “could” be worth it, if he allowed himself to reach a place where he was worth it. The logic was kind of circular, but he had to buy into it.

But after several weeks, Mr. Saddington did start working out. He rediscovered personal discipline. He tossed the Oreos. The challenge now was to keep him from relapsing, which meant that it was important that he see results. I cautioned him not to expect too much all at once, and he appreciated that. “Don’t yell at the scale if you don’t lose weight right away. Give yourself time.”

The point was to understand the process. That is, although personal growth demands sacrifice, we can’t just demand an immediate payback. Both external and internal factors come into play. Internally, there are the psychological dynamics – e.g., Oedipal issues, sibling rivalries – that affect how we approach problems. Externally, there’s our real-world scaffolding – e.g., work, family commitments, money – on which we build our lives. All of these must be managed insofar as they provide pushback or sources of support.

A defining event of Mr. Saddington ’s life occurred when he was fifteen. His mother died of cancer and, in a sense, he never recovered from the loss. He spent his professional life wishing that, if he were ever in trouble, a loving parent would rescue him. It was no way to survive in a law firm, where everyone is responsible for their own work. Of course, his wish to be cared – or, rather, his fantasy – contributed to his letting himself to be scammed. But as he began to recognize his dependency as a professional impediment, he realized he’d have to get cracking on his own.  “At this point, nobody cares,” he sighed. It was a harsh assessment, and probably not true, but he needed to tell himself he could do this on his own. In time, he’d meet new people and develop a sense of community. Hopefully, he would have learned enough not to fall back into dependency. Our psychological infrastructure is never fully altered; ideally, we learn to master it.

Moreover, assuming that Mr. Saddington continues towards a semblance of wellness, he may emerge as not the same person he was before his troubles. Maybe he won’t go back to the law.  Maybe he’ll be less flamboyant, at least if he’s convinced that no one will catch him.  Wellness is not the same as recovery, i.e., it is not simply a return to the status quo ante. It can be that, but often it’s a type of self-reinvention, the creation of a more durable model for the self. It means that we’ve come out the other side; the “rehab” (to use Mr. Saddington’s term) was as painful as the condition from which we were rehabbed and, hence, it’s a source of lessons for the future.

So, what does Mr. Saddington’s journey towards wellness tell us? First, no collapse is so complete that we can’t begin to reverse it. But second, we can’t expect any efforts to reverse it to be easy, linear, or even likely to deliver the payback that we’d assumed that it would.  We just have to work at being better than when we started the process. We can’t let disappointment derail us. If we begin to like ourselves again, that’s progress. 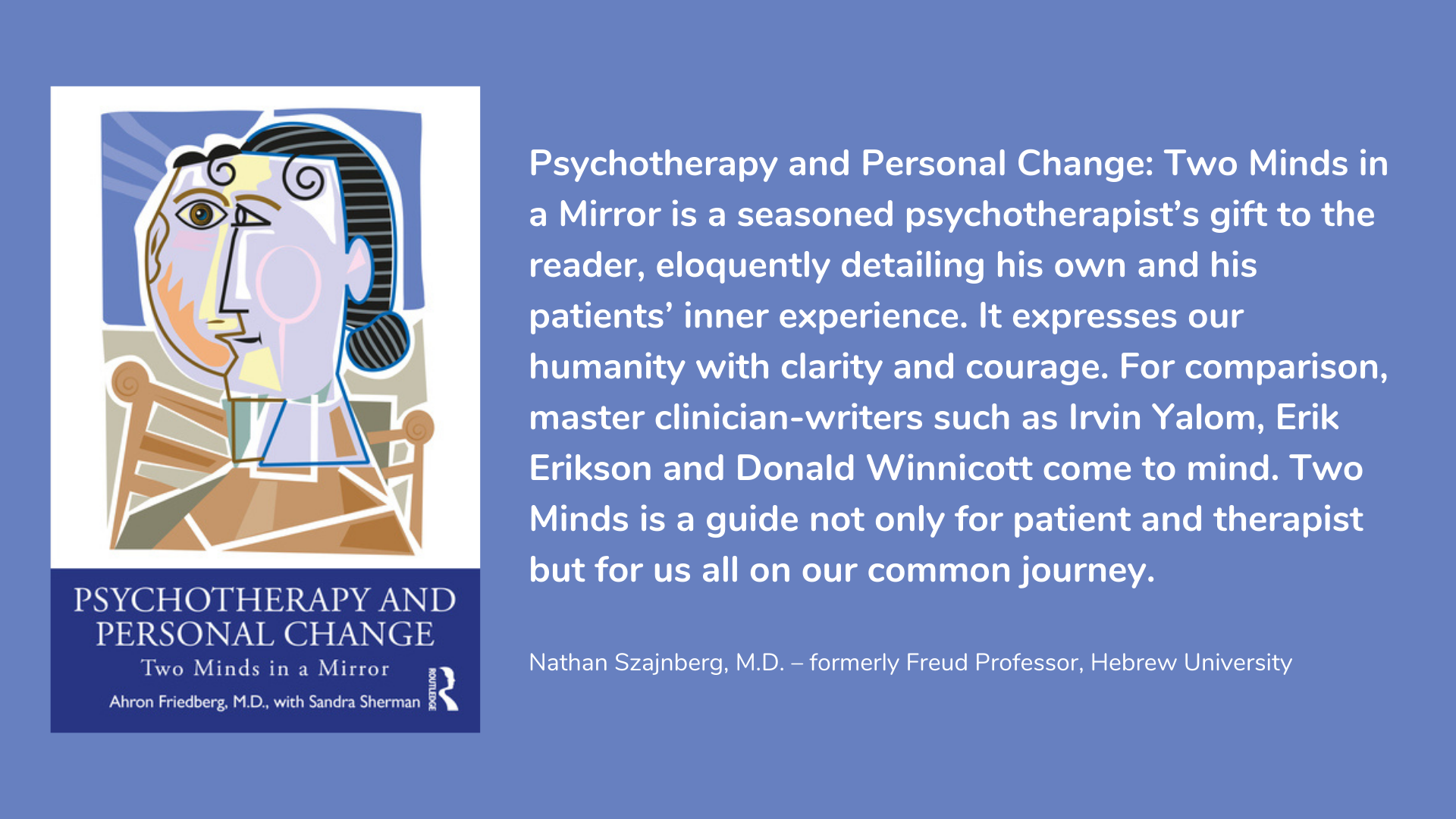