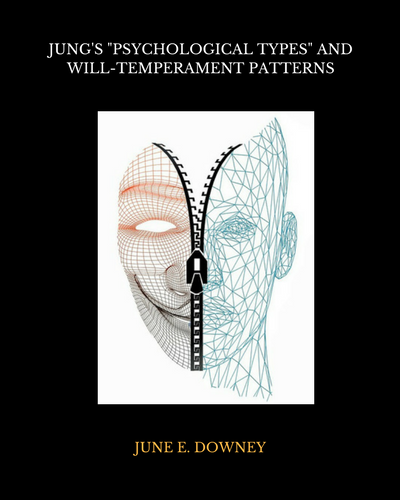 Jung's "Psychological Types" and Will-Temperament Patterns is an early article on extraversion and introversion, first published in the Journal of Abnormal Psychology in 1924.

In studying certain patterns of profile obtained from will temperament testing* I have frequently been impressed with. the possibility of describing the subjects giving them as introverted or extraverted. Other investigators have remarked the same possibility. It seems, therefore, worth while reviewing certain passages in Jung's "Psychological Types" in order to determine the extent to which such a parallelism holds. The approach in Jung is theoretical; that in will-temperament testing experimental; a comparison of conclusions would, therefore, be particularly instructive.

Extraversion, Jung defines "as an outward-turning of the libido. With this concept I denote a manifest relatedness of subject to object in the sense of a positive movement of subjective interest toward the object. Everyone in the state of extraversion thinks, feels, and acts in relation to the object, and moreover in a direct and clearly observable fashion, so that no doubt can exist about his positive dependence upon the object.

"Introversion means a turning inwards of the libido, whereby a negative relation of subject to object is expressed. Interest does not move toward the object, but recedes toward the subject. Everyone whose attitude is introverted thinks, feels, and acts in a way that dearly demonstrates that the subject is the chief factor of motivation while the object at most receives only a secondary value."

In other words in extraversion the movement of attention is toward the environment, social or physical; in introversion away from it.

I do not agree wholly with Conklin's interesting formulation of the difference between introverted and extraverted attitude in terms of the relative domination of attention by subjective or objective conditions. The attention of the extravert may be very largely determined by social meanings, social values, social principles, as an outcome of tradition, education, social pressure, all of which are subjective conditions of attention. The contrast, as I see it, is rather, a matter of orientation toward the world of ideas and of things leading in the case of the extravert to relatively immediate expression and in the case of the introvert to mental (imaginal) elaboration. Jung's types remind me of the older distinction between motor and sensory types.

Jung, it should be observed, makes much less of the existence of so-called types than one would think from reading his critics. He writes: "Introversion and extra version are not characters at all, but mechanisms, which can, as it were, be inserted or disconnected at will. Only from their habitual predominance do the corresponding characters develop. There is an undoubted predilection depending upon a certain inborn disposition, which however, is not always absolutely decisive for one or other mechanism."

Again, "Every human being possesses both mechanisms as an expression of his natural life-rhythm - A rhythmical alternation of both forms of psychic activity may correspond with the normal course of life - Outer circumstances and inner disposition frequently favor the one mechanism, and restrict or hinder the other; whereby a predominance of one mechanism naturally arises. If this disposition becomes in any way chronic, a type is produced, namely an habitual attitude, in which the one mechanism permanently dominates; not, of course, that the other can ever be completely suppressed, inasmuch as it also is an integral factor in psychic activity."

The closest point of contact between Jung's Types and willtemperament patterns is to be found in Jung's discussion of the type-problem in psychiatry where he devotes himself largely to an analysis of the types exploited by Otto Gross in his study of the secondary cerebral function.

Without going into the question of the value of the hypothesis of a secondary cerebral function it is at least evident that there emerges from Gross' discussion a clear-cut picture of contrasting behavior types as follows:

(1) Where there is rapid recovery of the primary function there is high "réagibilité," rapid adaptations, and changes in attitude. The psychological picture shows "a constant and rapidly renewed readiness for action and reaction, hence a kind of capacity for deviation, a tendency to superficiality of associative connections," etc. Quick inflammability and rapidly fading enthusiasms accompany rapid reactions. With a prompt grasp of the immediate present there occurs compliancy, a facile gliding over meanings, the appearance of presence of mind and audacity. Thinking tends "more towards a quick presentation and orderly arrangement of contents than towards abstraction and synthesis." In extreme cases we get "inferiority with shallow consciousness." The normal—and less extreme—individual is the typical extravert.

(2) When the secondary function is particularly intensive and prolonged, "The idea has an enduring effect; the impression goes deep. One disadvantage of this is a certain limitation within a narrow range, whereby thinking suffers both in variety and abundance." But "restriction to one thema undoubtedly effects an enrichment of the relevant associations and a firm cohesion and integration of the complex" - a type which Gross calls the sejunctive individual results from such an organization. There is inner seclusiveness. "An accumulation of stimuli becomes unbearable whence violent defense reactions appear." A chronic defense attitude may result. The individual belonging to this type is at a loss when presence of mind or promptness of reaction is required; there are faulty adaptations in social situations. In extreme cases we get "inferiority with contracted consciousness." The normal—and less extreme - individual is the typical introvert.

To repeat: the first type shows a shallow extensive consciousness ; the second type, a narrow intensive consciousness. The first type is a practical one because of quick adaptation to the environment and the wholesale taking over of ready-made ideals and ideas; the second is at a disadvantage in a novel situation, but reaches a more original and profound solution of problemsituations.

Gross' first type of individual corresponds very nicely to a characteristic reaction on the will-temperament test described as a rapid-fire or fluidic reaction-pattern. This reaction-pattern exhibits quick reactibility, little load, and much flexibility. Frequently, compliance is shown by a mild reaction to contradiction and considerable capacity for enthusiasm is suggested by the results from a motor impulsion test. There is little interest in detail and not much perseveration.

Gross' second type suggests a slow, deliberate reaction-pattern obtained in the will-temperament test. There is slow reaetibility, little flexibility, little compliance (strong reaction to contradiction) and persistent reaction to opposition. This type is unable to adjust quickly to a somewhat complex situation (coordination of impulses) but shows great interest in detail and long perseveration.

To be sure, clear-cut patterns of reaction on the will-temperament test are relatively infrequent. And, to repeat, pure extraverts and introverts are only limiting conceptions. " I have no desire," says Jung, "to give my readers the impression that such pure types exist at all frequently in actual practice. They are, as it were, only Galtonesque family-portraits, which sum up in a cumulative image the common and therefore typical characters, stressing these disproportionately, while the individual features are just as disproportionately effaced."

Let us next look a little more closely at certain traits of the will-profile and examine them with reference to the concepts of extraversion-introversion. Speed in movement and speed in decision appear to be symptoms of extraversion; slowness of movement and in decision symptoms of introversion. But slowness in decision is more characteristically an introvert trait than slow movement since decision is more relevatory of the subject than is movement, at least habitual movement; and caution, according to Jung, is the real reason for the introvert's apparent slowness rather than actual lack of speed.

Much inertia (or as Gross calls it, tension) characterizes the introvert and for the same reason as slowness of reaction. The extravert shows little load or tension. Flexibility is an extravert trait, lack of it an introvert one.

Speed of movement and decision, freedom from load, and flexibility constitute together a group of four will-temperament tests which when scored high suggest the typical extravert, just as failure to make average scores on them suggests the typical introvert. The four traits just listed make up the first group of tests of the will-profile. It is profitable to note in this connection that patients suffering from dementia precox - a typically introvert disorder - run excessively low on this group of traits. Frequently it is impossible to score them at all. My records for about twenty patients of this type suggest only one exception to this statement, - the patient was of the paranoid variety.

Reactions to the so-called tests for aggressiveness in the will-temperament series cannot be used to parallel introverted and extraverted traits in any clear-cut fashion. The four traits grouped together under this general rubric are motor impulsion, reaction to contradiction, resistance to opposition, and finality of judgment. The rapid-fire individual (extravert) under distraction yields to automatism and produces a large free handwriting; the inhibited individual (introvert) produces a small cramped handwriting. The first reacts tactfully to contradiction and the second cautiously or brusquely. The rapid-fire individual resists opposition quickly and more or less forcefully; the inhibited individual blocks at first, but as soon as he has sized up the experimental situation resists opposition strongly. The rapid-fire person may have little power of motor retardation so far as deliberate control is concerned but he may be able to slow down his movements by adopting a somewhat automatic mental set; the introvert may or may not possess power of motor retardation. So far as dementia precox patients are concerned they do not give on the aggressive traits a typical deliberate reaction. They react stubbornly to contradiction, with frequently an initial flare-up, but they do not resist opposition with any energy and they show no power of motor retardation.

Types are, as Jung insists, infrequent occurrences. I should prefer to think of them as descriptive tools, classificatory in function. They serve a purpose in helping us to think a world together and in pointing out fields for profitable exploration of causes. They need not block our appreciation of the infinite variety of individuals. 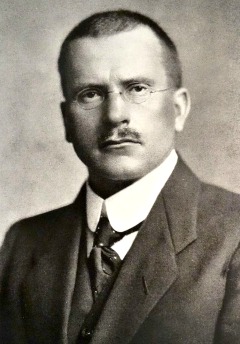 See following link to learn all about the life and work of Carl Jung and access free full-text articles by Jung e.g., The Association Method.

Please help support the website by visiting the All About Psychology Amazon Store to check out an awesome collection of psychology books, gifts and T-shirts.

Know someone who would be interested in reading Jung's "Psychological Types" and Will-Temperament Patterns?


Go From Jung's Psychological Types To The Home Page