The Wisdom of Crowds (Vox Populi) by Francis Galton 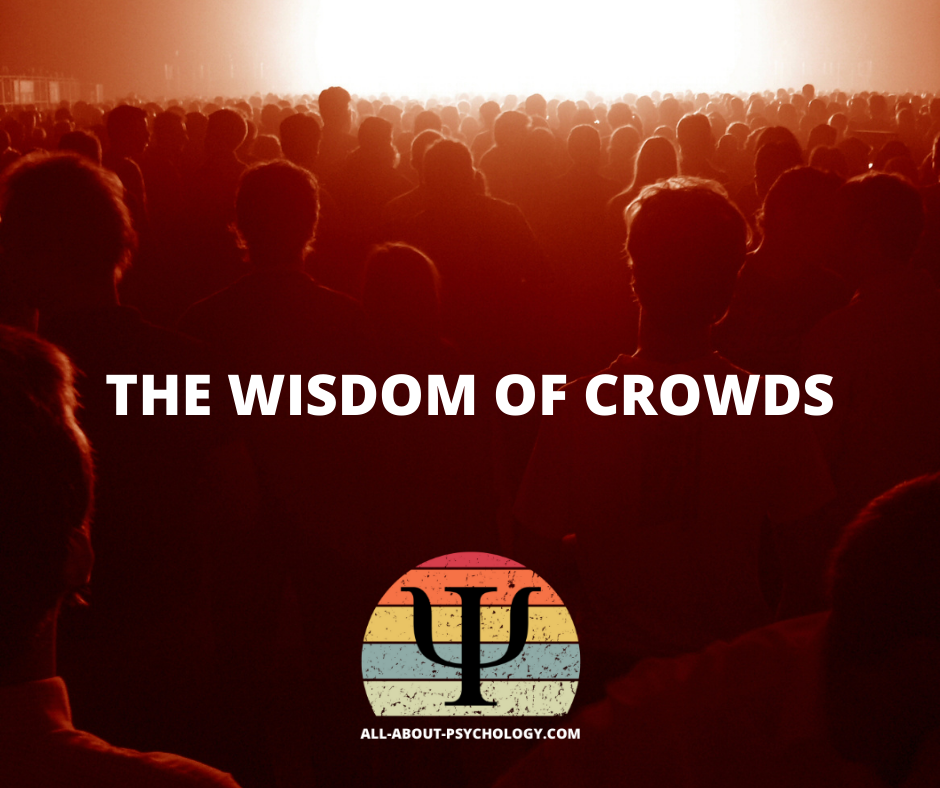 This particular addition to the psychology journal articles collection was inspired by the exploits of the internationally acclaimed psychological illusionist Derren Brown who "predicted" the outcome of Britain's National Lottery.


Derren Brown put forward the "The Wisdom of Crowds" as a possible explanation of how he was able to achieve this apparently incredible feat; and in doing so, he drew explicitly on Vox Populi by Francis Galton.

(The following information is taken from the official Derren Brown How To Win The Lottery website:)

Crowd behaviour is often associated with irrationality. Crowds form mobs and cults. They panic and the herd instinct is often wrong and easily swayed. At least that is the common perception. But scientist and polymath Francis Galton discovered that not all crowd behaviour was negative. Indeed he found that if you asked enough people the same question, they might come up with better answers than even the experts.

It was in 1906 that Galton made his discovery of what is known as the wisdom of crowds. He attended a farmers' fair in Plymouth where he was intrigued by a weight guessing contest. The goal was to guess the weight of an ox when it was butchered and dressed. Around 800 people entered the contest and wrote their guesses on tickets. The person who guessed closest to the butchered weight of the ox won a prize.

After the contest Galton took the tickets and ran a statistical analysis on them. He discovered that the average guess of all the entrants was remarkably close to the actual weight of the butchered ox. In fact it was under by only 1lb for an ox that weighed 1,198 lbs. This collective guess was not only better than the actual winner of the contest but also better than the guesses made by cattle experts at the fair. It seemed that democracy of thought could produce amazing results.

However, to benefit from the wisdom of crowds several conditions must be in place. First each individual member of the crowd must have their own independent source of information. Second they must make individual decisions and not be swayed by the decisions of those around them. And third, there must be a mechanism in place that can collate these diverse opinions.

Internet search engines are a good example of the wisdom of crowds in action. It is the reason the pages you search for come up near the top of the search engine list. In general terms the more people are linking to a page and the more popular it is the higher it comes. Another highly visible example of crowd decision making can be found in the television game show Who Wants To Be A Millionaire. When the player does not know which one of four answers is correct, they can ask the audience. Each member of the audience makes a separate and individual vote for the answer they favour. These votes are then collected and the results displayed. Often it is obvious from the result that one particular answer has found favour. And that is the one the player generally goes along with. In 95% of cases it is correct.

As much as I would like to think that Derren Brown had been able to predict the lottery by employing the wisdom of crowds, this explanation was in my humble opinion simply elegant misdirection. Nevertheless, Francis Galton's original article is an intriguing one and thanks to Derren Brown it can now be appreciated and considered once again.

In these democratic days, any investigation into the trustworthiness and peculiarities of popular judgments is of interest. The material about to be discussed refers to a small matter, but is much to the point.

A weight-judging competition was carried on at the annual show of the West of England Fat Stock and Poultry Exhibition recently held at Plymouth, A fat ox having been selected, competitors bought stamped and numbered cards, for 6d. each, on which to inscribe their respective names, addresses, and estimates of what the ox would weigh after it had been slaughtered and " dressed." Those who guessed most successfully received prizes. About 8oo tickets were issued, which were kindly lent me for examination after they had fulfilled their immediate purpose. These afforded excellent material.

The judgments were unbiased by passion and uninfluenced by oratory and the like. The sixpenny fee deterred practical joking, and the hope of a prize and the joy of competition prompted each competitor to do his best. The competitors included butchers and farmers, some of whom were highly expert in judging the weight of cattle; others were probably guided by such information as they might pick up, and by their own fancies.

The average competitor was probably as well fitted for making a just estimate of the dressed weight of the ox, as an average voter is of judging the merits of most political issues on which he votes, and the variety among the voters to judge justly was probably much the same in either case. After weeding thirteen cards out of the collection, as being defective or illegible, there remained 787 for discussion. I arrayed them in order of the magnitudes of the estimates, and converted the cwt., quarters, and lbs, in which they were made, into lbs., under which form they will be treated.

Distribution of the estimates of the dressed weight of a particular living ox, made by 787 different persons. 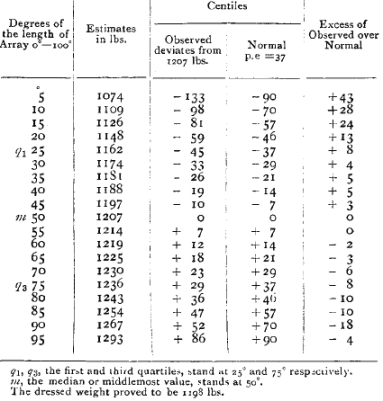 According to the democratic principle of "one vote one value," the middlemost estimate expresses the vox populi, every other estimate being condemned as too low or too high by a majority of the voters (for fuller explanation see " One Vote, One Value," NATURE, February 28, p. 414), Now the middlemost estimate is 1207 lb., and the weight of the dressed ox proved to be 1198 lb.; so the vox populi was in this case 9 lb., or 0.8 per cent of the whole weight too high. The distribution of the estimates about their middlemost value was of the usual type, so far that they clustered closely in its neighbourhood and became rapidly more sparse as the distance from it increased.

Diagram from the tabular values. 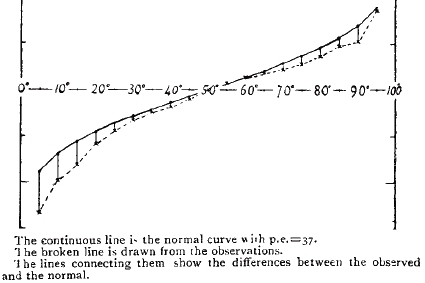 It would be an equal chance that the estimate written on any card picked at random out of the collection lay within or without those limits. In other words, the "probable error" of a single observation may be reckoned as 1/2 (45+29), or 37 lb. (3.1 per cent.). Taking this for the p.e. of the normal curve that is best adapted for comparison with the observed values, the results are obtained which appear in above table, and graphically in the diagram.

The abnormality of the distribution of the estimates now becomes manifest, and is of this kind. The competitors may be imagined to have erred normally in the first instance, and then to have magnified all errors that were negative and to have minified all those that were positive. The lower half of the "observed" curve agrees for a large part of its range with a normal curve having the p.e.=45, and the upper half with one having its p.e.=29. I have not sufficient knowledge of the mental methods followed by those who judge weights to offer a useful opinion as to the cause of this curious anomaly. It is partly a psychological question, in answering which the various psychophysical investigations of Fechner and others would have to be taken into account. Also the anomaly may be partly due to the use of a small variety of different methods, or formulae, so that the estimates are not homogeneous in that respect.

It appears then, in this particular instance, that the vox populi is correct to within 1 per cent of the real value, and that the individual estimates are abnormally distributed in such a way that it is an equal chance whether one of them, selected at random, falls within or without the limits of -3.7 per cent and +2.4 per cent of their middlemost value.

This result is, I think, more creditable to the trust-worthiness of a democratic judgment than might have been expected.

The authorities of the more important cattle shows might do service to statistics if they made a practice of preserving the sets of cards of this description, that they may obtain on future occasions, and loaned them under proper restrictions, as those have been, for statistical discussion. The fact of the cards being numbered makes it possible to ascertain whether any given set is complete.


Know Someone Who Would Like To Read This Article?