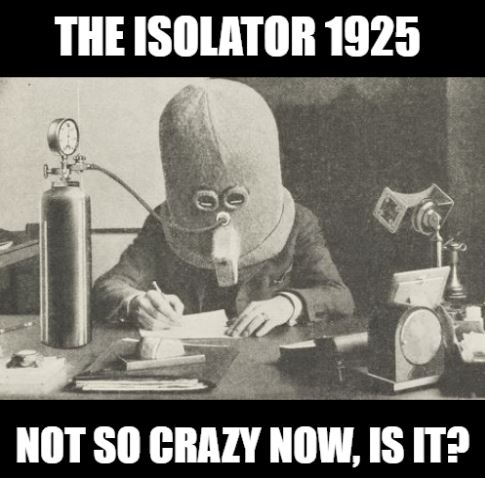 The following article, which was originally published in the popular technology magazine science and Invention in 1925, was inspired by US president Donald Trump stating that wearing a mask was not for him. This despite the fact that his own department of health - the CDC (Centers for Disease Control and Prevention) to be precise - recommends wearing cloth face coverings in public settings. Trump stated that:

I just don't want to wear one myself. It's a recommendation, they recommend it. I'm feeling good. I just don't want to be doing, I don't know somehow sitting in the Oval Office behind that beautiful resolute desk, the great resolute desk, I think wearing a face mask as I greet presidents, prime ministers, dictators, kings, queens, I don't know. It somehow...I don't see it for myself. I just I just maybe I'll change my mind, but this will pass. And hopefully it'll pass very quickly. Now with that being said, if somebody wants to...I mean most people could just make something out of a certain material. So it's very well designated. It's very simple to do. I won't be doing it personally. It's a recommendation, ok?

This got me thinking! If only there was something with more pizzazz than a common old face mask, that president Trump could wear while meeting the great and the good (and the odd dictator) from behind his beautiful resolute desk. And that's when I remembered reading about The Isolator. This brilliant invention, years ahead of its time, not only renders the wearer protection from both contracting and spreading coronavirus but its also perfect for anybody who wants to work at home without distraction. What's not to like?

The Isolator by Hugo Gernsback 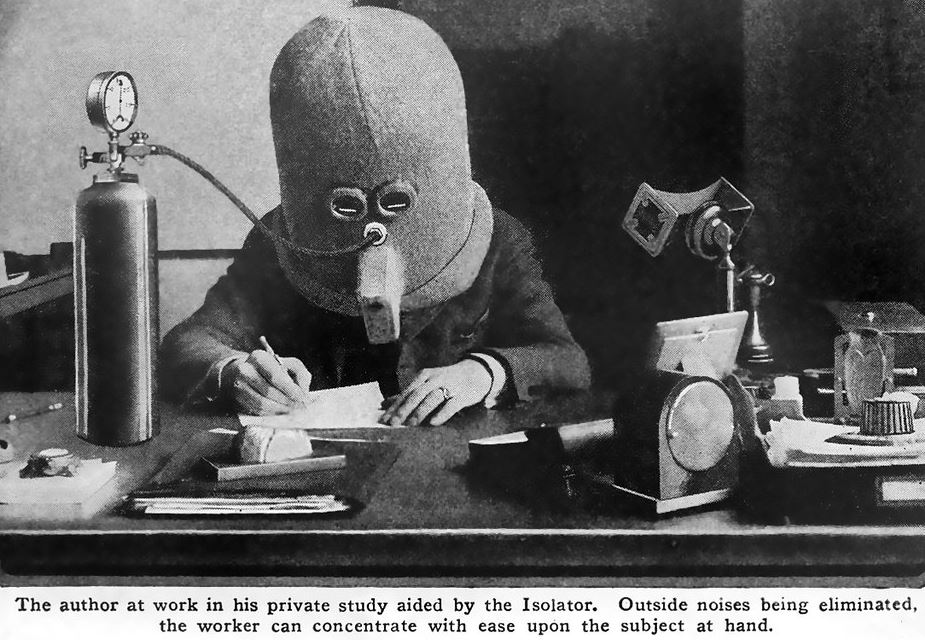 Perhaps the most difficult thing that a human being is called upon to face is long, concentrated thinking. Whether you are a lawyer, trying to formulate or memorize the pleading of a special case, whether you are an inventor with an intricate problem to be solved, whether you are a playwright trying to hatch out a knotty plot—assiduous concentration on the subject becomes necessary.

Most people who desire thus to concentrate find it necessary to shut themselves up in an almost soundproof room in order to go ahead with their work, but even here there are many things that distract their attention.

Suppose you are sitting in your study or your work room, ready for the task. Even if the window is shut, street noises filter through, and distract your attention. Some one slams a door in the house, and at once your trend of thought is disturbed.

A telephone bell or a door bell rings somewhere, which is sufficient, in nearly all cases, to stop the flow of thought.

But even if supreme quiet reigns, you are your own disturber practically fifty per cent. of the time. You will lean back in your chair and begin to study the pattern of the wallpaper, or you will see a fly crawl along the wall, or a window curtain will be moving back and forth, all of which is often sufficient to turn your mind away from the immediate task to be performed.

The writer repeats that the greatest difficulty that the human mind has to contend with is lack of concentration, mainly due to outside influences.

If, by one stroke, we can do away with these influences, we will not only be benefitted greatly thereby, but our work would be accomplished more quickly and the results would be vastly better.

The writer, who has to perform, almost daily, in connection with his editorial duties, many tasks that involve considerable concentration, has found out that it is almost impossible to keep his mind on a subject for five minutes without disturbance. For that reason, he constructed the helmet shown in the accompanying illustrations, the purpose of which is to do away with all possible interferences that prey on the mind. 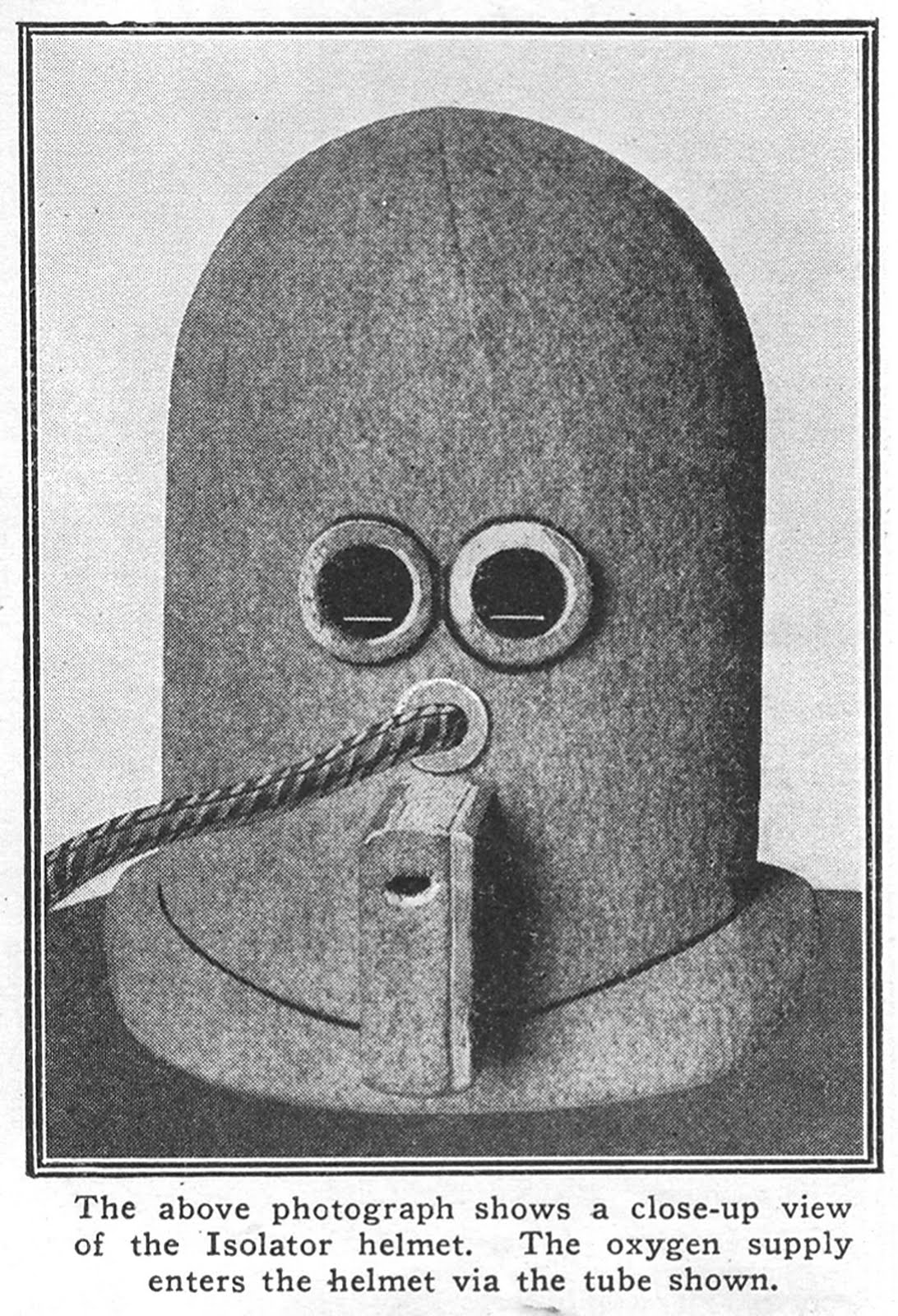 The problem was first to do away with the outside noise. The first helmet constructed as per illustration was made of wood, lined with cork inside and out, and finally covered with felt. There were three pieces of glass inserted for the eyes. In front of the mouth there is a baffle, which allows breathing but keeps out the sound. The first construction was fairly successful, and while it did not shut out all the noises, it reached an efficiency of about 75 per cent. The reason was that solid wood was used.

In a subsequent helmet under construction, an air space is included, as per our line illustration, no wood entering into the construction at all. This feature should give almost 90 per cent. to 95 per cent. efficiency, thereby excluding practically all sounds.

It will be noted that the glass windows directly in front of the eyes are black. The construction involved the use of ordinary window glass, the outer glass being painted entirely black. Two small white lines were scratched into the paint, as shown. The idea of this is as follows:

The writer thought that shutting out the noises was not sufficient. The eye would still wander around, thereby distracting attention. By having the two white lines scratched on the glass, the field through which the eye can move is comparatively small.

It was also found that if the helmet was used alone for more than fifteen minutes at a time, the wearer would become more or less drowsy. This is not conductive to hard thinking, and for that reason the writer introduced a small oxygen tank, attached to the helmet. This increases the respiration and livens the subject considerably.

With this arrangement it is found that an important task can be completed in short order and the construction of the Isolator will be found to be a great investment.


In that case Boris, I've got just the thing!

Know someone who'd love an isolator helmet? Share this article with them.