Teleological Behaviourism or
What it Means to Imagine a Lion 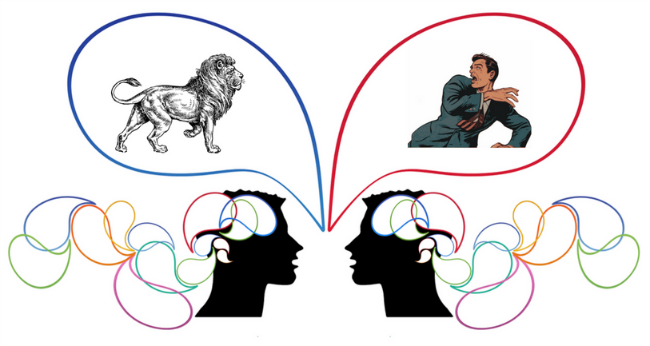 As it turns out, Jack and Jill will be able to communicate perfectly. Objects that Jill calls ‘red’, Jack will call ‘red’. What Jill calls ‘green’, Jack will call ‘green’. Neither will Jack have any trouble communicating with other people. Red will be a warm colour for Jack, associated with fire and the Sun; green will be a cool colour, associated with grass and trees. Jack will go on green traffic lights and stop at red. Neither Jack nor anyone else will realise that there is anything different about him. What counts for Jack is the relation between his behaviour and the environment.

As far as I am concerned, our minds are not mysterious entities in our brains but rather equivalent to the long-term patterns in our overt behaviour. This view stems from Aristotle’s philosophy of teleology, in which the end, not the means, is the most important part. For a psychologist, the viewpoint is known as teleological behaviourism, and that’s where I fall.

QUESTION: It is the far-distant future. Knowledge of the brain has progressed to the point where our brains can be removed from our bodies and stored safely in a room while communicating wirelessly with our bodies; such disembodied brains can control our movements as they do now in situ. American football teams use this brain-separation technique to protect themselves from concussions. Yet there are still broken arms and legs, and players writhing on the ground. Where is the pain?

ANSWER: The pain is in the players’ behaviour. The brains in the locker room contain the pain mechanisms, but pain itself is not an internal mechanism; it is an interaction over time between a person’s overt behaviour and the environment. It is the player writhing on the field, not his or her brain, that needs assistance; pain can function as a signal for that. For the hurt football player, as for us all, the pain of the moment exists in the context of a wider relationship over time between harmful stimuli (such as a hot stove) and overt and generally functional behaviour (such as pulling your hand away).

QUESTION: Again, it is the far-distant future. Suppose you lived then and married a wonderful person and had a great life together with perhaps children and grandchildren. After 50 years of marriage, on his/her deathbed, he/she tells you that he/she is a robot, manufactured rather than normally born. Would you be disappointed?

ANSWER: I would not be disappointed. If anything (say, a non-physical soul or some neural circuit in her brain) had been left out of my wife’s composition, that thing would have been entirely irrelevant to me. If her behaviour after all these years was that of a normal human being, her consciousness must have been that of a normal human being, by definition. Otherwise, consciousness would be a truly trivial thing. Consciousness evolved as did our less-extended behavioural patterns. The separation of consciousness from long-term behavioural patterns allows you to say that a normally behaving person, normal in every way (perhaps, over the long run, a better behaving person than you are), is ‘really’ inferior to you because his or her in-principle non-detectible consciousness is faulty or non-existent. Such a notion is not just wrong but destructive, and can underlie racism and prejudice of every kind.

QUESTION: Two people in a room are asked to imagine a lion. One closes her eyes and says: ‘Yes, now I see it; it’s walking around; I see the mane and the tail.’ The other person runs screaming from the room. Which one is imagining a lion?

ANSWER: Clearly the person running out of the room is imagining a lion. The other is imagining a movie of a lion. There are no sense organs in our brains; if there were, we would see nerves and not lions. To imagine something is to behave in the absence of that thing as you would normally do in its presence – as you would do if you perceived that thing. Thus, as Aristotle said, imagination depends on perception. Actors on the stage are performing acts of imagination. Good acting is not a consequence of good imagination but is itself good imagination.

Let me add a brief personal story that might show the reader how much of a behaviourist I have become. Recently, I was riding in a car with my wife and adult daughter. Out of the blue, my daughter asked: ‘Dad, how come you never say “I love you” to me?’

My wife responded: ‘He never says it to me either.’

I insisted that ‘I love you’ is a trite and overused, and therefore meaningless, phrase. I added that if they didn’t know I loved them from my behaviour, nothing I said would make them believe it.

I refused and added: ‘But I’ll tell you what I will do. I’ll say “You love me,” which is neither trite nor meaningless, but based on extensive behavioural observation.’ Then we exchanged ‘You love me’ all around.

We were in a much better place than if we had said ‘I love you’: we each had unmistakable evidence for what we said – that we were loved – and could be truly believed.

The fact that our consciousnesses lie in our interaction with the world over time doesn’t mean that we should change the way we speak in everyday life. After all, we speak of the Sun rising and falling, as if it goes around the Earth, yet we know that the reverse is the case.

Have your say about what you just read! Leave me a comment in the box below.
Back To The Top Of The Page