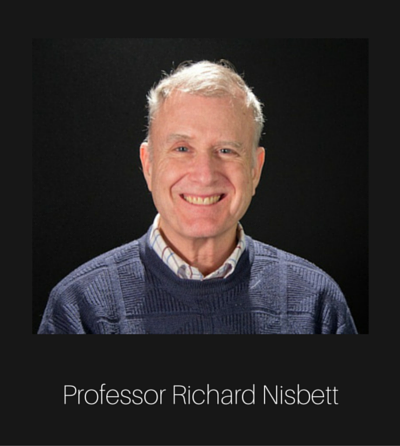 Richard Nisbett, Ph.D., is professor of psychology and Co-Director of the Culture and Cognition Program at the University of Michigan. A world renowned psychologist, Professor Nisbett's primary research interests include the study of reasoning and basic cognitive processes; most notably in relation to induction, statistical reasoning, causal attribution, cost-benefit analysis and logical vs. dialectical approaches to problem-solving.

Among his many professional accolades, Richard Nisbett received the American Psychological Association (APA) Award for Distinguished Scientific Contributions in 1991 and he was elected to the National Academy of Sciences in 2002.

What first sparked your interest in the study of human reasoning?

I've always been interested in how people think and I'm introspective to a fault. What got me started on a career studying the topic was the very first psychology experiment I did. I gave people a placebo and told some of them it would cause heart palpitations, rapid breathing, and sweaty palms. These are the symptoms people experience when they're undergoing strong emotion. I told control subjects they would have mild headache and itching sensations. I then gave subjects a series of steadily increasing electric shocks, with instructions to tell me when they could first feel the shock, when the shocks first became painful, and they were too painful to bear. I anticipated that subjects who were told the pill would cause arousal would mistakenly attribute the arousal being caused by the shock to the pill. They would consequently find the shop less aversive and would be willing to take more of it. And that was the finding. After removing the electrodes I asked the subjects in the arousal instruction condition who had taken a great deal of shock why they had taken so much. A typical answer would be, "Well I used to build radios and I got a lot of shocks so I guess I got used to it." I might then say, "Well I can see why that might be. Tell me, did you think about the pill at all while you were taking the shock?" "No." "Well I'm sure it wouldn't have been the first thing on your mind, but I wonder if it occurred to you that the pill was causing you to be physiologically aroused." "Nope, didn't think about the pills and didn't think about the arousal."

It was perfectly clear that subjects had no idea what had gone on in their heads. At the time, believe it or not, this seemed to most people to be a radical discovery. There was such a basic presumption that thought is basically linguistic. I began to do experiments where I would manipulate some aspect of the environment or tell people something which would affect their behavior in some way. For example I might have people examine an array of nightgowns and tell me which they preferred. The order of the nightgowns had a big impact on preference. Subjects had no idea this was true and when I asked them if the order of the nightgowns could have had an influence on their preference, they would look at me as if I were crazy. By now psychologists have hundreds and hundreds of experiments where we find people engaging in fairly complicated cognitive processes which they have no inkling about.

From studying errors and reasoning I went to studying how you can improve reasoning. To my great surprise, I found people can readily be trained on abstract rules like the law of large numbers or the principle of regression to the mean or the microeconomic concept of sunk costs. People's judgments and choices could easily be improved by very brief training. This discovery laid the basis for my book Mindware: Tools for Smart Thinking, which was just published.

What would you say underpins, more than anything else, the human propensity for flawed reasoning?

Our reasoning is as good as it needs to be for the life of a hunter-gatherer. The problem is that the world has gotten vastly more complex. In particular we get a huge amount of information that was obtained by others and presented to us in verbal form. Our attempts to understand this information require a huge range of critical skills that have to be obtained through education.

What is the 'fundamental attribution error'?

At base, the FAE involves neglecting contextual causes of behavior - both for objects and for people - in favor of an overemphasis on dispositional properties. Aristotle believed that objects fall because they have the property of gravity. He couldn't see that falling is the result of an interaction between the object and the environment. (The ancient Chinese, who are much more attentive to relationships, got it right about gravity.) We tend to see the behavior of people as being due to their personality traits, abilities, or preferences. We are capable of completely ignoring situational factors that are the real determinants of behavior. (And modern East Asians are much less likely to make this error than are Westerners.)

Richard Nisbett discussing why people are much more likely to explain someone's behavior in terms of dispositional personality rather than situational factors.

What can readers expect from your latest book 'Mindware: Tools for Smart Thinking'? 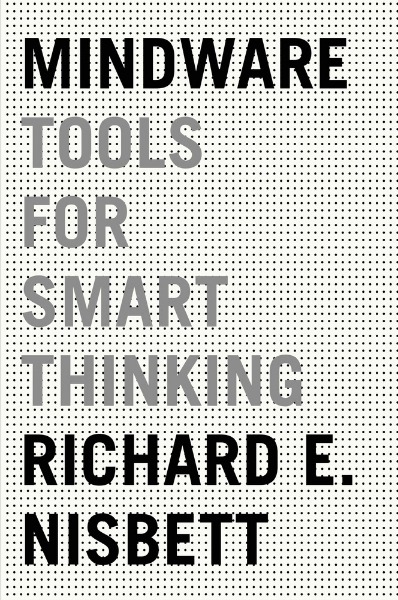 Many scientific and philosophical ideas are so powerful that they can be applied to our lives at home and work and school to help us think smarter and more effectively about our behaviour and the world around us. Surprisingly, many of these ideas remain unknown to most of us.

In Mindware, the world-renowned psychologist Richard Nisbett presents these ideas in clear and accessible detail, offering a tool kit for better thinking and wiser decisions. He has made a distinguished career of studying and teaching such powerful problem-solving concepts as the law of large numbers, statistical regression, cost-benefit analysis, sunk costs and opportunity costs, and causation and correlation, probing how best to teach others to use them effectively in their daily lives.

In this groundbreaking book, he shows that a course in a given field - statistics or economics, for example - often doesn't work as well as a few minutes of more practical instruction in analyzing everyday situations. Mindware shows how to reframe common problems in such a way that these powerful scientific and statistical concepts can be applied to them. The result is an enlightening and practical guide to the most powerful tools of reasoning ever developed - tools that can easily be used to make better professional, business and personal decisions.

What are the greatest misconceptions about intelligence?

The greatest misconception is that intelligence is basically just one thing and that that thing can be measured by an IQ test. Smarter people do indeed have higher IQs less smart people, but there is a very large range of attributes such as practical intelligence, creativity, curiosity, and "grit" that contribute to intelligent behavior that are not tapped by IQ tests. The kinds of reasoning principles found in Mindware will make you smarter, but they won't increase your score on an IQ test.

What is modifiability of intelligence?

The second greatest misconception about intelligence is that it is largely fixed by genes. The IQ of people in the richest countries has gone up by more than a standard deviation in the past 70 years. That's equal to the difference we would expect between someone who finishes high school or some community college vs someone we would expect to graduate from a good university. The IQ of a lower-class child adopted by a middle-class family is on average 15 points higher than if the child had been raised in the family of origin. And intelligence of the sort I discuss in my book goes up to a very significant degree in college.

What do you believe to be the single most effective way of nurturing a child's intelligence?

As an advocate of rigorous experimental research how concerned were you by the article in Science 'Estimating the Reproducibility of Psychological Science,' which suggested that many published psychology studies fail to replicate?

I was astonished by that report. I can't square it with the following considerations.

1) I have conducted hundreds of experiments and dozens of them have been replicated by other people. In my whole career I recall only three failures to replicate. One failure is probably real; two or three people couldn't get our finding and then we couldn't either. One failure almost surely was an accident or due to incompetence; the basic point being made by the experiment has been found in many similar though not identical setups. The third failure is quite interesting. A dozen experiments failed to get the Storms and Nisbett insomnia effect. In that experiment we found that if you tell insomniacs that you've given them a pill to take at bedtime that will cause physiological arousal, they get to sleep more quickly. Our theory was that the insomniac who believes his arousal is due to a pill finds the worries that normally keep him awake to be less upsetting than usual - because his arousal is explained by the pill rather the worries - and he therefore drifts readily off to sleep. After many years the mystery was solved: the effect depends on subjects having a high need for cognition. Our original study was done with Yale students; the attempted replications were conducted at less elite institutions. It's possible that some of the reproducibility failures have a similar origin: levels on some moderator variable differ across experiments; and findings of both original and replication attempt are real.

2) The most dire implications of the reproducibility failures are without doubt exaggerated. I have challenged a dozen social psychologists to name a failure to replicate a study that immediately upon publication is recognized as a highly interesting and important theoretical contribution. (Think Sherif, Asch,Festinger and Carlsmith, Aronson and Mills, Milgram, Darley and Latane, Lepper, Greene and Nisbett.) I have collected only three such examples. Moreover, I have looked at my textbook written with Gilovich,Keltner and Chen. I could find only very few examples of empirical or theoretical claims which are seriously contested. We are not misinforming the public about things that matter much.

Mostly I am helping people create critical thinking courses based on Mindware. It's been tremendous fun.


Go From Richard Nisbett Q & A Back To The Home Page