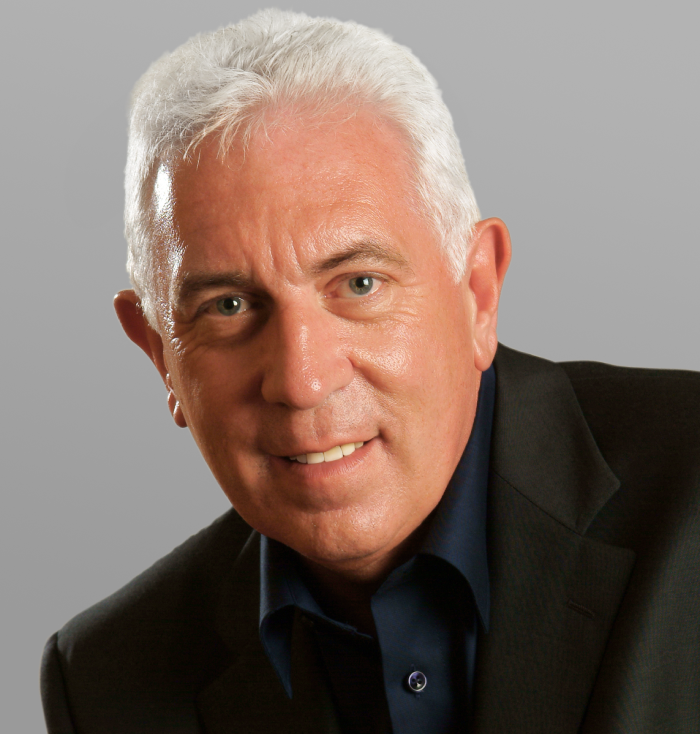 Described in The World Anthology of Psychology as, "One of the most influential Psychologists of our time", Peter Saville is a highly acclaimed pioneer and thought leader whose creativity and ingenuity has had a profound impact on the field of applied psychology. Professor Peter Saville is credited with having established the modern industry of occupational psychology.

In 1970 Peter Saville joined the National Foundation for Educational Research (NFER), the main publisher of psychometric tests at the time, as an assistant psychologist, standardising and adapting a wide range of psychological tests including the Wechsler Adult Intelligence Scale (WAIS), The Wechsler Intelligence Scale for Children (WISC) and the Wechsler Pre-School and Primary Scale of Intelligence (WPPSI). Saville worked on 'Mary Sheridan's From Birth to Five Years: Children's Developmental Progress' by the distinguished Pediatrician Mary Sheridan. He also wrote the British Manuals to The Bennett Test of Mechanical Comprehension, various reading tests for seven year old's and The Computer Programmer Aptitude Battery (CPAB). His department also prepared the materials for the first edition of the British Ability Scales and was responsible for the distribution of many of the educational tests of the NFER. He was involved in the acquisition of the tests of The National Institute of Industrial Psychology (NIIP), first founded by Charles Samuel Myers. By the age of 27 he had moved up the ranks and was promoted to Chief Psychologist in the Test Division, responsible for the standardisation of psychological and educational tests for clinical, educational and industrial use. Whilst at the National Foundation for Educational Research, it was the then Director, Professor Stephen Wiseman, who observed that Saville, unusually, had both an academic and business brain.

In 1977, Peter Saville earned his Ph.D. from research into personality structure on a representative sample of over 2000 British adults, using a sampling methodology proposed by Claus Moser. Factor analysis provided a five variable solution of traits; Anxiety, Extraversion, Warmth, Imagination and Conscientiousness – effectively what was to become known as the Five Factor Model (FFM) or Big Five of Personality. Professor Hans Eysenck, (the most cited psychologist next to Sigmund Freud) was appointed as external examiner.

In the same year he completed his PhD thesis, Peter Saville along with Roger Holdsworth founded Saville and Holdsworth Limited (SHL) - entirely self-financing, they took the company from £100 to a flotation on the London Stock Exchange. They offered shares to all employees at 10p per share which later floated at £2.40, the company reaching a value of £240 million. SHL was subsequently subject to a buyout which was backed by HG Capital, who in turn sold it to CEB, making the brand worth over half a billion USD$.

Professor Saville went on to create the original Occupational Personality Questionnaires [OPQ] in 1984, and was responsible for the British Standardisation of the 16 Personality Factor questionnaire in the early 1970s. Today, over 50 million of his personality, aptitude and motivation tests are used annually to improve the selection, development and wellbeing of people at work and his tests and questionnaires, are used in over 80 countries globally in more than 60 languages. 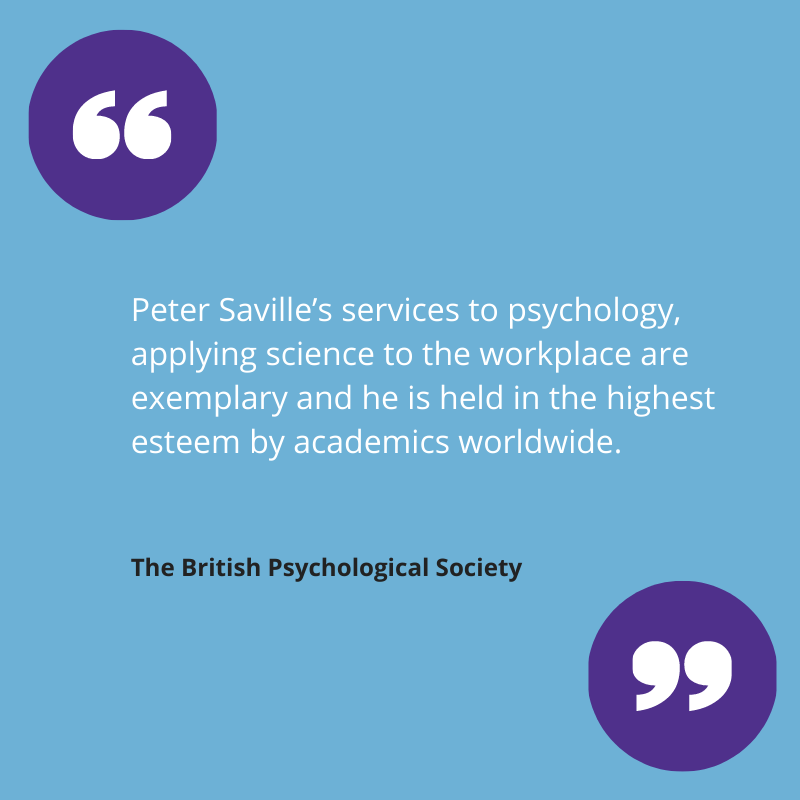 In 1998 Peter Saville was listed by Enterprise Magazine as one of the UK's Top Entrepreneurs and in 2001 was nominated as one of Britain's Top Ten Psychologists, the only Industrial Psychologist included. That same year his photograph hung in London's National Portrait Gallery after he was presented with the British Psychological Society Centenary Award for Distinguished Contributions to Professional Psychology. His citation read:

"Ultimately the standardisation of questionnaires not specifically designed for an occupational arena made him frustrated and in 1977 led him set up his own company, which subsequently became SHL Group plc, with fellow Psychologist Roger Holdsworth. In doing so he established Britain as a centre for Psychometric testing and is responsible for cementing the notion of fair and objective assessment in Human Resource departments across the world. As a skilled psychometrician and visionary leader, Peter Saville has made a significant impact on professional psychology in the UK and beyond. The widespread use of the tests which he developed by many major companies and public bodies is testament to the influence of his remarkable ideas".

A thought-leader within multiple professions and fields of study, Professor Peter Saville has been a specialist consultant to the United Nations in staff selection, has been invited to speak in over 65 countries, at International Conferences and featured on a number of TV and radio programmes in the UK and the United States, including BBC Breakfast Business News when he was interviewed about leadership. He was International Consultant Psychologist to Mensa, where he succeeded Professor Philip E. Vernon, and Psychometric Test Consultant to Hodder and Stoughton Educational. He has also worked for many FTSE 100 companies, the Ministry of Defence and charities such as Oxfam and the Royal National Institute for the Blind. His companies have been involved in assessing and researching the selection and assessment of retail staff to air traffic controllers, sales executives, surgeons to senior board members.

Professor Peter Saville is a Chartered Psychologist, a Chartered Scientist, was made a Fellow of the Institute of Directors in October 2012, is a Senior Associate of the Royal Society of Medicine and a Fellow of the Royal Society of Arts. In January 2012 he was given Academic Fellowship of the Chartered Institute of Personnel and Development (CIPD); the highest accolade that the CIPD can bestow and in 2012 he was awarded the Honorary Fellowship of the British Psychological Society (BPS). Honorary fellowship is the highest that the BPS can confer and recognises excellence in psychology. It has been established for 100 years, and is currently held by only some 35 psychologists worldwide. The eulogy states;

"Peter Saville is one of the most prominent and creative occupational psychologists in the UK and he has an impeccable global reputation... as executive chairman of SHL with some 300 psychologists and now Saville Consulting, he has flown the flag for Britain and objective assessment around the world and has been referred to as an 'assessment guru'... His measures of ability, personality, motivation and talent are extensively used across the globe and have had major impact on HR and on the practice and professionalism of a generation of psychologists. Peter Saville has enhanced the impact of psychology from both a practical and academic perspective, and his innovative approach continuously drives forward the research and application of psychology into the internet age. Professor Saville's services to the field of psychology in terms of applying science to the workplace and creating the global gold standard for psychometric tests are exemplary. He is held in the highest esteem by academics worldwide."

Saville was professor of occupational psychology at Queen's University from 1991 to 1997, and is currently visiting professor of Talent Management and Leadership at Kingston Business School, London. Still trailing a blaze in the use of insight, science, and technology to help organizations create greater value, Professor Peter Saville recently founded 10x Psychology, a company dedicated to improving people decisions in the workplace through machine-learning, predictive analytics and cutting-edge validated assessment techniques.

Professor Peter Saville has three sons and two daughters and is married to Jemaine, previously a social worker in child protection. His interests include sport, politics, music and military history.

In 2021, Professor Peter Saville published his memoirs 'Testing Times: Psychologist at Work'. Essential reading for anyone with an interest in Occupational Psychology, Entrepreneurship and Leadership; ‘Testing Times’ charts the author's remarkable career and life. This is a great book! Engaging as it is insightful on so many levels, it's easy to see why it has garnered such glowing praise from academics, business leaders, politicians and professional footballers alike.

Whatever your connection with psychology, you'll find time reading 'Testing Times', most definitely time well spent. Triumph over adversity, a case study in grit, resilience and growth mindset and a medical mystery worthy of an episode of House - 'Testing Times: Psychologist at Work' by Professor Peter Saville has it all. 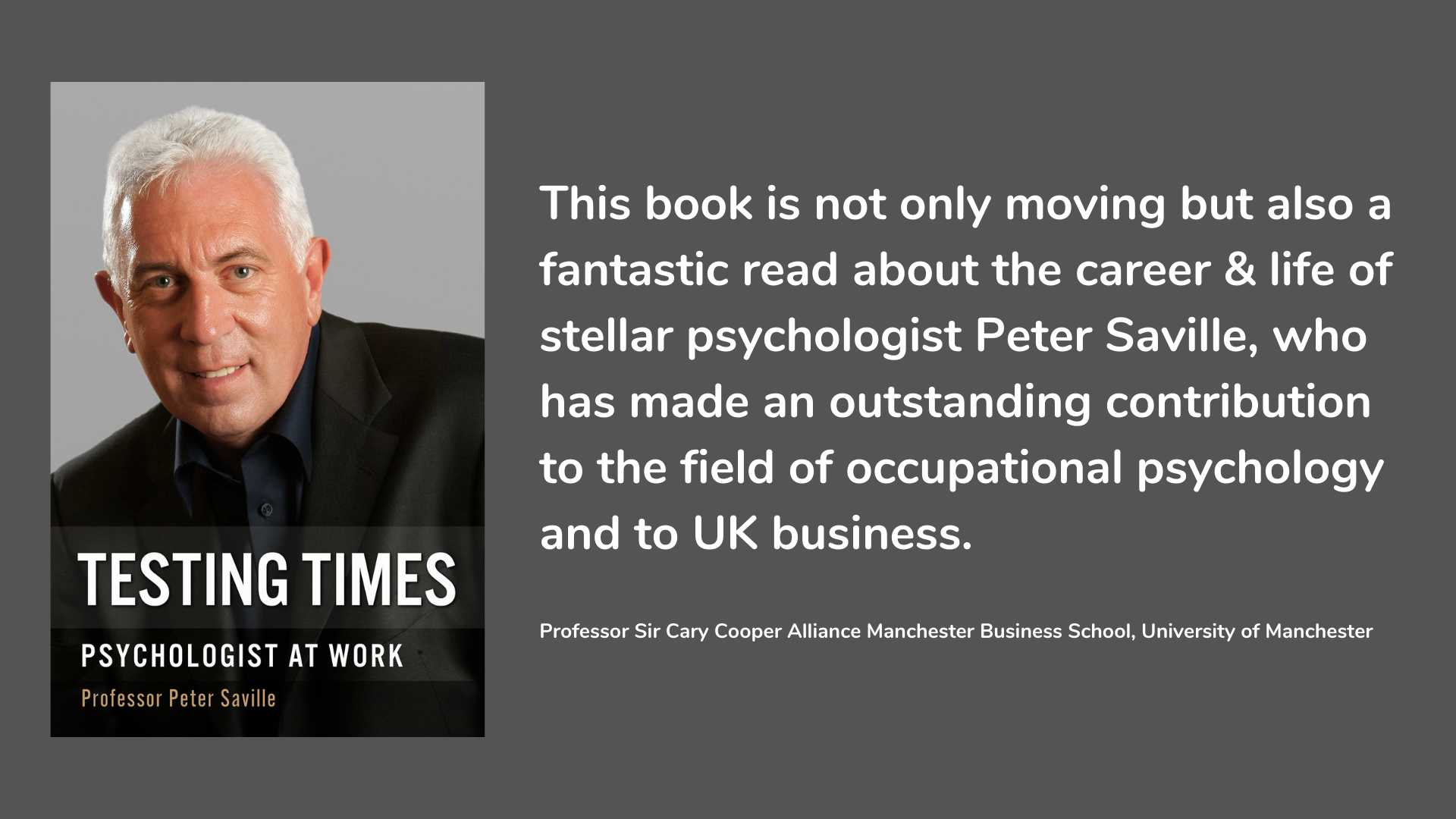 A fascinating journey into the world of psychometrics; its growth and development to become a global imperative in business today. Join Professor Peter Saville as he combines the practical realities of entrepreneurship with science, research, and the evidence behind psychometrics. This book has historical significance for the psychology of work, and it highlights how to build future directions for evidence-based psychometrics, technology, and research. The personal touch combined with science makes it a must read. (Dr Hazel McLaughlin President, British Psychological Society (BPS)

Know someone who would be interested in learning about the life and work of modern psychology pioneer Professor Peter Saville?


Go Back To the Psychology Pioneers Page