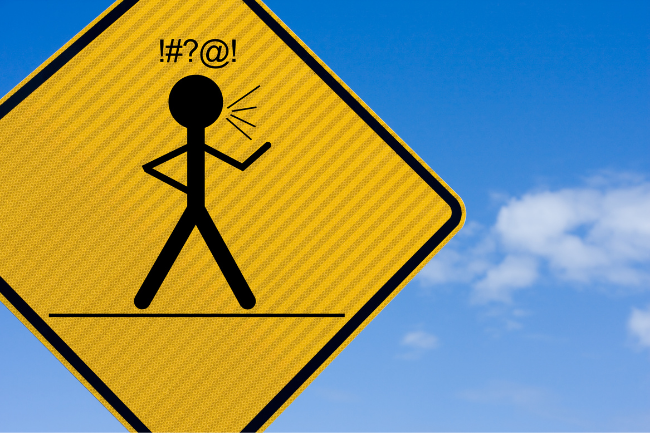 The use of obscene or taboo language, or swearing as it’s more commonly known, is often seen as a sign that the speaker lacks vocabulary, cannot express themselves in a less offensive way, or even lacks intelligence. Studies have shown, however, that swearing may in fact display a more, rather than less, intelligent use of language.


While swearing can become a habit, we choose to swear in different contexts and for different purposes: for linguistic effect, to convey emotion, for laughs, or perhaps even to be deliberately nasty. Psychologists interested in when and why people swear try to look past the stereotype that swearing is the language of the unintelligent and illiterate.


Are you fluent in swearing?


In fact, a study by psychologists from Marist College in the US found links between how fluent a person is in the English language and how fluent they are in swearing. The former, verbal fluency, can be measured by asking volunteers to think of as many words beginning with a certain letter of the alphabet as they can in one minute. People with greater language skills can generally think of more examples in the allotted time. Based on this approach, the researchers created the swearing fluency task.


What this correlation suggests is that swearing isn’t simply a sign of language poverty, lack of general vocabulary, or low intelligence. Instead, swearing appears to be a feature of language that an articulate speaker can use in order to communicate with maximum effectiveness. And actually, some uses of swearing go beyond just communication.


What we found was that those who swore withstood the pain of the ice-cold water for longer, rated it as less painful, and showed a greater increase in heart rate when compared to those who repeated a neutral word. This suggests they had an emotional response to swearing and an activation of the fight or flight response: a natural defence mechanism that not only releases adrenalin and quickens the pulse, but also includes a natural pain relief known as stress-induced analgesia.


This research was inspired by the birth of my daughter when my wife swore profusely during agonising contractions. The midwives were surprisingly unfazed, and told us that swearing is a normal and common occurrence during childbirth – perhaps for reasons similar to our iced water study.


We wanted to further investigate how swearing and emotion are linked. Our most recent study aimed to assess the opposite of the original research, so instead of looking at whether swearing induced emotion in the speaker we examined whether emotion could cause an increase in swearing fluency.


Participants were asked to play a first person shooter videogame in order to generate emotional arousal in the laboratory. They played for ten minutes, during which they explored a virtual environment and fought and shot at a variety of enemies. We found that this was a successful way to arouse emotions, since the participants reported feeling more aggressive afterwards when compared with those who played a golf videogame.


Next, the participants undertook the swearing fluency task. As predicted, the participants who played the shooting game were able to list a greater number of swear words than those who played the golf game. This confirms a two-way relationship between swearing and emotion. Not only can swearing provoke an emotional response, as shown with the iced water study, but emotional arousal can also facilitate greater swearing fluency.

What this collection of studies shows is that there is more to swearing than simply causing offence, or a lack of verbal hygiene. Language is a sophisticated toolkit, and swearing is a part of it. Unsurprisingly, many of the final words of pilots killed in air-crashes captured on the “black box” flight recorder feature swearing. And this emphasises a crucial point, that swearing must be important given its prominence in matters of life and death. The fact is that the size of your vocabulary of swear words is linked with your overall vocabulary, and swearing is inextricably linked to the experience and expression of feelings and emotions.

Know Someone Who Would Like To Read This Article?