The Psychology of Coronavirus:

Normalcy Bias and The Need for Hypervigilance

In many respects, today is like any other day for me. I'm at home writing about psychology, something I've done pretty much every day for the last 12 years. In most other respects, today (with the exception of the last 9 days) is unlike any other day. You see, I live in Spain and on Saturday, March 14th the government in response to the Coronavirus disease (COVID-19) pandemic declared a 15 day state of alarm that locked down the country and imposed severe restrictions on movement and yesterday it was announced that this state of alarm has been extended by a further 15 days until April 12th.

This post is not about my life under lock down - Having to stay at home with my family, ample food and Netflix is hardly a modern day version of The Shawshank Redemption! No, this post stems for the fact that the rest of my family lives in the UK and it worries me to my core that the gravity of the situation doesn't seem to be registering for many people; this despite the best efforts of those working on the front-line against COVID-19 to make people aware of what is about to unfold.

In addition to healthcare workers seeking to inform and educate as the crisis escalates, there is growing contempt for people who seem determined to carry on as if nothing is happening. Perfectly illustrated on Twitter via the trending hashtag #COVIDIOT and associated social media posts. 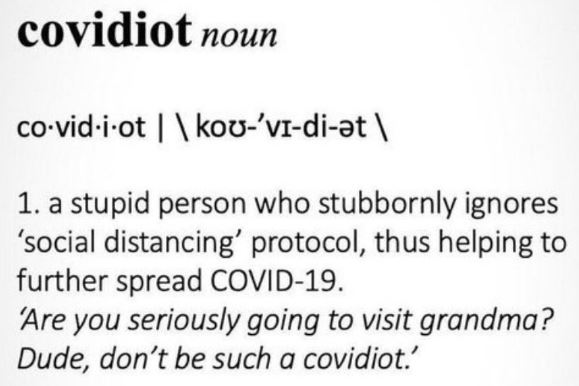 The problem is, simply telling people you think they are stupid doesn't really help change things; but being able to explain their behavior just might!

Enter, Amos Tversky and Daniel Kahneman whose groundbreaking work on heuristics i.e. quick, simple, unconscious ways of thinking people employ to make sense of the world (and the cognitive biases contained therein) revolutionized our understanding of human rationality. A cognitive bias of particular relevance to the present discussion is 'Normalcy Bias', also known as the ostrich effect, incredulity response and analysis paralysis. Normalcy bias refers to the tendency for people to minimize the probability of potential threats or their dangerous implications (Omer and Alon).

Although movies show crowds screaming and panicking, most people move dazedly through normal activities in a crisis. (Esther Inglis-Arkell)

Normal Is A Coping Mechanism

The important thing to bear in mind is that normalcy bias is a coping mechanism that kicks in automatically for many of us during times of stress. As such, resistance to change is extremely common and continuing to act as normal is often the default response when coming to terms with strange and atypical situations.

When you want to make a change in how you operate, you need to consider the brain's urge to protect you. The brain can interpret it like this: Change = Harm or Discomfort. (Dr. Celine Mullins)

Asked by the BBC's Vicki Young why he is not imposing social distancing measures, Mr Johnson says the government has already taken "draconian" steps such as closing schools and pubs, bars and restaurants.

"It is very important for people's mental and physical wellbeing that they should be able to get out and exercise," he says, adding not everyone has a private open space. "That is why parks and open spaces are absolutely crucial."

He says that - despite this - people must follow social distancing advice.


The Conflict Model of Decision Making

1. Unconflicted Inertia: People decide to continue with their usual routine in the belief that no serious consequences will occur.

3. Defensive avoidance: People base their decisions on the belief that the best available protective measures will not safeguard their safety.

4. Hypervigilance: People's decisions are driven by the realization that lack of time rules out the possibility of considering alternative courses of action.

5. Vigilance: People actions result from the realization that sufficient time exists to decide upon the most appropriate response to the threat posed.


A Call For Hypervigilance

Given that time to deliberate is no longer an option, there is only one pattern of decision making that needs to be adopted immediately, namely, hypervigilance in respect of a clear and unambiguous call to action.

Worryingly, this is not the approach currently being promoted in the UK. So to my family and friends and anyone who else who reads this, here is a clear and unambiguous message that demands your hypervigilance.

In case you missed it the first time.