Professor Brian Little received his early education in British Columbia and his Ph.D. in psychology from the University of California at Berkeley. He has taught with distinction at Oxford, Carleton, McGill and Harvard Universities. He was elected as a Favorite Professor at Harvard for three consecutive years.

Professor Little is a pioneer in the study of personality, motivation and well-being. He has written a bestselling book, Me Myself and Us: The Science of Personality and the Art of Well-being, and his new book, Who are You Really? The Surprising Puzzle of Personality, based on his extremely popular TED 2016 talk, was published in August, 2017.

What first sparked your interest in the study of human personality?

I was originally interested in neuropsychology as I had been a Research Assistant in Child Neuropsychology as an undergraduate and planned to do a Ph.D. at the University of California, Berkeley on acetylcholinesterase activity in the brains of small mammals. One day I was reaching up for the Stereotaxic Atlas of the Brain and pulled down a mis-shelved copy of George Kelly's Psychology of Personal Constructs. I leafed through it, sat down on the library floor and hours later decided I really wanted to pitch my tent in personality psychology. I still went to Berkeley but was able to divest myself of rodents and threw myself into the study of human lives.

What would you say have been the most significant developments within the field of personality psychology since your scholarly interest in the subject began?

I think the major developments are nicely captured in Dan McAdams' hierarchical model of personality. It locates three different levels at which personality can be explored. At the base level are traits, and especially the five factor model. The seeming demise of trait psychology after Mischel's Personality and Assessment was published in 1968 was met with a very robust defence of the trait concept. Although I identified more with the Mischellian critique (we were both Kellians to the core) I was convinced that traits, especially if studied through the lens of their neuropsychological underpinnings, were valuable ways of describing, if not explaining, personality. They were highly consequential for life outcomes ranging from health and happiness to success in academic and occupational pursuits. However, I saw traits as necessary, but not sufficient, for studying human personality.

That something else beyond traits are what I called PAC units (personal action constructs)and they reside at the second level of the hierarchy. Unlike the relatively stable big five traits, PAC units are dynamic, idiosyncratically crafted and contextually embedded. My own PAC unit, the personal project, which I developed in the late seventies and early eighties, anchors the PAC level of personality which also includes units such as personal strivings, life tasks, personal goals, current concerns and possible selves. Personal projects are extended sets of personally salient action in context. In other words they merge constructivist and contextualist views of personality.

The third level, which has been very influential in recent personality psychology, concerns the life narratives and personal stories we construct to make sense of our lives. McAdams' own work is central to this. Our own work on idio-tapes deals with the stories we tell about salient images in our lives as viewed through an imaginary video-tape that allows us to mix real events with personal symbols and historical allusions. Idio-tapes are not to be confused with idiot-apes which spellcheckers sometimes insist on. I believe some primatologists interested in neuropathology have attended talks I have given on this.

In a review of your critically acclaimed book 'Me, Myself and Us: The Science of Personality and the Art of Well-being,' Daniel Pink states: "I defy you to read his book and not change the way you think about your friends, your family, and yourself." What has been the most revealing way in which you have changed how you think about yourself?

I think I learned over the years that personality is not fixed and unchangeable but that we can engage in what I call "free traits" that allow us to override our more stable big five traits. This certainly applied to me. As my students know, I am a biogenic introvert but one of my core personal projects impels me to act as a pseudo-extravert when I am lecturing. This enactment of a free trait involves the adoption of a sociogenic script to advance a personal project that runs counter to one's biogenic dispositions. Such enactments can be depleting and require 'restorative niches" to which we can repair after acting out of character. Without such restoration I believe that protectedly acting out of character can lead to burnout.

My own behaviour in this respect was dealt with in some detail by Susan Cain in her book "Quiet" where she wrote about a strange little Canadian professor who was lecturing at Harvard and would, on occasion, retreat to the men's room to restore himself from the exciting stimulation of his students. Feet up, to avoid detection.

What is it about personal projects that led you to propose that they may serve as more adequate units of analysis within the study of personality?

Personal projects analysis (PPA) is based on a set of ten measurement criteria that differ from traditional ways of assessing personality and asks some fundamental questions about the assessment devices we use in our research and practice. For example are your units of analysis reflexive, personally salient, temporally extended rather than snapshots, integrative and so on. Many units will satisfy some of these measurement criteria, but personal projects, unsurprisingly, embody all of them. One of the criteria on which personal projects contrast with traits as units of analysis is that of tractability - to what extent does the unit allow us to assess change possibilities of the research participant or client.

You're quoted as saying that "we have witnessed a 'conative evolution' in personality psychology." Could you briefly explain what you mean by this?

Personal projects are often cited in textbooks as examples of cognitive units of analysis but I believe that over the last three decades there has been a surge in conative units - that have been rapidly evolving in the research literature. Most PAC units are conative in nature - assessing what individuals are striving for, motivated to achieve--a prospective creature, not simply a cognizing one.

I loved your account of the finding that extraverts use more diminutive names upon meeting someone e.g. Charles rapidly becomes Charlie and then Chuck and then Chuckles baby! Could you offer another interpersonal example such as this which would also allow us to conclude with confidence that we were in the presence of a card carrying extravert?

Yes, indeed. I recall a friend and colleague who was an over the top extravert and with whom I had a consulting venture. The project team had called in a fellow from the finance department of the provincial department - let's call him Michael. It became very clear within a couple of days that his communication style and general demeanour was bringing the project to a screeching halt. My friend and I were both asked what we thought of Michael. As is typical of introverts, I was cautious: "Michael has a tendency, at times, of behaving in a way that some of us might see as, perhaps, more assertive than is normally required." My extraverted colleague said it more pithily. "Brian, that what I just said - he's an asshole."

What does the phrase 'degrees of freedom' mean within the context of personality psychology?

I find the statistical metaphor of degrees of freedom is an evocative way of looking at how we enhance the quality of lives. Kelly's personal construct theory emphasized the utility of having many independent ways of construing life's options and our own personal projects perspective looks at how degrees of freedom in living arise not only from our cognitive flexibility but from the contextual affordances and constraints designed into our social ecologies.

A young woman may have the aspiration to pursue higher eduction and the cognitive skills to imagine a possible self based on those aspirations. But her social ecology may proscribe such a project - "Don't even think about it." Degrees of freedom, in short, need to be examined and enhanced at both the personal and the broader social ecological and political levels.

Could you tell us about your latest book - Who Are You, Really? The Surprising Puzzle of Personality? 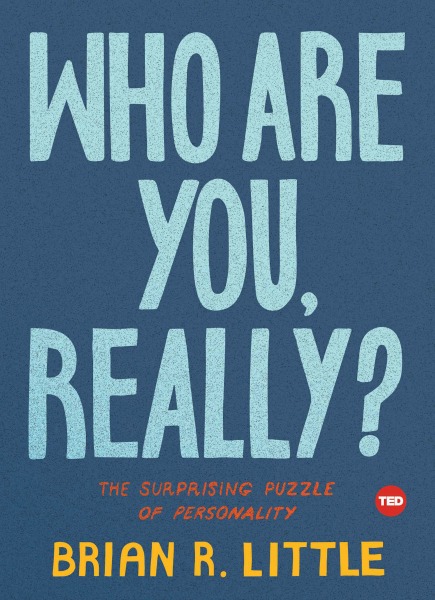 My new book is based on my TED2016 talk by the same name and focuses on our research on personal projects, free traits and the costs and benefits of acting out of character. Although I dealt with these in my earlier books, the latest one is a relatively short treatment that also gets into issues that are new. One is the notion of "well-doing" which, unlike "well-being" focuses less on subjective states like happiness and more on the enactments or doings of our daily lives. I explore the proposition that human flourishing is the sustainable pursuit of core personal projects in our lives.

Another topic that I introduce has to do with the whole concept of authenticity. I take what might be seen as a rather controversial view - that admonishing others (or oneself) to be authentic might be misguided. The reason for this is that there are three different ways of "doing" authenticity. One is to show biogenic authenticity by showing fidelity to one’s needs and dispositions - our first natures. A second is to display sociogenic authenticity by acting on the basis of the cultural and social codes transmitted during socialization and that guide us in how we ought to act. The third is idiogenic authenticity, which is showing fidelity to one’s core personal projects without which one might question whether it is possible to carry on at all. All three are important and justifiable ways of being one self. They may conflict and at times we may need to be strategically unbalanced in our lives. Like toddlers who are toddling the immediate future may be a bit perilous while their foot is in the air. But it is only through that risk that movement is possible.


What personal projects are you currently working on?

I continue trying to stop being a professor, but I suspect I will continue to profess until I keel over at the podium. Family and travel keep me human and the world of intellectual disputation and discovery continue to delight me. I ride a mountain-bicycle on flat surfaces and work on treating our cat for his insouciance and annoyingly ironic approach to life.