Not All Memories Fade With Age

Changes in brain activity compensate for some types of normal decline in our ability to remember. 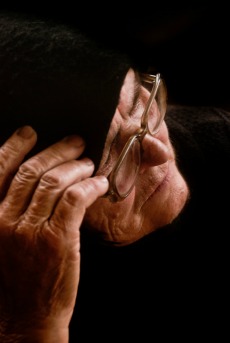 
The following article was originally published on PENN STATE NEWS


It may happen more than you care to admit. You draw on a memory from the not-so-distant past, and the bucket comes back empty. Your 10-year-old child, however, can recall the moment in a flash. "It was last summer. That street-fair we went to in Delaware. The guy with the wrinkly dog."

The details then flood back - but without the youthful prompt, they were lost in the mist. Do you just chalk it up to old age?

"Everybody thinks: 'Memory declines with age,'" says cognitive neuroscientist Nancy Dennis. "And it does, to some degree. But it isn't that simple. Some types of memory fade as we age, but others are very stable." 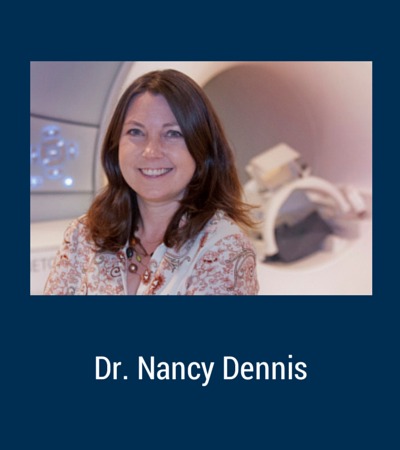 
Dennis, an assistant professor of psychology at Penn State, studies the aging brain. Using functional MRI, which offers a look at brain activity in real-time, she identifies changes that occur as people get older, then tries to match this neural evidence with cognitive behavior. "The one thing memory researchers have found," she says, "is that as we age, the brain activates different regions for certain memory tasks than it does in younger people. The big question is 'Why?' What do these changes in brain activity mean?"

Memory, she explains, is not a single construct. What psychologists know as "item memory," the ability to recall individual events or impressions, is actually quite stable in older adults, she says. What tends to fall off is "association memory," the ability to link those impressions. You might remember a name or recognize a face, in other words, but putting the two together becomes a challenge.

In a similar way, older adults typically hold their own in "familiarity," remembering the gist of an event or conversation, but do less well at "recollection," calling up specific details.

Association memory and recollection are both governed by the hippocampus, a region in the medial temporal lobe, Dennis says. Of all the brain's regions, she notes, the hippocampus shows some of the greatest loss of volume associated with aging. By contrast, the area surrounding the hippocampus shows much less shrinkage. "It's believed that these other structures are more responsible for familiarity and item memory," she says.

Indeed, among older adults asked to complete memory tasks while their brain activity is being monitored by the fMRI scanner, Dennis sees less activity in the hippocampus and more in the surrounding regions - the parahippocampal gyrus and the entorhinal cortex - when compared to younger subjects. 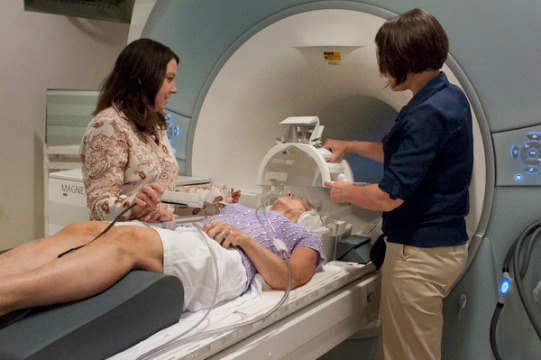 Nancy Dennis, left, assists a subject while scanner technician Amanda Gearhart connects a 12-channel head coil in place over the subject's head to prepare for an MRI scan in the Social, Life, and Engineering Sciences Imaging Center located in Chandlee Laboratory on Penn State's University Park campus. By combining functional MRI scans with tests of memory performance, Nancy Dennis and her associates are gaining a better understanding of age-related memory loss.


But what exactly does the shift in activity mean? Is the diminishing brain simply throwing out all lifelines, casting about desperately for assistance from any quarter? Or is the brain adroitly rewiring itself, adapting to one region's diminishment by arranging for other, stronger regions to take over certain functions?

Ten years ago, Roberto Cabeza, a neuroscientist at Duke University who advised Dennis when she was a postdoctoral fellow there, published an influential paper advancing the compensatory view. Imaging the brains of young adults, older adults who did well on memory tests, and older adults who did poorly on the tests, Cabeza showed that the first and last groups were using regions on only one side of the brain to complete the tasks, while the middle group - what he called "high-performing" older adults - were calling on both sides of the brain. The high-performers' brains, he concluded, had successfully adapted to age-related neural decline.

The shift in activity, Dennis says, reflects a successful change in cognitive strategy, as older adults tend to rely more on getting the gist of an experience than younger adults do, and less on grasping the details. But adaptation has its limits, she notes. The reliance on familiarity runs into trouble where two or more experiences are basically similar. "When memories share a common gist they can easily get confused," she says. This confusion can lead to what's known as false memory.

"When we think of memory problems, we tend to think only of forgetting," Dennis explains. "False memory is remembering things that never happened. You could swear you took the dog out last night, or swallowed this morning's pill, but you didn't."

In this case, the brain tends to fill in the specifics based on familiarity with past events. In one current study, Dennis notes, she shows photos of typical domestic scenes - kitchens and bathrooms - then asks subjects to recall their details. Was there a sink in that kitchen? "People tend to answer yes," she says, even if there is no sink present, "because their mind knows a kitchen is supposed to have a sink. It tries to fill in the blanks."

This tendency can have more serious implications in matters such as eyewitness identification. "There's a lot of research that shows that in the absence of the actual person in a line-up, people tend to endorse the person that most closely resembles the actual person," Dennis says. "They're relying on gist. The problem is that now you have a true memory of the wrong person, and your mind tends to build on that."

Here again, brain scans can offer insight, Dennis says. In younger adults monitored by fMRI, there is very little change in terms of brain activity between false memory and true memory. "Aside from a few select regions, such as the hippocampus, neurally, you almost can't tell the difference," she says. In older adults, however, the brain regions activated for false memories are different than those recruited for true memories, suggesting a different cognitive process.


One key to help in accurate remembering is the ability to forget what's inessential. Intentional forgetting, Dennis says, is an exercise of cognitive control. "It can be a very beneficial strategy. You forget where you parked your car yesterday so you can remember where you parked it today." This ability to tune out irrelevant information has also been shown to decline with age.

A certain amount of age-related memory loss is to be expected, she says. In the case of normal decline, however, behavioral strategies may help. Dennis hopes soon to start work with a colleague at another university who is trying out different approaches to help older adults with association memory. Her role, she says, will be to assess the corresponding neural activity, helping to determine which strategies are most beneficial and why.

"Different strategies may work better for different tasks," she says. "But whether memory is stable or shows decline, there are strategies we can use to improve on performance."

That comes as welcome news. After all, you can't always rely on your kids to remember.

Back To Top Of The Page

Have your say about what you just read! Leave me a comment in the box below.
By David Webb, Copyright © 2008-2023 All-About-Psychology.Com