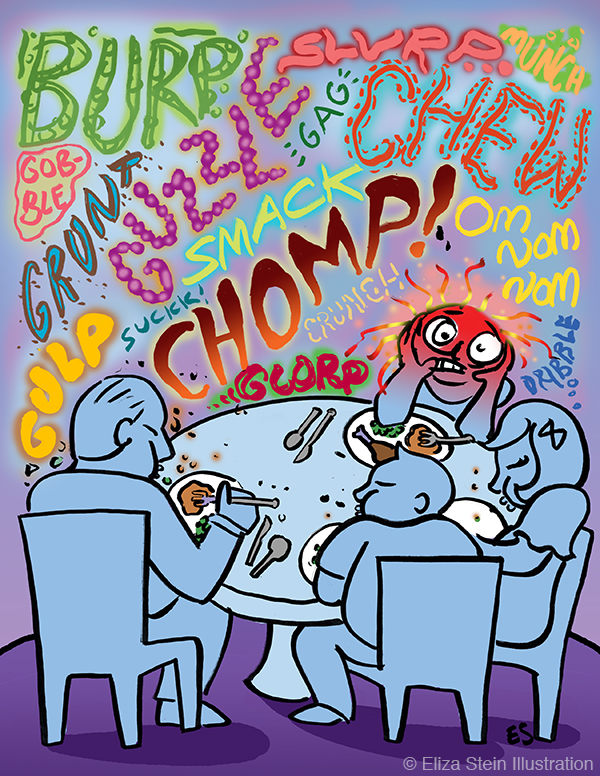 
What happens when you hear someone do any of the following: smacking their lips while eating, slurping drinks, breathing, yawning, sniffling, humming, tapping their fingers, typing or texting with the keyboard clicks switched on? If you have a strong emotional response and a desire to escape or stop the sound, you may have misophonia.


Literally meaning a “hatred of sound”, misophonia is a neurophysiological condition in which people have a disproportionately negative reaction to specific sounds. People with the condition are aware that they overreact to certain sounds, it’s just that their reaction is not within their control.


The trigger sounds that people with misophonia react to can vary from person to person. However, some categories are more common than others and they tend to be related to the mouth or eating, breathing or nasal sounds and finger or hand sounds. Evidence suggests that this aversion develops in childhood and tends to get worse over time.


People with misophonia find trigger sounds more distressing if they are produced by family members rather than by strangers. This may make family meals particularly problematic for misophonics.

Misophonic responses tend to be emotional, with anger being the most common response, ranging from mild annoyance to extreme rage. People can also feel other strong emotional responses such as anxiety or disgust. Physiological responses include an increase in blood pressure and heart rate, sweating and muscle contractions.


You might assume that everyone has, to some degree, a negative response to certain sounds, such as a sudden, loud bang or high-pitched squeal. Yet in misophonia, people can react to sounds that are not widely considered unpleasant, such as whispering or soft breathing. Quiet sounds can evoke as much of a reaction in misophonics as loud sounds.


Researchers have investigated whether misophonia is linked to, or caused by, other psychiatric or physical conditions, such as tinnitus, obsessive-compulsive disorder, eating disorders or post-traumatic stress disorder. The evidence suggests that, although some association exists with these conditions, none of these disorders can fully explain misophonic symptoms, suggesting misonphonia is a separate and independent condition in its own right.


Simply ignoring annoying sounds is not possible for misophonics. It appears that selective attention may be impaired in people with the condition, particularly when exposed to their trigger sounds. So if every time someone is close to their worst sounds, and their attention becomes fixated on it, the only options may be fight or flight.


Misophonics have also reported that the condition has had such a negative effect on their lives that they have avoided social situations, relationships have broken down, and some have even thought about taking their own life.


Unfortunately, our understanding of the condition is in its infancy and so are treatments, although some evidence suggests that cognitive behavioural therapy may help. But given that the condition was only identified in 2001, we still have a long way to go in understanding it.