John Dewey And The Chicago School 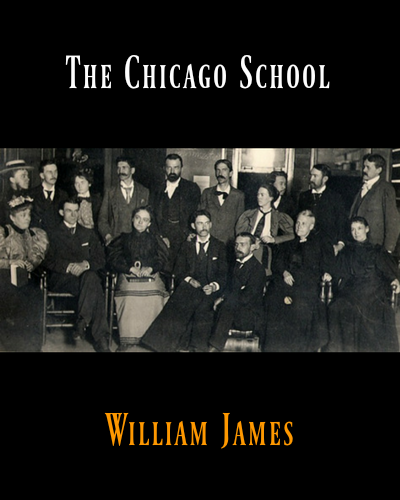 In this classic article originally published in the very first edition of The Psychological Bulletin in January 1904, psychology legend William James discusses the influential Chicago school of thought, led by John Dewey.

The rest of the world has made merry over the Chicago man's legendary saying that Chicago hasn't had time to get round to culture yet, but when she does strike her, she'll make her hum.' Already the prophecy is fulfilling itself in a dazzling manner. Chicago has a School of Thought! - a school of thought which, it is safe to predict, will figure in literature as the School of Chicago for twenty-five years to come. Some universities have plenty of thought to show, but no school; others plenty of school, but no thought. The University of Chicago, by its Decennial Publications, shows real thought and a real school. Professor John Dewey, and at least ten of his disciples, have collectively put into the world a statement, homogeneous in spite of so many cooperating minds, of a view of the world, both theoretical and practical, which is so simple, massive, and positive that, in spite of the fact that many parts of it yet need to be worked out, it deserves the title of a new system of philosophy. If it be as true as it is original, its publication must be reckoned an important event. The present reviewer, for one, strongly suspects it of being true.

The briefest characterization is all that will be attempted here. Criticism from various quarters will doubtless follow, for about the new system as a bone of contention discussion is bound to rage.

Like Spencer's philosophy, Dewey's is an evolutionism; but unlike Spencer, Dewey and his disciples have so far (with the exception of Dewey's admirable writings on ethics) confined themselves to establishing certain general principles without applying them to details. Unlike Spencer, again, Dewey is a pure empiricist. There is nothing real, whether being or relation between beings, which is not direct matter of experience. There is no Unknowable or Absolute behind or around the finite world. No Absolute, either, in the sense of anything eternally constant; no term is static, but everything is process and change.

Like Spencer, again, Dewey makes biology and psychology continuous. 'Life,' or ' experience,' is the fundamental conception; and whether you take it physically or mentally, it involves an adjustment between terms. Dewey's favorite word is 'situation.' A situation implies at least two factors, each of which is both an independent variable and a function of the other variable. Call them E (environment) and O (organism) for simplicity's sake. They interact and develop each other without end; for each action of E upon O changes O, whose reaction in turn upon E changes E, so that E's new action upon O gets different, eliciting a new reaction, and so on indefinitely. The situation gets perpetually 'reconstructed,' to use another of Professor Dewey's favorite words, and this reconstruction is the process of which all reality consists.

No biological processes are treated of in this literature, except as incidental to ethical discussion, and the ethical discussions would carry us too far afield. I will confine myself therefore to the psychological or epistemological doctrines of the school.

Consciousness is functionally active in readjustment. In perfectly 'adapted' situations, where adjustments are fluent and stereotyped, it exists in minimal degree. Only where there is hesitation, only where past habit will not run, do we find that the situation awakens explicit thought. Thought is thus incidental to change in experience, to conflict between the old and new. The situation must be reconstructed if activity is to be resumed, and the rejudging of it mentally is the reconstruction's first stage. The nucleus of the Studies in Logical Theory becomes thus an account of the judging process.

"In psychological terms we may say, in explanation of the judging process, that some stimulus to action has failed to function properly as a stimulus, and that the activity which was going on has been interrupted. Response in the accustomed way has failed. In such a case there arises a division in experience into sensation content as subject and ideal content as predicate. In other words, - upon failure of the accustomed stimulus to be adequate - activity ceases, and is resumed in an integral form only when a new habit is set up to which the new or altered stimulus is adequate. It is in this process of reconstruction that subject and predicate appear." The old subject (the that of the situation) stands for the interrupted habit, the new subject (the that with the new what added) stands for the new habit begun. The predicate is thus essentially hypothetical — the situations to which the use of it leads may have quickly to be reconstructed in turn. In brief, S is a stimulus intellectually irritating; P is an hypothesis in response; SP is a mental action, which normally is destined to lead or pass into action in a wider sense. The sense of ' objectivity' in the S emerges emphatically only when the P is problematic and the action undefined. Then only does the S arrest attention, and its contrast with the self become acute. 'Knowing; therefore, or the conscious relation of the object to the self, is thus only an incident in the wider process of 'adjustment,' which includes unconscious adjustments as well.

This leads Professor Dewey and his disciples to a peculiar view of 'fact.' What is a fact? A fact and a theory have not different natures, as is usually supposed, the one being objective, the other subjective. They are both made of the same material, experience-material namely, and their difference relates to their way of functioning solely. What is fact for one epoch, or for one inquirer, is theory for another epoch or another inquirer. It is 'fact' when it functions steadily; it is ' theory ' when we hesitate. 'Truth' is thus in process of formation like all other things. It consists not in conformity or correspondence with an externally fixed archetype or model. Such a thing would be irrelevant even if we knew it to exist. Truth consists in a character inclosed within the 'situation.' Whenever a situation has the maximum of stability, and seems most satisfactory to its own subject-factor, it is true for him. If accused here of opening the door to systematic protagoreanism, Professsor Dewey would reply that the concrete facts themselves are what keep his scepticism from being systematic in any practically objectionable sense. Experience is continually enlarging, and the object-factors of our situations are always getting problematic, making old truths unsatisfactory, and obliging new ones to be found. The object-factors moreover are common to ourselves and others; and our truths have to be mated with those of our fellow men. The real safeguard against caprice of statement and indetermination of belief is that there is a 'grain' in things against which we can't practically go. But as the grain creates itself from situation to situation, so the truth creates itself pari passu, and there is no eternally standing system of extra-subjective verity to which our judgments, ideally and in advance of the facts, are obliged to conform.

There are two great gaps in the system, which none of the Chicago writers have done anything to fill, and until they are filled, the system, as a system, will appear defective. There is no cosmology, no positive account of the order of physical fact, as contrasted with mental fact, and no account of the fact (which I assume the writers to believe in) that different subjects share a common object-world. These lacunae can hardly be inadvertent — we shall doubtless soon see them filled in some way by one or another member of the school.

I might go into much greater technical detail, and I might in particular make many a striking quotation. But I prefer to be exceedingly summary, and merely to call the reader's attention to the importance of this output of Chicago University. Taking it en gros, what strikes me most in it is the great sense of concrete reality with which it is filled. It seems a promising via media between the empiricist and transcendentalist tendencies of our time. Like empiricism, it is individualistic and phenomenalistic; it places truth in rebus, and not ante rem. It resembles transcendentalism, on the other hand, in making value and fact inseparable, and in standing for continuities and purposes in things. It employs the genetic method to which both schools are now accustomed. It coincides remarkably with the simultaneous movement in favor of 'pragmatism' or 'humanism' set up quite independently at Oxford by Messrs. Schiller and Sturt. It probably has a great future, and is certainly something of which Americans may be proud. Professor Dewey ought to gather into another volume his scattered essays and addresses on psychological and ethical topics, for now that his philosophy is systematically formulated, these throw a needed light.


Go Back To The Classic Psychology Journal Articles Page


Go From The Chicago School Back To The Home Page