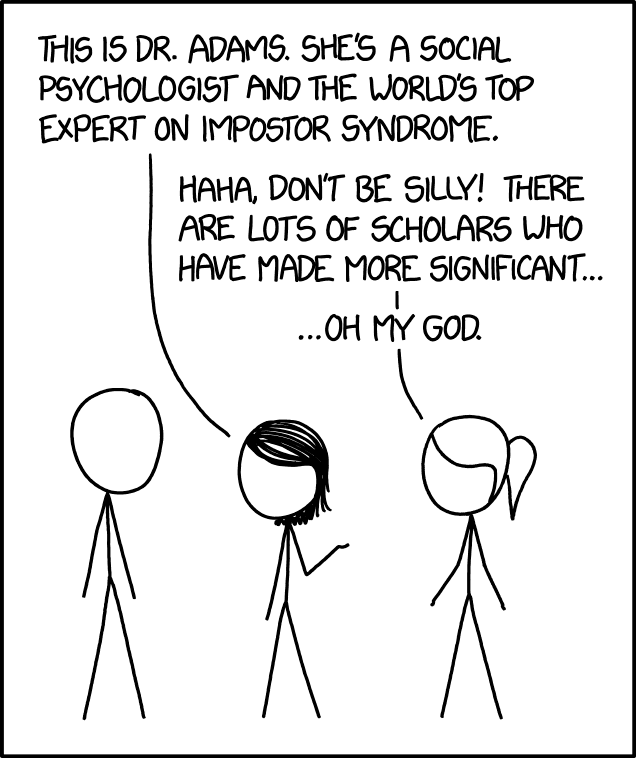 (Cartoon by Randall Munroe via xkcd.com)

To many people, the actress Emma Watson, who plays Hermione Granger in the Harry Potter films, has it all. Talent, beauty, brains, and major acting roles at a young age. Yet Emma – like many people, be they in the world of acting, academia, health or sport – has admitted to feeling like a fraud despite her success.


In an interview with Rookie magazine, Watson said: “It’s almost like the better I do, the more my feeling of inadequacy actually increases, because I’m just going, ‘Any moment, someone’s going to find out I’m a total fraud, and that I don’t deserve any of what I’ve achieved’.”


This is an example of an interesting phenomenon called imposter syndrome – where people are seen as successful by outside external measures but internally they feel themselves to be frauds, undeserving of their success and in danger at any moment of being exposed.


Have you ever had the feeling that you’re in over your head? That you’ve had many successes but somehow you feel you don’t deserve them? There’s been some mistake. You were just lucky that time, the right questions came up in the exam or the interview. And despite all evidence to the contrary, that nagging feeling persists that, at any moment, someone will tap you on the shoulder and say: “You shouldn’t be here.”


Most of us have these feelings from time to time. They are called imposter feelings: feeling that you have misrepresented yourself despite all objective evidence to the contrary. A 1985 article in Time suggested that up to 70% of people will have imposter feelings at some time. It’s normal, and usually, with a bit of perspective and time, people let them pass.

However, for some people the imposter feelings don’t pass and an entire syndrome develops where the person believes they truly are an imposter. They go on to develop behaviours and thinking patterns based on this belief.


The phenomenon was originally described in 1978 by Pauline Clance and Suzanne Imes, two researchers at Georgia State University in the US, based on their work with groups of high achieving women.


Much of the early literature suggested it applied mainly to women but since then, there have been studies showing that many men are also affected. One study suggested that while women worked and competed harder to prove themselves when anxiety was high, men tended to avoid situations where weaknesses could be exposed.


And the imposter syndrome is most obvious in situations where people are measured or evaluated in some way. So it is very common in education systems where people are regularly tested, graded and often ranked. It’s also common in competitive sport, or when you stand up to give a presentation, when you apply for a new job and in many creative fields. At these moments you start to worry that everybody will find out your little secret.

One of the characteristics of the imposter syndrome is that you can never admit it. Because, of course, if you put your hand up and say “I feel like a fraud”, then there’s the possibility that someone will say “ah yes, we were wondering about that, could you please leave now.” So it’s safer to say nothing. But the doubts remain. Even if others are suffering too.


A second characteristic is that the imposter syndrome is impervious to evidence. The person has objective evidence that they are not a fraud. They have passed exams, have certificates, achieved sales targets, made a good presentation. Despite this evidence, the feeling lingers. And people play tricky mind games to discount or ignore the evidence. It was just luck, it was easy, someone helped. The next time will be harder. I fooled them – they just haven’t found me out yet.


For some people, the more successful they become, the worse the imposter syndrome is. After all, there’s more to be exposed now. All that happens is that expectations are raised even higher.


Look at it objectively

So what can you do? Well, you need to force yourself to look at the evidence objectively. One of the great contributions of psychology is to help people realise that feelings are not facts. You can feel like an imposter but that doesn’t make you one. Is it likely that you have fooled everyone? Did you tell lies at the interview? Was it just luck or did you actually work hard on that report?


There’s no simple answer to treating the syndrome but looking at the evidence using CBT and self-awareness can help, as can mindfulness. Learn not to fear success and enjoy it, even if this is easier said than done. Finding a way to channel pressure. This may not rid you of imposter syndrome but it will certainly help you to manage it.