Hikikomori: Understanding the People
Who Choose to Live In Extreme Isolation 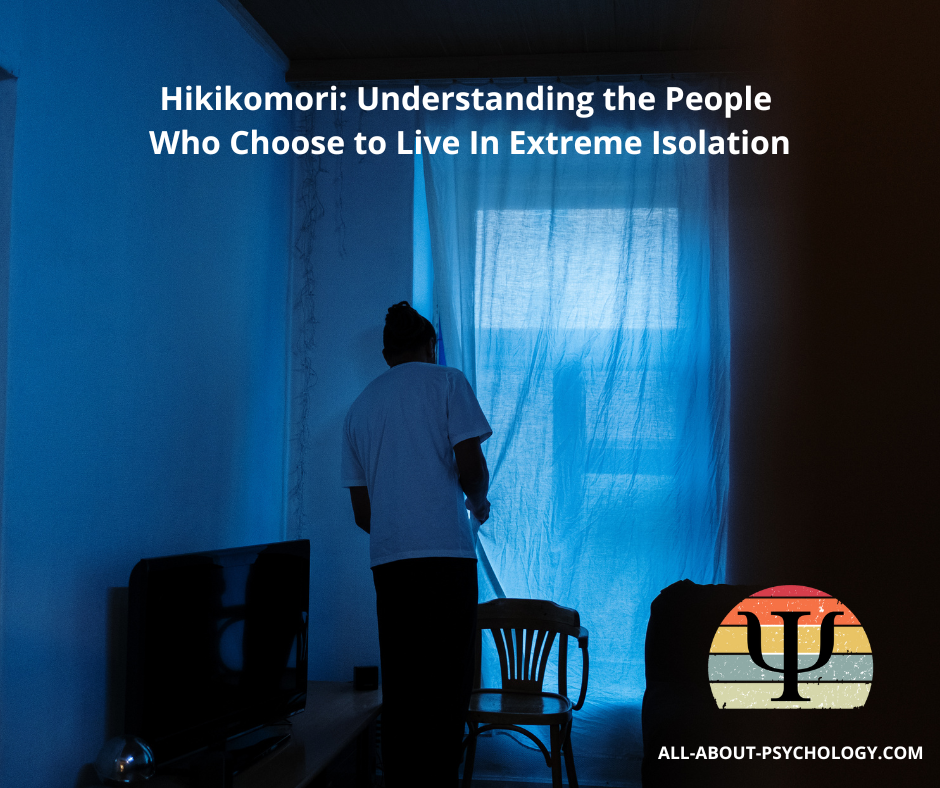 Hikikomori live in a state of extreme and distressing withdrawal.


It’s pretty normal to sometimes feel like you want to hide away from the stresses and pressures of the outside world. In fact, shortlived periods of withdrawal can reduce acute stress responses and can help us overcome illness and exhaustion. Periods of solace and isolation can also help with important phases of development – such as exploring one’s identity during adolescence.


But some people don’t reemerge from natural periods of isolation. Instead, they show extreme and persistent withdrawal lasting for decades, causing distress to themselves and those who care for and support them. In Japan, this pattern of behaviour is so common it’s now known as “hikikomori”.


Problems with extreme social withdrawal in Japanese youth first gained attention during the 1990s. This is the period when Japan endured an economic “ice age”, which prevented many young people from achieving their goals.


Many responded by hiding away to conceal the shame they felt. For some, they didn’t re-emerge. The term hikikomori (derived from the verb hiki “to withdraw” and komori “to be inside”) was coined in 1998 by Japanese psychiatrist Professor Tamaki Saito. Saito chose the term to describe the many young people he saw who didn’t fit criteria for mental health diagnosis, but were nonetheless in a state of extreme, distressing withdrawal.


Hikikomori is currently viewed as a sociocultural mental health phenomenon, rather than a distinct mental illness. Given at least 1.2% of the population (around a million people) are affected, hikikomori is a significant social and health problem. Hikikomori is also increasingly being identified in other countries. The term is now used across the world to describe anyone who fits the criteria.


There are several core features of hikikomori. This includes the affected person being physically isolated in their home for at least six months, cut off from meaningful social relationships, with significant distress and functional impairment – such as avoiding tasks where they might have to interact with someone, or deal with basic self-care needs.


Alongside physical isolation, hikikomori people show an extreme psychological detachment from the social world. Places where active social interaction is expected – such as a school or work – becomes impossible for the person. They remain socially disconnected from those around them whether they are outside their house or not. While some hikikomori people, called soto-komori, can manage some activities outside, they will rarely interact with people. Some may use the internet as a window on the world, but they often won’t interact with others.


Research shows traumatic experiences of shame and defeat are commonly reported as triggers across cultures – such as failing important exams, or not securing a cherished job. It’s possible that Japan’s cultural value system may make this population more vulnerable due to the pressure for collective uniformity and the fear of social shame. Hikikomori people avoid re-traumatisation by choosing to opt out of the “normal” pathway set out for them by society.


Our work on the French hikikomori population and those from other populations show that although many wish society would forget them, they cannot and will not forget the world they left behind. Instead, they passively observe the world via online gaming and social media in a form of “social death”. Experts are also beginning to explore hikikomori’s possible connection with autism, depression, social anxiety and agoraphobia.

Not only does a hikikomori person lose many years of their life in isolation, the condition also affects their family. Typically, Japanese parents of hikikomori people dedicate years to ensure their child’s basic living needs are met. This means there are seldom natural triggers to push them to get help. Mental health as well as educational and social care services are too often focused on responding to more dramatic or visible problems. This leaves families feeling stuck and isolated.


As global recognition of hikikomori increases, the prevalence of the condition is likely to rise. In turn, it will highlight the need for better treatment options. Currently, treatments focus on physical activity, rebuilding the capacity for social interaction, and taking a gradual approach to reengaging with work or study. Therapies that involve the whole family are also being tested.


Recovery may also involve helping hikikomori people find ways of expressing their abilities and talents in a socially acceptable way. For example, the Japanese artist Atsushi Watanabe used art and social activism to help his recovery from hikikomori.


The very nature of hikikomori means that reaching out for help is very unlikely. And perhaps this lifestyle choice could be seen as acceptable because of COVID-19 – especially given many of us are now working from home and are socialising using the internet. Fear of infection, job loss, and social disruption due to lockdown rules could also add to the risk of persistent social withdrawal and detachment for many people.


Our view is that we need to be aware of a potential rise in extreme and persistent social withdrawl during the pandemic. Many young people may currently be feeling hopeless and may not see prospects for a new beginning, or may feel unable to reach their goals. Those that may have lost their jobs as a result of the pandemic may also detach to avoid further shame and suffering. An increase in severe and persistent withdrawal will go unnoticed unless we ensure everyone can get the help they need to stay connected with society.

Know someone who would be interested in reading Hikikomori: Understanding the People Who Choose to Live In Extreme Isolation.