The Feeling of Being Stared At 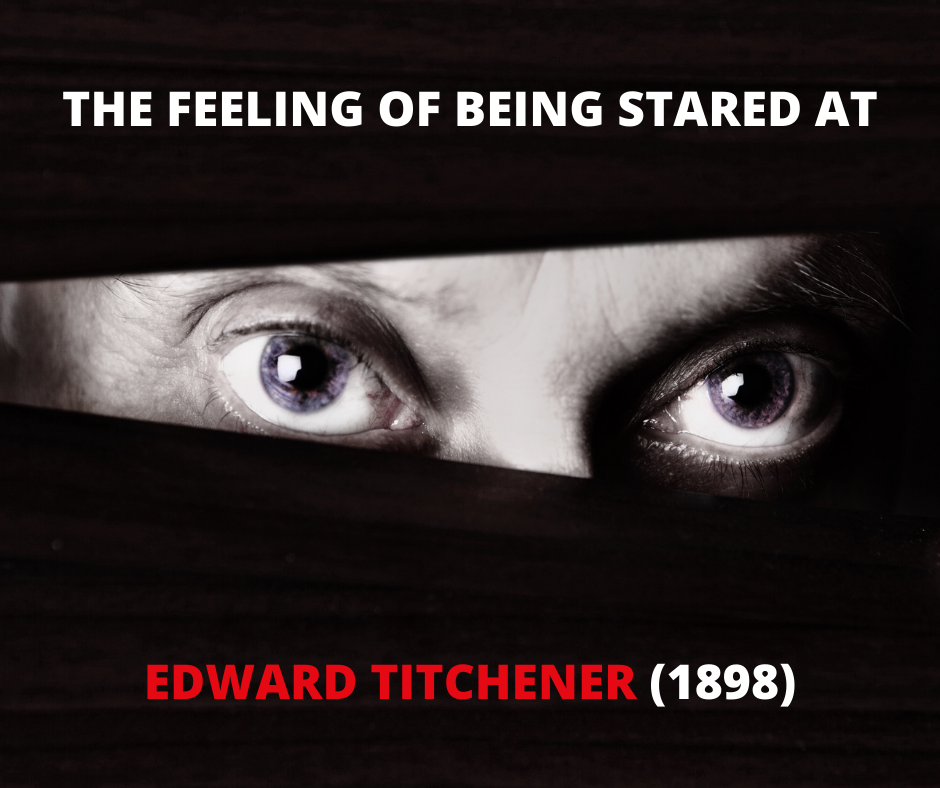 This classic psychology article by eminent psychologist Edward Titchener was first published in the journal Science in 1898.

Every year I find a certain proportion of students, in my junior classes, who are firmly persuaded that they can 'feel' that they are being stared at from behind, and a smaller proportion who believe that, by persistent gazing at the back of the neck, they have the power of making a person seated in front of them turn round and look them in the face. The phenomena are said to occur in any sort of assembly - at church, in the class room, in a public hall. The 'feeling,' when it is not merely described as 'uncanny,''a feeling of Must,' etc., is referred to as a state of unpleasant tension or stiffness at the nape of the neck, sometimes accompanied by tingling, which gathers in volume and intensity until a movement which shall relieve it becomes inevitable. It is believed that this stiffness is, in some way or other, the direct effect of the focussing of vision upon the back of the head and neck.

The belief rests upon a foundation of fact, but (like most popular beliefs) implies a misinterpretation of fact. The psychology of the matter is as follows:

(1) We are all of us more or less 'nervous' about our backs. If you observe a seated audience, before it has become absorbed in the music or lecture for which it came together, you will notice that a great many women are continually placing their hands to their heads, smoothing and patting their hair, and every now and again glancing at their shoulders or over their shoulders to their backs; while many of the men will frequently glance at or over their shoulders, and make patting and brushing movements with their hand upon lapel and coat-collar. This sort of anxiety about the back varies considerably from individual to individual, but most of us are probably aware that we share it to some extent. A friend of mine, who learned to dance after he had arrived at man's estate, told me that it was positively painful to him to turn his back upon the instructor (even during a private lesson), and that it was as positive a relief when he was allowed to face the instructor's back, and posture unseen. Some lecturers are very averse, again, to turning their backs upon an audience, even for the few moments that are required for blackboard writing. It is not difficult to imagine a phylogenetic reason for this shyness, and for the exploring movements of eyes and hands, when we remember that the organs of sight are placed for forward vision, and think of the constant care that must have been devoted to the defenseless back when our ancestors first assumed the upright position. But, however that may be, there can be no doubt of the facts at the present day.

(2) Since it is the presence of, an audience, of people seated behind one, that touches off the movements described above, it is natural that these movements should in many cases be extended so as to involve an actual turning of the head and sweeping of the eyes over the back of the room or hall. Not only is one nervous about one's appearance as viewed from behind; one is also anxious that this nervousness shall not be apparent. It is not good breeding to be concerned about one's looks in a public place. Hence there is often a voluntary continuation of the original ideomotor movements; one looks round enquiringly, as if one were seeking for a special person or event-taking one's direction from some chance noise of falling seats or rustle of dresses, letting one's eyes come to rest upon some patch of intense color, etc., etc. The details differ in different cases; the general mechanism is the same. Observe that all this is entirely independent of any gaze or stare coming from behind.

(3) Now, movement in an unmoved field - whether the field be that of sight, or hearing, or touch, or any other - is one of the strongest known stimuli to the passive attention. We cannot help but attend to movement; and phylogenetic reasons are again not far to seek. Hence if I, A, am seated in the back part of a room, and B moves head or hand within my field of regard, my eyes are fatally and irresistibly attracted to B. Let B continue the movement by looking round, and, of course, I am staring at him. There are, in all probability, several people staring at him, in the same way and for the same reason, at various parts of the room; and it is an accident whether he catch my eye or another's. Someone's eye he almost certainly will catch. Moreover, as there are many others, besides B, who are afflicted with B's restlessness, it is an accident, again, whether my neighbors, to right and left, are also looking at B, or are looking at some part of the room quite remote from B. Both of these accidents, until they are recognized as accidents, evidently play into the hands of a theory of personal attraction and telepathic influence.

(4) Everything is now explained, except the feeling that B experiences at the back of his neck. This feeling is made up, upon its sensation side, simply of strain and pressure sensations which, in part, are normally present in the region (sensations from skin, muscle, tendon and joint), but are now brought into unusual prominence by the direction of attention upon them, and, in part, are aroused by the attitude of attention itself. 'Nervousness' about one's back means, psychologically, constant attention to the sensations coming from, and the mental images of, that portion of the body; and attention, in its turn, means in most cases movement of the part of the body attended to. If one thinks hard of one's knee, or foot, e. g., one will obtain a sure prisingly intensive and insistent mass of cutaneous and organic sensations of which one was previously unconscious, or at best but very dimly conscious; while, at the same time, there is an actual twitching or bracing of the knee or foot, which sets up new sensations. Any part of the body will thus yield up its quantum of unpleasant sensation, if only for some reason the attention can be continuously held upon it, to the exclusion of other topics. The 'feeling of Must' in the present case is no more mysterious than is the 'feeling of Must' that prompts us to shift our position in a chair, when the distribution of pressures has become uncomfortable, or to turn our better ear to the sound that we wish particularly to observe.

(5) In conclusion, I may state that I have tested this interpretation of the 'feeling of being stared at,' at various times, in series of laboratory experiments conducted with persons who declared themselves either peculiarly susceptible to the stare or peculiarly capable of 'making people turn round.' As regards such capacity and susceptibility, the experiments have invariably given a negative result; in other words, the interpretation offered has been confirmed. If the scientific reader object that this result might have been foreseen, and that the experiments were, therefore, a waste of time, I can only reply that they seem to me to have their justification in the breakingdown of a superstition which has deep and widespread roots in the popular consciousness. No scientifically-minded psychologist believes in telepathy. At the same time, the disproof of it in a given case may start a student upon the straight scientific path, and the time spent may thus be repaid to science a hundredfold. The brilliant work of Lehmann and Hansen upon the telepathic 'problem' (Philos. Studies, 1895, XI., 471) has probably done more for scientific psychology than could have been accomplished by any aloofness, however authoritative.