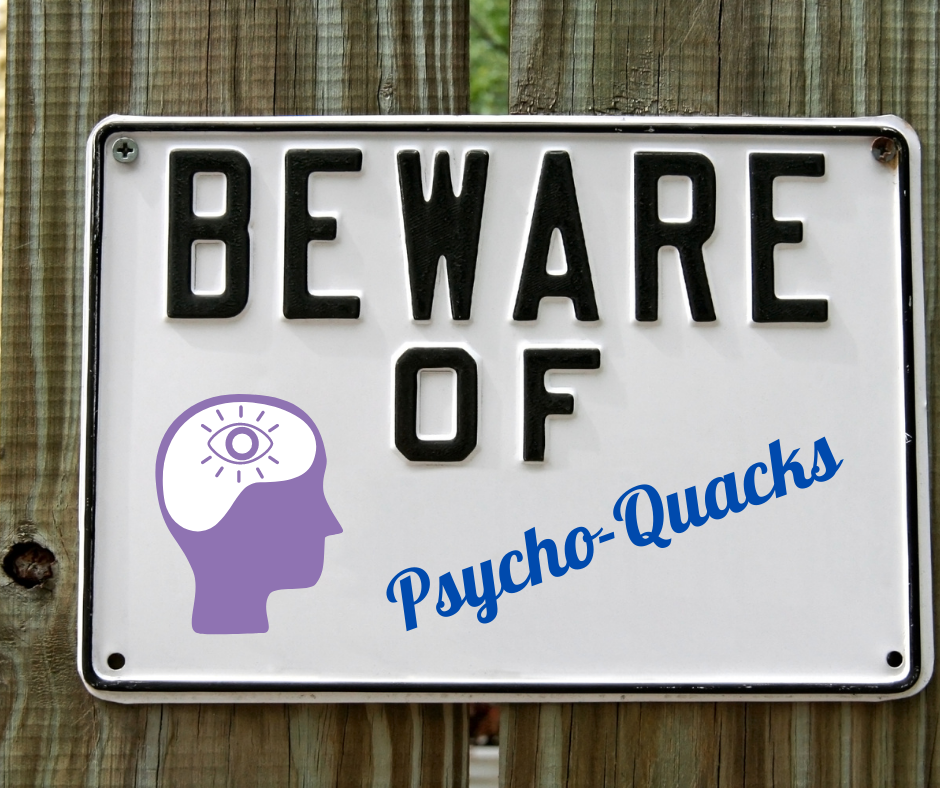 Fab article from 1957 on how to spot a fake psychologist.

There are understandable reasons why the field of psychology is invaded by charlatans who prey on sick minds and emotions. The profession of psychology is so young that its work is only dimly understood by the public. Though the profession has been growing fast, with the number of psychologists doubling in the last seven years, qualified practitioners are still scarce. Only recently have a few states began to protect the public with laws controlling the practice of psychology, and the laws that are on the books are hard to enforce.

It is easy for a faker to pick up high-flown words from books, add mumbo-jumbo of his own and sound more expert than the experts. Finally, and maybe most important, people with problems want pat answers. Legitimate psychology works slowly and cautiously. The psycho-quacks offer immediate, black and white diagnoses and promise sure cures quickly. Incidentally, the phonies don't often pose as psychiatrists because these must be MD.'s under the control of medical-practice laws. Psychologists hold academic but not medical degrees.

So it is in this fertile ground that the charlatans flourish, clustering in big cities like Los Angeles, Chicago and New York. Though they list themselves loosely as "psychologists," the phonies have also adopted or invented a large number of scientific-sounding specialties. There are among the phonies people who pose as graphologists, scientologists, astrolotherapists, numerologists, theosophists, hypnotists, meta-physicians, dianetics auditors, etc.

Many patronize diploma mills that for a price will confer almost any degree you want. One school issues authentic-looking diplomas in psychology for $16. Others ask much high prices but no more effort.

Before taking a harder look at the quacks and how they work, learn first about the men and women they are trying to imitate.

Legitimate Psychology: How it Works

The nations' 16,200 psychologists are highly trained scientists in an exacting profession. Their college degrees range From bachelor of arts in psychology to doctor of philosophy in psychology. About half hold doctorates. To be accepted into the American Psychological Association (which includes most qualified people), a psychologist must have done his studying at an accredited college. In addition, at least a one year internship is required.

Psychology has been divided into some 18 divisions, representing the different specialties of its members. The field discussed here is clinical psychology, which deals with individual, their problems and their emotional adjustments. In this specialty (and in two allied ones), the APA confers diplomate status through its American Board of Examiners in Professional Psychology. To qualify, a psychologist must be a Ph.D., have five years of experience and pass rigorous examinations by the board.

Most clinical psychologists work in institutions and mental health clinics as part of teams that include psychiatrists and social workers and a few hundred practice privately.

The APA recommends that only diplomates in clinical psychology practice by themselves and that they maintain collaboration with medical doctors. This means that a psychologist who hangs out his shingle should have at least 12 years of training for his job. Yet the psycho-quacks with whom these qualified men and women must compete, can enter a school, graduate and start practicing in a matter of days.

What do the legitimate clinical psychologists do? In brief, they are qualified to help an individual work out personal, emotional, educational, social and personality problems as well as marital, family and sexual difficulties. They deal with the school and behavior problems of children and give vocational guidance and aptitude testing.

Diagnosis of maladjustment can be made through psychological testing and through interviewing. Help comes through many hours psychotherapeutic counseling, the aim of why is to help the client understand himself and his problems. Some psychologists have special training in psychoanalysis and use this technique.

Eleven states have in the past ten years passed statutes regulating psychologists, and some 20 others are now considering legislation. In Arkansas, Georgia, Kentucky and Tennessee, anyone offering psychological services for a fee must be licensed by a state examining board. Seven other states - Connecticut, Maine, Maryland, Minnesota, New York, Virginia and Washington have nonmandatory certification laws. Under these an applicant who wishes to use a particular state designation (as "certified psychologist, Virginia") must pass board requirements. Some of the states insist upon a master's degree from an accredited school, and others demand a doctor's degree. From one to five years' clinical experience is required in addition to the degree.

If you live in a fairly large city, turn to the listings in the telephone book's yellow pages under "psychologists." Standing out among simple one-line listings in this generally reliable book you will probably find a hodgepodge of beguiling ads with names followed by impressive sounding degrees you never heard of by references to ologies and isms you can't define.

Six Signs of A Psycho-Quack

1. Advertises and boasts of qualifications and abilities.

2. Talks about other clients, even using their names.

3. May make a physical examination. A legitimate psychologist will send you to an M.D. for a checkup and won't prescribe even so much as an aspirin.

4. Gives a quick diagnosis of your troubles. A real psychologist steers clear of labels, even after long examination.

5. Talks excessively. The psychologist spends most of his/her time listening.

6. Promises a cure - sometimes even stipulating the amount of time or money required.

The ads may read something like this: "Don't worry. Begin to live. See your psychologist." Or they may offer "sympathetic help" in "strict confidence" Or promise "processing" that will lead to "re-evaluation of the subconscious and reactive mind for better survival."

In interpreting the listings, bear in mind that the APA frowns on any advertising other than a listing of the psychologist's name and degrees and the types of services he is prepared to offer. Remember, too, that legitimate psychologists "counsel," but never "advise," "process" or "solve." And they would think it unnecessary to promise sympathy and strict confidence, since both are part of their professional canons.

In the yellow pages you will see plenty of offbeat degrees tossed around. Although Ph.D. (doctor of philosophy) is the only legitimate doctoral degree for a psychologist, you will find such things as Ps.D. ("doctor of psychology"), Ms.D. ( "doctor of metaphysics" ), M.S.S.S. (heaven knows what) and L.L.B. (to be confused, apparently, with LL.B - bachelor of laws).

The degree of Ph.D. is used in ways that cause suspicion, too. An East Coast operator a few years ago used the degrees M.A. and D.D. after his name and taught yoga. As styles changed, however, he quietly became a Ph.D. and offered to counsel all comers on "all problems."

Another danger in the yellow pages is the welter of scientific sounding specialists. Just remember that psychologists practice only the recognized science in which they are trained. Very few use hypnotism or hypnotic suggestion, and at this stage in the use of that psychological tool, the safest thing to do is to steer clear of any hypnotherapists outside the control of a hospital or clinic.

The only psychologists practicing alone that you can be absolutely sure of by looking in the yellow pages, then, are those that have a Ph.D. after their names and a notation that they are diplomates (sometimes abbreviated to DPL) under the American Board of Examiners in professional Psychology (often cut to ABEPP).

A Conservative view of whet the psycho-quacks are like as compared with qualified psychologists is given in a study of twelve of them who practiced in Los Angeles.

Of the twelve, three had never had any university work at all; three had bachelor's degrees from accredited universities but in history, fine arts and business administration, not psychology; and the other six had degrees from nonaccredited and highly suspect institutions.

Five had no postgraduate clinical training. The seven who had "internships" had taken them at nonstandard religious and scientific agencies.

When interviewed, half of the twelve Said they felt no need for further training at all. One ambitious man said he wished he had a degree in business administration.

Only four of the twelve practiced in office buildings of the type almost all qualified psychologists use. Six were in small private buildings, usually converted homes, and the others were in their own homes or a hotel But they were not fly-by-nights. On the average they had practiced in Los Angeles for nine years. Most of them did well enough, too, to devote full time to their practice, although a couple augmented their incomes with lectures.

Typically, they were lone wolves, practicing alone and staying clear of others in the field. Typically, too. they reported they had no desire for interchanging ideas with colleagues. None, of course belonged to any recognized local or national association. Almost none read any regular professional journal.

Although qualified psychologists get most of their clients through M.D's these said most of theirs came from referrals by former or current clients. They treated all ages of people and had few restrictions on the type of mental difficulty they would treat. Five even said they would handle psychotics.

Also, as might be expected, the twelve unqualified practitioners "cured" their patients in less time and with visits at less frequent intervals than professional men require. About half said 6 months of once-a-week treatments did the trick. Legitimate psychologists usually see their clients twice a week for 12 to 18 months.

Do the phonies ever help anyone? Strangely enough, they probably do occasionally. It is as a prominent psychologist once said, "The darndest things help people."

How To Find A Good Psychologist

Among reputable men and women, you have two choices - those in private practices and those in psychological clinics. At clinics, usually in hospitals. schools or family-service centers, you get the benefit of a whole team of experts for maximum safety, and generally the cost is lower. A warmer, closer relationship can often be built up, however, outside clinics. If you do wish to go to a psychologist in private practice, pick a diplomate in clinical psychology.

To find a clinic, ask at the psychology department of the nearest university, at your local public health department or at the social welfare office. Or consult the directory of your state psychological association. National directories of qualified people can also be found at libraries.

Finally, once again, don't depend on the telephone company's yellow pages. As one psychologist complained: "We still need to find a way to move most of the listings for P for psychologist to Q for quack."

If you like psychology, you'll love this great collection of Psychology T-Shirts available from the official All About Psychology Amazon Store. To see the full T-shirt collection, click on the following link or on the T-Shirt images below.

Know Someone Who Would Like To Read This Article?