The Paradoxical Nature of Being Human 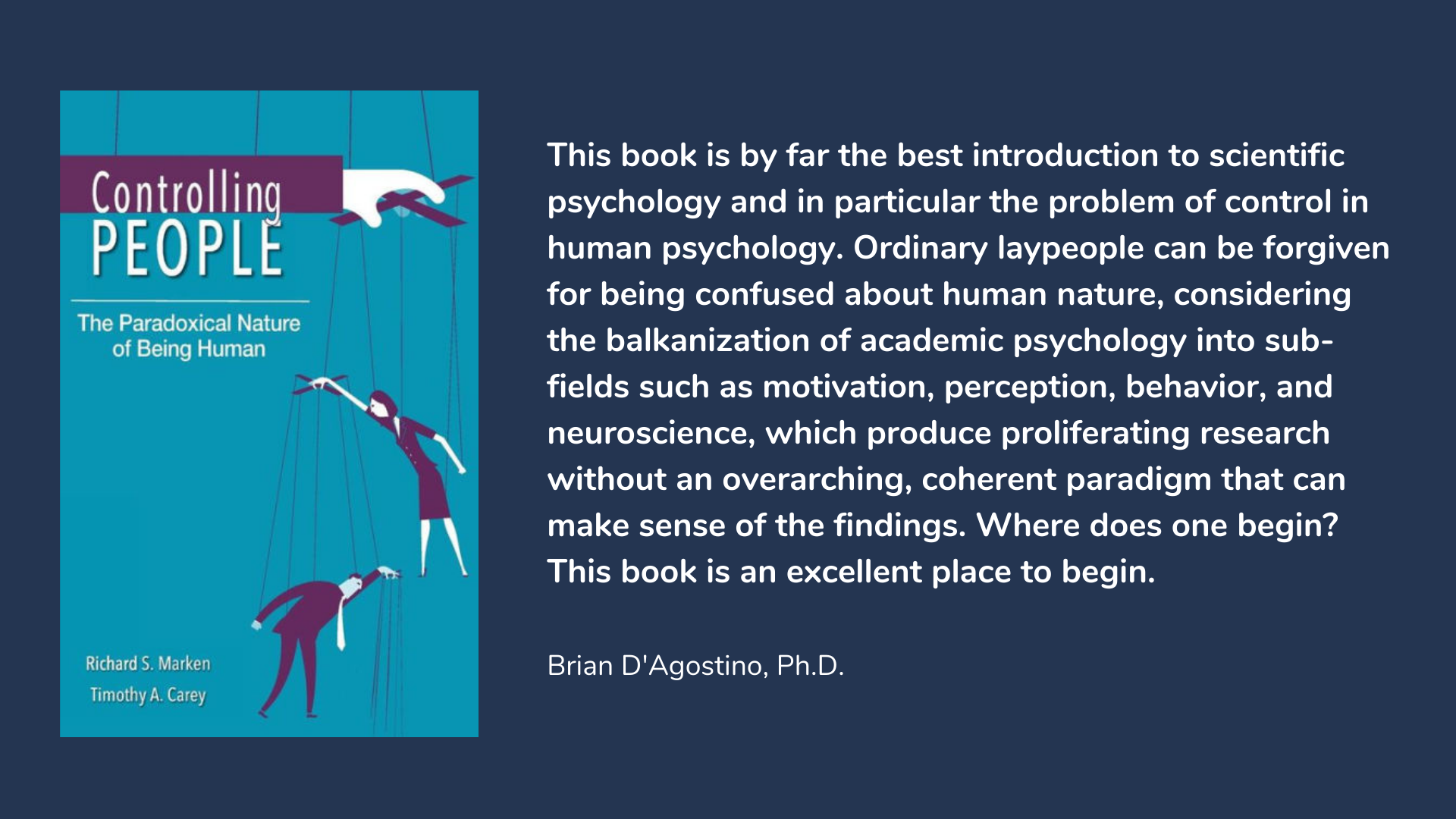 "We need to strive for a world where people control what is important to themselves while minimizing the controlling of others."

We are all controlling people. In fact our feelings of wellbeing depend on staying in control. Just as when we drive a car, we must stay in control in everyday life in order to keep the things we care about going in the right direction.

So how do we do better?

Based on Perceptual Control Theory (PCT), this entertaining and enlightening book by psychologists Richard S. Marken and Timothy A. Carey explores the paradox of why we often lose control by trying to be in control and why our controlling nature makes it difficult to stop this self-defeating behavior. They show that understanding PCT opens the window to understanding and learning about ourselves as controlling people and equips us to lead more effective and satisfying lives.

Controlling People: The Paradoxical Nature of Being Human is available to order from your favorite independent bookseller, Barnes and Noble and in print and kindle versions from Amazon.

Dr. Richard S. Marken is a research psychologist, human factors engineer and statistical consultant and has worked in both academia and the commercial world including at Honeywell, Inc., RAND Corporation and a 15-year stint as an Engineering Specialist at The Aerospace Corporation in El Segundo, CA where he developed methods for rapidly prototyping and evaluating designs for the human-computer interface component of satellite ground control systems. He is the author of four books, including 'Doing Research on Purpose: A Control Theory Approach to Experimental Psychology' and over 50 papers on control system theory and psychology. Dr. Marken's latest book The Study of Living Control Systems published by Cambridge University Press is due for release in February 2021. You can learn more about Dr. Marken's work via his website and you can connect with him online via LinkedIn.

Professor Timothy A. Carey is Director of the Institute for Global Health Research and Andrew Weiss Chair in Research on Global Health at the University of Global Health Equity in Rwanda. A psychologist specializing in clinical psychology with a background in teaching including preschools, special education, and behavior management. He developed the Method of Levels (MOL) and worked closely with William T. Powers, the developer of Perceptual Control Theory. Professor Carey has over 100 publications including journal articles, books and book chapters and also has blogs with Psychology Today and Mad in America. You can connect with Professor Carey online via LinkedIn and Twitter.

Know someone who would love to read Controlling People: The Paradoxical Nature of Being Human?