Conscious Mind, Resonant Brain:
How Each Brain Makes a Mind 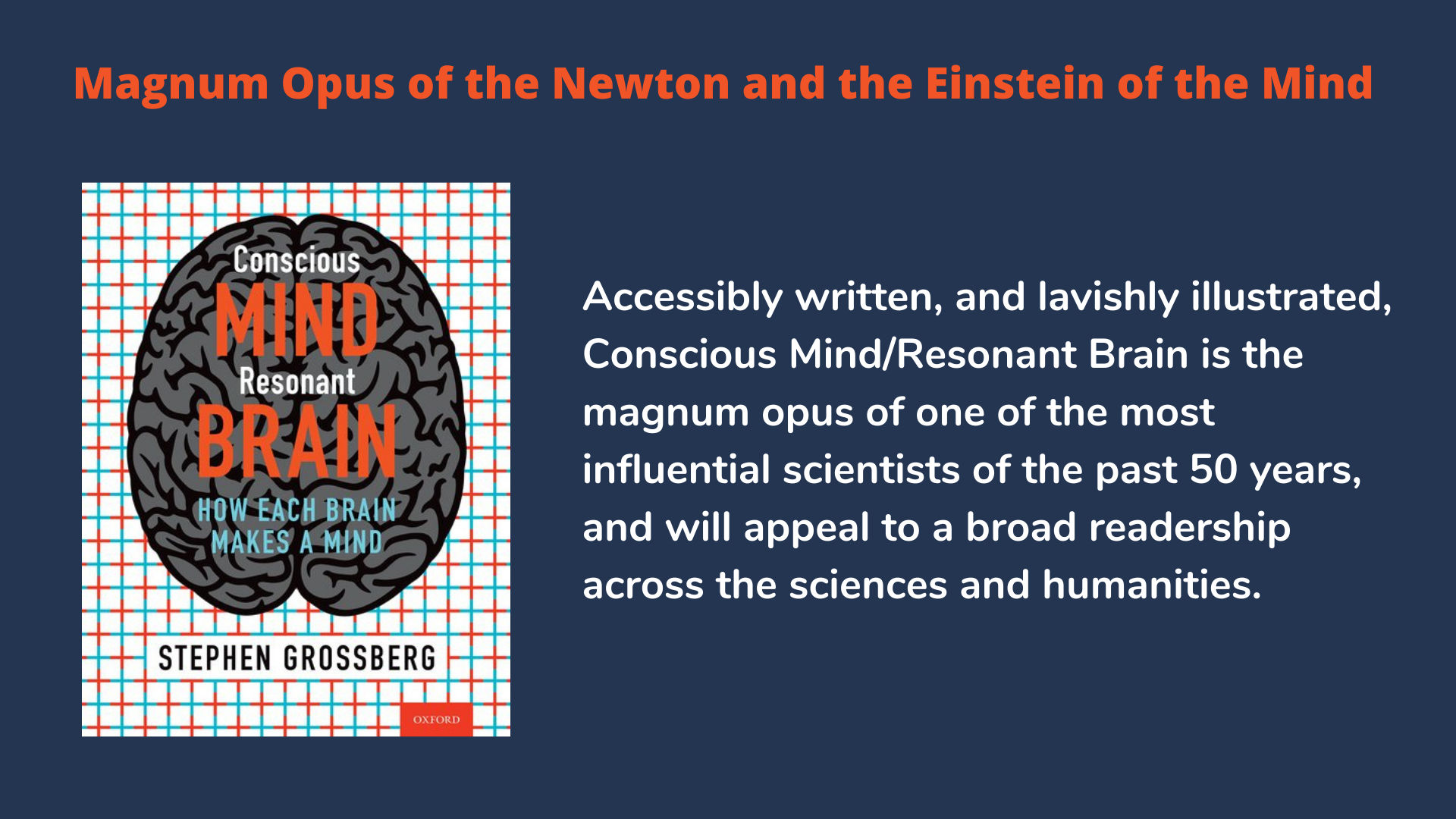 For anyone who does not already know, Prof. Stephen Grossberg is a rare genius and a true pioneer of neural networks. The range, depth, and rigor of the topics he has researched over his illustrious career is just superhuman. By making his lifetime of work accessible to a general audience in the form of this beautiful book, Prof. Grossberg has made an immeasurable contribution to the society at large as it has the potential to spark new ideas and creativity for anyone curious about how their conscious mind works. I am sure the readers would be grateful to him for this valuable gift.(Praveen Kumar Pilly, Senior Researcher in Human-like Artificial Intelligence) 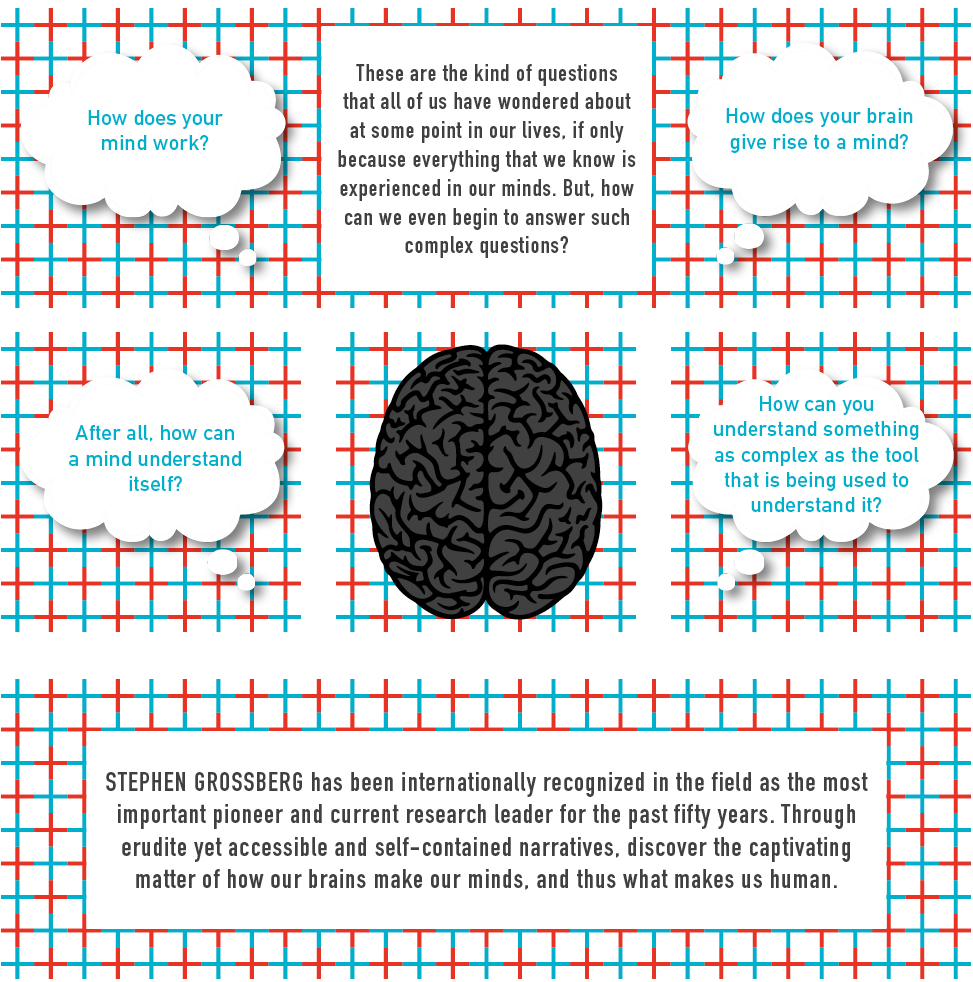 In 1989, Stephen Grossberg gave the annual University Lecture at Boston University to a Boston-area audience. The University President, John Silber, introduced Grossberg as the Newton and the Einstein of the Mind. Silber had done his homework before his startlingly laudatory introduction. Grossberg had already introduced the field of biological neural networks as a college Freshman in 1957 as well as the then-revolutionary paradigm of using nonlinear systems of differential equations to model how brains make minds. These equations included the laws for neuronal activitation, or short-term memory (STM); activity-dependent habituation, or medium-term memory (MTM); and learning and memory, or long-term memory (LTM) that still form the foundation of all biological models of how brains make minds. Grossberg then rapidly began introducing and developing an astonishing range and depth of neural models whose topics today, 64 years later, include essentially all the most important processes of conscious and unconscious human intelligence.

By discovering the foundational laws of how brains make minds, and using them to build unifying theories that explain so much important data, Grossberg has played a role similar to that played by Isaac Newton in his great work on celestial mechanics. This may be why John Silber mentioned Newton in his introduction.

But why Einstein? Albert Einstein was famous for using thought experiments to derive fundamental laws of physics, including both Special Relativity Theory and General Relativity Theory. Thought experiments use familiar facts from daily life to derive profound scientific conclusions. They are a way to make scientific ideas accessible to many people.

Grossberg is a master of using thought experiments to derive profound conclusions about learning, cognition, and emotion. His thought experiments use facts that are familiar to everyone because they represent ubiquitous environmental pressures on the evolution of our brains. In particular, Grossberg published a famous thought experiment in 1980 to derive Adaptive Resonance Theory, or ART, which is currently the most advanced cognitive and neural theory of how our brains learn to attend, recognize, and predict objects and events in a changing world. All the foundational hypotheses of ART have been supported by subsequent psychological and neurobiological experiments, and it has also provided principled and unifying explanations of hundreds of additional experiments.

Nowhere during the thought experiment are the words mind or brain mentioned. ART design principles and mechanisms are thus a universal solution to a learning problem that Grossberg called the stability-plasticity dilemma because it asks how any system can learn quickly without experiencing catastrophic forgetting. Remarkably, ART also explains how humans consciously see, hear, feel, and know things about the world, and use these conscious states to effectively plan and act to realize valued goals.

Grossberg's proposed solution of the mind-body problem thus arises from a computational analysis of how humans and other animals autonomously learn in a changing world. Because the words mind and brain are never mentioned in his derivations, they can be used as a blueprint for designing autonomous adaptive intelligent algorithms and mobile robots for technology and AI.

I am grateful to have had the privilege of doing science as a PhD student with this creative genius. His impact on science, technology, and society will, I believe, continue to grow just as did the contributions of Newton and Einstein. His Magnum Opus may help to make this happen because it articulates Principia of Mind in a self-contained and accessible way to reach the broadest possible audience.


Conscious Mind, Resonant Brain is available to order from your favorite bookseller and in print and kindle from Amazon. 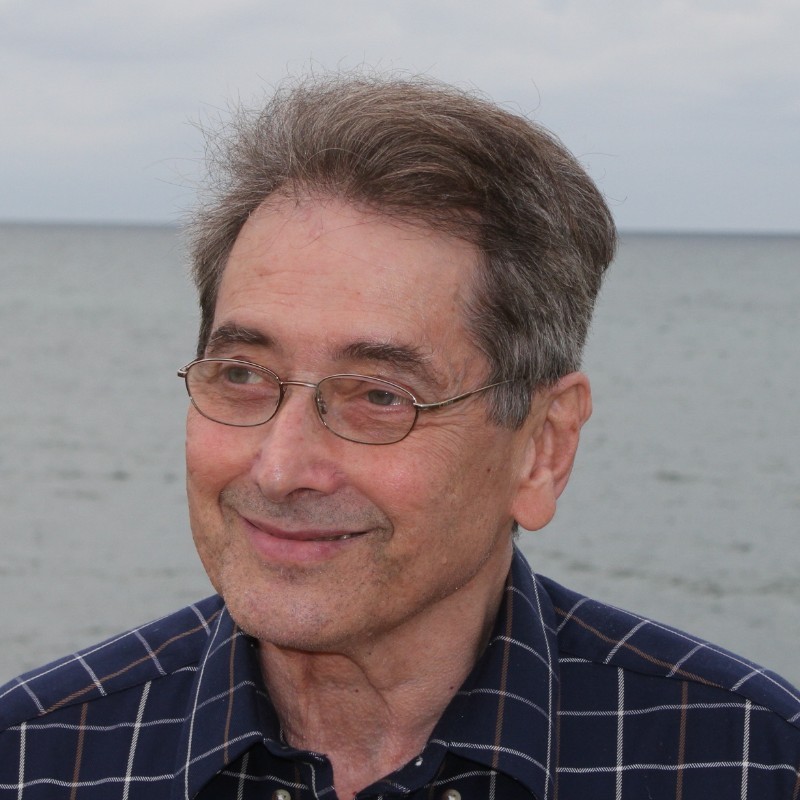 For the past 50 years, since his foundational articles appeared in the Proceedings of the National Academy of Sciences in 1967-1980, Stephen Grossberg has been internationally recognized as the most important pioneer and current research leader who introduces and develops neural network models and mathematical methods for both biological and artificial intelligence. This work has always had its foundation in discoveries about biological and machine learning.

More generally, Grossberg is the world's leading scientist/engineer who discovers and models neural design principles and mechanisms that enable the behavior of individuals, or machines, to adapt autonomously in real time to unexpected environmental challenges. These discoveries have laid the scientific foundations of the revolutionary computational paradigm of autonomous adaptive intelligence, and his neural network models have been applied to many large-scale problems in engineering and technology, notably the design of increasingly autonomous adaptive algorithms and mobile agents. To acknowledge these contributions, Grossberg received the 2015 Norman Anderson Lifetime Achievement Award of the Society of Experimental Psychologists, the 2017 Frank Rosenblatt Award of the IEEE Computational Intelligence Society, and the 2019 Donald O. Hebb Award of the International Neural Network Society. You can learn more about the groundbreaking work of Professor Stephen Grossberg via his Google Scholar page and Wikipedia page.

Know Someone Who Would Love To Read Conscious Mind, Resonant Brain: How Each Brain Makes a Mind?