The Danger of Absolute Thinking is Absolutely Clear 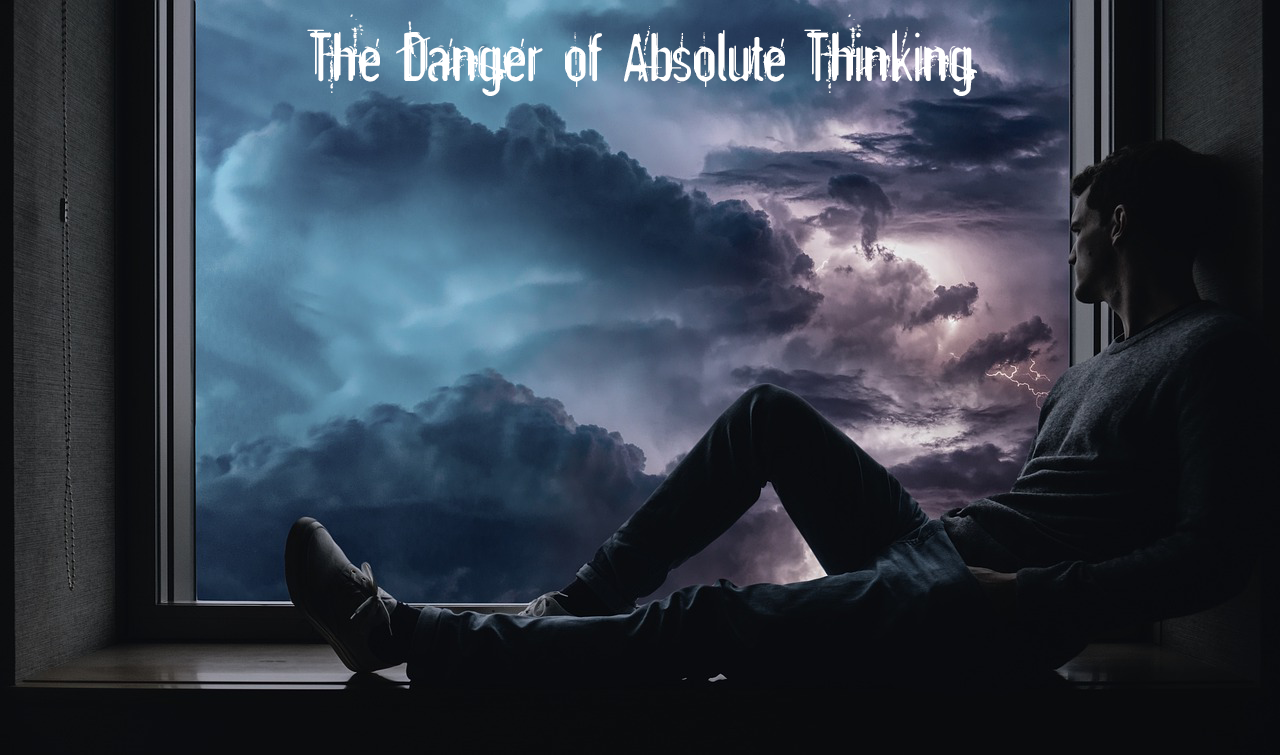 Think of the most happy and well-adjusted person you know – what can you say about their thinking style? Are they dogmatic, with an all-or-nothing outlook on the world? Do they place totally rigid demands on themselves and those around them? When confronted with stresses and misfortunes, are they apt to magnify and fixate on them? In short, do they have an absolutist thinking style?

‘Absolutism’ refers to ideas, phrases and words that denote totality, either in magnitude or probability. Absolutist thoughts are unqualified by nuance and overlook the complexity of a given subject.

There are generally two forms of absolutism; ‘dichotomous thinking’ and ‘categorical imperatives’. Dichotomous thinking – also referred to as ‘black-and-white’ or ‘all-or-nothing’ thinking – describes a binary outlook, where things in life are either ‘this’ or ‘that’, and nothing in between. Categorical imperatives are completely rigid demands that people place on themselves and others. The term is borrowed from Immanuel Kant’s deontological moral philosophy, which is grounded in an obligation- and rules-based ethical code.

In our research – and in clinical psychology more broadly – absolutist thinking is viewed as an unhealthy thinking style that disrupts emotion-regulation and hinders people from achieving their goals. Yet we all, to varying extents, are disposed to it – why is this? Primarily, because it’s much easier than dealing with the true complexities of life. The term cognitive miser, first introduced by the American psychologists Susan Fiske and Shelley Taylor in 1984, describes how humans seek the simplest and least effortful ways of thinking. Nuance and complexity is expensive – it takes up precious time and energy – so wherever possible we try to cut corners. This is why we have biases and prejudices, and form habits. It’s why the study of heuristics (intuitive ‘gut-feeling’ judgments) is so useful in behavioural economics and political science.

But there is no such thing as a free lunch; the time and energy saved through absolutist thinking has a cost. In order to successfully navigate through life, we need to appreciate nuance, understand complexity and embrace flexibility. When we succumb to absolutist thinking for the most important matters in our lives – such as our goals, relationships and self-esteem – the consequences are disastrous.

In a recent research article in Clinical Psychological Science, I and my collaborator, the neuroscientist Tom Johnstone at the University of Reading in the UK, examined the prevalence of absolutist thinking in the natural language of more than 6,400 online members in various mental-health chat groups. From the outset, we predicted that those with depression, anxiety and suicidal ideation would have a more absolutist outlook, and that this would manifest in their style of language. Compared with 19 different online control chat groups on topics from cancer to parenting, the prevalence of absolutist words was approximately 50 per cent greater in depression and anxiety groups, and approximately 80 per cent greater in the suicidal-ideation group.

Despite the correlations, nothing yet suggests that absolutism causes depression. In a third study, we examined groups whose participants believe that they have recovered from a depressive episode, and write positive, encouraging posts about their recovery. We found that positive-emotion words were elevated by approximately 70 per cent, yet they continued to use a high prevalence of absolutist words, significantly greater than control groups and much closer to anxiety and depression levels. Crucially, those who have previously had depressive symptoms are more likely to have them again. Therefore, their greater tendency for absolutist thinking, even when there are currently no symptoms of depression, is a sign that it might play a role in causing depressive episodes.

These findings support the recent ‘third wave’ therapies that have entered clinical psychology. The most well-known of these is ‘mindfulness’, but they all advocate a flexible outlook, acceptance, and freedom from attachments. An early exponent of mindfulness is the noted psychologist John Teasdale, whose lab has produced a litany of empirical data to support its efficacy. In a landmark 2001 study, Teasdale and his colleagues at the University of Cambridge found that an ‘absolutist, dichotomous thinking style’ predicted future depressive relapse.

Many argue that the world is a harsh place, and that it is the stresses and misfortunes in life that make people depressed, not their thinking style. Wrong! Countless people suffer misfortunes and do not get depressed or anxious, while others seemingly suffer no misfortune at all, and are blighted with depression and anxiety. The Stoic philosopher (and former slave) Epictetus opined that ‘men are disturbed not by things, but by the view which they take of them’. A sentiment that is totally, completely and absolutely correct.